Vintage Reading Challenge: WHERE THERE'S A WILL (1940) by Rex Stout 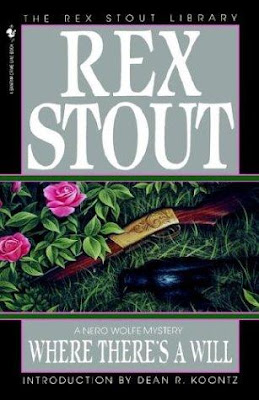 The Vintage Reading Challenge is being hosted by Bev over at MY READER'S BLOCK. This review is my current entry - I'm only a couple of books from my ultimate goal. Of course that won't stop me continuing to read vintage authors since that's something I always do, challenge or not. It's a way of life. Ha!
Most of you know how much I love Stout's Nero Wolfe books, so it's no surprise I'm talking about one of them today. This is a re-read I did Monday night, just for a lark. But then I picked up another Wolfe book and I'm currently re-reading that during meals, so it's possible I've embarked on another Wolfe Binge. (I do this every few years.)Time will tell.

WHERE THERE'S A WILL (1940) is one of my favorite Wolfe books primarily because it's one that reveals a bit more about Archie's character. In a rather melodramatic way (well, melodramatic when it comes to Wolfe), it's a book that is unabashedly about the madness and ramifications of lust. It's also, in a strange way, about the madness of beauty. There's no one to like in this book, except of course, Archie and Wolfe, Fritz and Fred, but that's beside the point, I think.

When millionaire Noel Hawthorne is killed in an apparent hunting accident, and his will leaves his famous sisters April, May and June with nothing but a peach, a pear and an apple, naturally they are concerned. Most of the millions involved have been left to a woman NOT Hawthorne's wife. Actually, the Hawthorne Girls - as they are known in society - seem more concerned that Hawthorne's disfigured wife Daisy, is going to foment a huge scandal by contesting the will and dragging everyone into court including the other woman. Scandal would harm the career of June Hawthorne's husband who is currently Secretary of State of the United States and as such, is burdened with powerful enemies. The Hawthorne Girls want to hire Wolfe to quash the whole thing by getting the parties involved to come to some sort of amicable, monetary solution. But the 'other woman', the enigmatic Naomi Karn appears implacable and sure enough of her own power.

This is one of the rare books in which Wolfe breaks his own rule and leaves the brownstone to visit a client. Unheard of. Fritz the chef, is thrown into a panic. But when the Secretary of State requests your presence even Wolfe cannot refuse. (Never mind that the 'lunch' he is served makes him cringe.)

I hopped out[of the car], went to the corner and entered a drugstore, found a phone booth, and dialed a number. A familiar voice said hello.

"This is Archie, Fritz. Give the plant rooms a buzz."

I glanced at my wrist watch and saw 10:05. "What are you talking about? Certainly

he's up there."
"No, really, Archie. Mr. Wolfe has gone out."
"You're crazy. If he told you to say that - who does he think he's kidding anyhow? Ring the plant rooms."
"But, Archie, I tell you he went. He received a telephone call and went. He gave me messages for you - wait - I wrote them down - First, Saul reported and he arranged to have Orrie relieve him [following the 'other woman']. Second, that owning to your absence he would have to ride in a taxicab. Third, that you are to go in the sedan to the residence of Mr. Hawthorne, deceased, on 67th Street."
"Is this straight, Fritz?"
"Honest to God, Archie. It took my breath."
"I'll bet it did."
I hung up and went back out to the car and told Fred: "A new era has begun. The earth has turned around and started the other way. Mr. Wolfe has left home in a taxicab to work on a case."
"Huh? Nuts."
"Nope. As Fritz says, honest to God. He really has. So if you'll -"
"But Jesus, Archie. He'll get killed or something."
"Don't I know it? You beat it. Go on home and finish your nap...If we need you I'll give you a ring."
"But if Mr. Wolfe - "
"I'll tend to him."
When another murder enters the mix and with the cops are all over the Hawthorne mansion, the sheer audacity of a murderer is revealed. But Wolfe and Archie are stumped until a photograph trips up a not-so-clever killer. The ending, of course, is revealed in Wolfe's office, chock full of suspects and the cops. The usual. Just the way I like it.

An excerpt from the first few moments when Archie appears to have met his match in 'the other woman,' Naomi Karn:

I looked at her. There was no indication whatever of any strain of baby doll in her that I could see. She was close to something new in my experience. She wasn't homely and she wasn't pretty. She was dark rather than light, but she wouldn't have been listed as brunette. None of her features would have classified for star billing, but somehow you didn't see her features, you just saw her. As a matter of fact, after exchanging only a couple of sentences with her, I was sore. During nine years of detective work, I had polished up my brass so that I regarded a rude stare at any human face nature's fancy could devise merely as a matter of routine, but there was something in Naomi Karn's eyes, or back of them, or somewhere, that made me want to meet them and shy away from them at the same time. It wasn't the old come-hither, the "welcome" on the door mat that biology uses for tanglefoot; I can slide through that like molasses through a tin horn. It was something as feminine as that, it was a woman letting a man have her eyes, but it was also a good deal more - like a cocky challenge from a cocky brain. I knew I had looked away from it, and I knew she knew I had, and I was sore.

Don't know how you'd rate it, but in my opinion, that's some damn fine writing. Mystery genre or no mystery genre. And you wonder why I love these books?