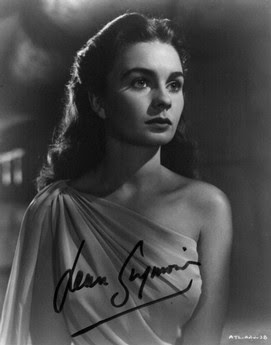 Jean Simmons (along with Glynis Johns) was my favorite actress while I was growing up. She's always held a special place in my movie-toned heart. But, for whatever reason, some of her movies seemed to have disappeared from the airwaves and unless you buy them, you're out of luck. In a perfect world these would ALL be on Netflix (instead of just a few):

SO LONG AT THE FAIR (1950) with Dirk Bogarde
THE BLUE LAGOON (1949) with Donald Houston (The first, and far as I'm concerned, the only version worth seeing.)
THE CLOUDED YELLOW (1951) with Trevor Howard
THE ROBE (1953) with Richard Burton
THIS COULD BE THE NIGHT(1957) with Anthony Franciosa and Paul Douglas
A BULLET IS WAITING (1954) with Rory Calhoun
BLACK NARCISSUS (1947) with Deborah Kerr, David Farrar, Sabu (Simmons only had a small part in this as a native girl, but as usual, she lit up the screen)
HOME BEFORE DARK (1958) with Efrem Zimbalist, Rhonda Fleming and Dan O'Herlihy
GUYS AND DOLLS (1955) with Marlon Brando (she sang in this one and mighty fine, too)
THE BIG COUNTRY (1958) with Gregory Peck
Posted by Yvette at 8:49 AM