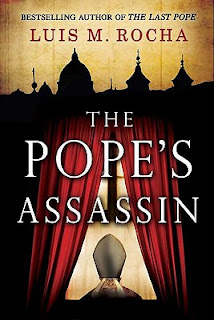 I received this book in arc form from the publisher, Putnam, as part of a Good Reads program where book bloggers sign up to win a specific book for review. Any book blogger is eligible. Just sign up for Good Reads and then head over to the Giveaways. You won't always win, but you might. I liked it better when publishers themselves just sent out arcs to critics/bloggers they liked and left it up to them to review the book or not. But now it seems commonplace to go through these readers groups. I tried it just to see what was what. I may try it again. Actually, I don't think of myself as a 'critic' much anymore. I think of myself as a book lover with preferences.
Normally I don't read 'conspiracy' books but this one sounded interesting. The best religious conspiracy book I've ever read was THE BOOK OF Q by Jonathan Rabb and any book of this sort that I read now or in the future has to try and match Rabb's.
THE POPE'S ASSASSIN by Luis M. Rocha (translated from the Portugese by Robin McAllister) doesn't quite make it, but it is good enough if you're into this sort of thing. I am not fervent about it, but even I enjoyed reading about the dark doings behind the scenes at the Vatican and elsewhere. This is definitely a page turner with non-stop action on almost every page.
According to the author, the Pope has an assassin on hire in order to keep the Catholic Church's best-kept secrets from being uncovered. And wow, what secrets they are. It turns out that when the Dead Sea Scrolls were first discovered in Turkey years ago, there was another papyrus also found - dating back to A.D. 325. The writing on this scroll threatens the very foundation of the Roman Catholic Church - the very 'truth' of the Catholic religion. No wonder the Vatican and, in this case, the Jesuits are at each others' necks to get their hands on the scroll - with assassins on both sides doing their dirty work. One side attempting to gain power over the other.
As those who have been involved in the finding of this scroll meet grisly ends, Father Rafael, the priest/operative who has been the shadowy protagonist in the previous two books by Luis M. Rocha, is once again thrust into the middle of a dangerous conspiracy. I haven't read the previous two books, but I was able to play catch-up very easily. Also involved in this deadly game is the British journalist Sarah Monteiro whose feelings for Father Rafael are conflicted, to say the least.
At the heart of this dark and tortured conspiracy of silence is Ben Isaac, a wealthy Jewish collector in whose impregnable vault resides the scroll which would bring the Catholic Church, indeed, the whole Christian community to its knees. The secret pact that exists between Ben Isaac and the Church has been intact for fifty years. Named the Status Quo, this is the first bit of business every Pope has to read immediately upon election. For his eyes only, of course.
But now, when time on the original agreement is running out, a new Status Quo must be negotiated just when the powerful Jesuit faction of the Church has decided to act.
Bodies pile up, as one after another members of the Church are murdered in the name of God. Towards the end of the book I admit I got a bit confused as to who was who. I wish the author had figured out a way to differentiate between characters in a way that would have made the action clearer. I had to stop and go back and forth as the denouement approached. I think I finally 'got' what was going on, but I'm not a hundred percent sure.
If you're in the mood for a religous conspiracy book, I recommend this one. It will certainly keep your eyebrows raised all the way through. I am a Catholic and I was not really offended by this sort of thing, a bit unsettled yes, but I always kept in mind that this is a work of fiction.