A Saturday Review: THE UNCOMMON READER by Alan Bennett 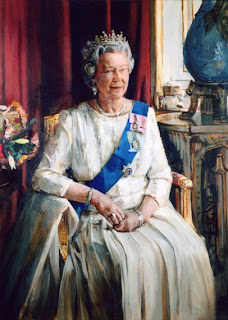 Sorry about the clunky spacing. Google Blogger is at it again. Been acting up all week and there's not much I can do about it. I think there's an html cure but I'm hopeless at that sort of thing. On with the review: Lately I'm reading faster than I'm reviewing. Don't want to get too far behind because then the stories are in danger of fading into the mist of time that is my brain these days. Hence, Saturday Review today: THE UNCOMMON READER by Alan Bennett. A delightful novella. Beautifully written. A great way to spend a few hours of an evening. 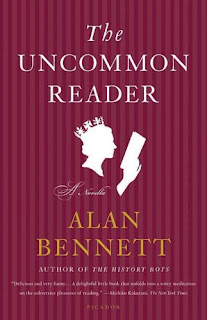 This small book has the aura of 'fairy tale' about it even if it concerns a real person living in a real land. Well, 'real' is relative, especially when you learn that the main protagonist is the current Queen of England. Bennett has conceived a humorous tale with a surprise ending and all I can say is, you'd be silly to miss reading this. Most especially if you love books, reading, writing and, oh yes, libraries.
It all begins with the Queen's obstreperous corgi dogs running amok as usual. One day on the grounds of Buckingham Palace, they run off and as the Queen goes looking for them she discovers an interesting vehicle parked near the palace kitchens: a mobile library van. The City of Westminster travelling library, to be exact. From that moment on, her life and the lives of those around her will never be the same. Books begin to work their insidious magic on the reigning monarch and, in Bennett's story, change the way the Queen views the world and her place in it.
She embarks on an impromptu reading journey which, as much as it benefits her, does nothing but discomfit those who are heavily invested in the status-quo, those whose job it is to see that the Monarchy doesn't ruffle any feathers. With the help of Norman, a literature loving, red-headed lad who works in the kitchens (before the Queen promotes him to 'page,') the Queen discovers a new found passion for the written word.
The appeal of reading, she thought, lay in its indifference: there was something undeferring about literature. Books did not care who was reading them or whether one read them or not. All readers were equal, herself included. Literature, she thought, is a commonwealth; letters a republic. Actually, she had heard this phrase, the republic of letters, used before, at graduation ceremonies, honorary degrees and the like, though without knowing quite what it meant. At that time talk of a republic of any sort she had thought mildly insulting and in her actual presence tactless, to say the least. It was only now she understood what it meant. Books did not defer. All readers were equal...
I loved this book. I'm pretty sure you will too.

Alan Bennett is also the author of THE HISTORY BOYS and THE MADNESS OF KING GEORGE as well as many other plays and books. Read more about Bennett and his work here.
Posted by Yvette at 12:25 PM