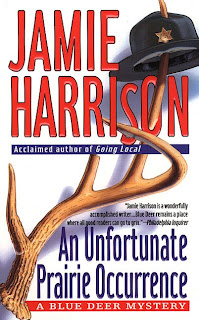 I'm in a bit of a bind here wanting to recommend all four books in this truly wonderful short-lived series, but only finding one on my shelves and not the first, but the third. Of course I've read all four books over the years but if you expect me to remember them in particular detail, then both of us are doomed to disappointment. (I always laugh when I think about the title of this meme: Forgotten Books Friday. Right. Truer words were never spoken.)

Old lady memory strikes again. All I can tell you is that these four titles by Jamie Harrison are some of the funniest, slyest, dryly wittiest, engagingly well-written books you will ever read. They leave a happy resonance in my faulty memory - a lingering, pleasant aftertaste of delight. That's why I'm recommending them today for the Friday's Forgotten Books meme usually hosted by Patti Abbot at her blog, PATTINASE. But filling in today for Patti is Rick at his blog, THE BROKEN BULLHORN. Link here to read all the contributors and their contributions.

What I'm going to do is post a choice excerpt from the AN UNFORTUNATE PRAIRIE OCCURRENCE which will give you a good idea of the sort of writing I'm talking about, the sort of writing I favor, and the sort of writing you should not miss. I will add though, that for whatever reason, Jamie Harrison appears to have stopped writing - I can't find any other books by her in any form. It's a damn shame, but who knows what life has thrown her way. Maybe someday, she'll return to her fictional world of Blue Deer, Montana and pick up the story where she left off.

Jules Clement was brown-haired, tall and angular. He was thirty-five and essentially solitary, currently locked into an unhappy phase in an at best intermittent love life. He had a fairly good sense of humor, but it had been beaten down lately by work. He was good at his job, despite a lack of self-confidence or despotic practicality. Jules was that final anomaly, a liberal officer of the law.

From the New York Times Book Review:<p>"Harrison takes her time resolving these criminal matters, allowing us to linger in Blue Deer long enough to learn its history, drink in the scenery and laugh at the kinks and quirks of its idiosyncratic residents. No wonder the world-weary Jules came running back home the first chance he got - the place is heaven."

Big Sky, old bones, and murderous obsession. Blue Deer Montana has it all.
The four titles in the series: