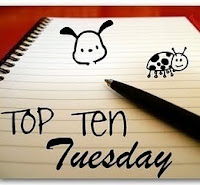 Well, you know we mean Top Ten Nasty Women, but 'girls' sounds better. Ha! Top Ten Tuesday is the fun weekly meme hosted by the gals at THE BROKE AND THE BOOKISH. This week's topic: Top Ten Mean Girls We'd All Like to Slap Good and Proper. (I added that last part.) Link here to see who else is participating and what their choices for this week's list are.

1) Susan Silverman from most of the Spenser private-eye books by the late, great Robert Parker. Susan is Spenser's psychiatrist girlfriend though I've always felt she needed the psych care more than anyone else. Ha! I simply cannot stand her. Never could. I would not slap her because Spenser would get on my case, not to mention Hawk. Since these men are simply besotted with Susan, for reasons that totally escape me, I continue to loathe her and her modern woman simpering ways from afar. (Eat a piece of freakin' bread - why don't you!?)

2) Ophelia and Daphne de Luce - from the books by Alan Bradley - the 'wicked' teenage sisters of 11 year old budding detective and chemist, Flavia de Luce. These are satisfying mysteries (beginning with THE SWEETNESS AT THE BOTTOM OF THE PIE) set in the idyllic (at least in memory) English countryside of the 1950's. With two sisters like these, Flavia is put through the ringer since her dad, totally immersed in his stamp collection, appears clueless.

3) A certain Oxford professor, a very dangerous woman with a nefarious father -near the end of THE BEEKEEPER'S APPRENTICE by Laurie R. King, who makes Mary Russell's life a living hell - not to mention, Sherlock Holmes. I can say no more.

5) Mrs. Danvers from REBECCA by Daphne du Maurier. A housekeeper from hell. But she kept Manderley tidy.

6) Miss Holloway the loony-toons sanatorium owner from Dorothy MacArdle's book and film, THE UNINVITED. She is so devoted and has such an unhealthy love for a deceased woman that she sends the young heroine to what may be certain death. (Sounds like Danvers. Maybe they're related.)

7) Mrs. Reed from JANE EYRE by Charlotte Bronte. The aunt - also from hell - who does get her comeuppance, but too late.

9) The Queen of Hearts from ALICE IN WONDERLAND by Lewis Carroll. Oh, for sure. Off with her head!
10) Julia McGee from TOO MANY CLIENTS by Rex Stout. Wolfe looked at Julia McGee and said in a voice as hard as hers had been, "You're no longer needed. Go." She started to speak, and he snapped at her, "No. My eyes are inured to ugliness, but you offend them. Get out. Go!" She got up and went.