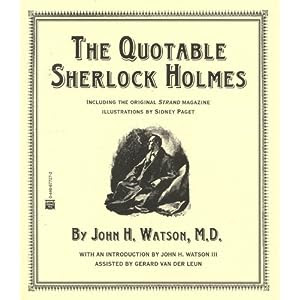 Since I posted some of my favorite Phillip Marlowe quotes earlier this week, I thought I'd do the same for Holmes. These quotes have been handily collected in one nice little book by John H. Watson, M.D. With An Introduction by John H. Watson III and Assisted by Gerard Van Der Leun.

From: THE ADVENTURE OF THE ABBEY GRANGE

"Come, Watson, come! The game is afoot. Not a word! Into your clothes and come!" (This my favorite quote from any character in any book ever.)

From: THE VALLEY OF FEAR

"Mediocrity knows nothing higher than itself; but talent instantly recognizes genius." (My second favorite quote ever.)

From: THE GREEK INTERPRETER

"...There are many men in London, you know, who, some from shyness, some from misanthropy, have no wish for the company of their fellows. Yet they are not averse to comfortable chairs and the latest periodicals. It is for the convenience of these that the Diogenes Club was started, and it now contains the most unsociable and unclubbable men in town. No member is permitted to take the least notice of any other one. Save in the Stranger's Room, no talking is, under any circumstances, allowed, and three offenses, if brought to the notice of the committee, render the talker liable to expulsion. My brother was one of the founders, and I have myself found it a very soothing atmosphere."
From: THE CROOKED MAN
"It's every man's business to see justice done."
From: A STUDY IN SCARLET
"The plot thickens."
From: THE FIVE ORANGE PIPS
"I have been beaten four times - three times by men, and once by a woman."
From: A STUDY IN SCARLET
"Let me see - what are my other shortcomings? I get in the dumps at times, and don't open my mouth for days on end. You must not think I am sulky when I do that. Just let me alone, and I'll soon be right. What have you to confess now? It's just as well for two fellows to know the worst of one another before they begin to live together." Speaking to Watson.

From: THE HOUND OF THE BASKERVILLES

"Evil indeed is the man who has not one woman to mourn him."
From: THE BOSCOMBE VALLEY MYSTERY
"Singularity is almost invariably a clue. The more featureless and commonplace a crime is, the more difficult it is to bring home."
From: THE BOSCOMBE VALLEY MYSTERY
"There is nothing more deceptive than an obvious fact."
From: THE VALLEY OF FEAR
"When you have one of the finest brains of Europe up against you, and all the powers of darkness at his back, there are infinite possibilities."
From: THE FINAL PROBLEM
"You know my powers, my dear Watson, and yet at the end of three months I was forced to confess that I had at last met an antagonist who was my intellectual equal. My horror at his crimes was lost in my admiration of his skill."
From: THE FINAL PROBLEM
"He is the Napoleon of crime, Watson. He is the organizer of half that is evil and of nearly all that is undetected in this great city. He is a genius, a philosopher, and abstract thinker. He has a brain of the first order."
From: THE RED-HEADED LEAGUE
"I love all that is bizarre and outside the conventions and humdrum routine of everyday life."
From: THE BOSCOMBE VALLEY MYSTERY
"You know my method. It is founded upon the observation of trifles."
From: THE SIGN OF FOUR
"Women are never to be trusted - not the best of them."
From: THE MAN WITH THE TWISTED LIP
"I have seen too much not to know that the impression of a woman may be more valuable than the conclusion of an analytical reasoner."
From: THE RED-HEADED LEAGUE
"It is a hobby of mine to have an exact knowledge of London."
From: THE GREEK INTERPRETER (Talking about his brother Mycroft.)

"I said that he was my superior in observation and deduction. If the art of the detective began and ended in reasoning from an armchair, my brother would be the greatest criminal agent that ever lived. But he has no ambition and no energy. He will not even go out of his way to verify his own solutions, and would rather be considered wrong then take the trouble to prove himself right. Again and again I have taken a problem to him, and have received an explanation which has afterwards proved to be the correct one. And yet he was was absolutely incapable of working out the practical points which must be gone into before a case could be laid before a judge and jury."

From: THE ADVENTURE OF THE COPPER BEECHES
"It is my belief, Watson, founded upon my experience, that the lowest and vilest alleys in London do not present a more dreadful record of sin than does the smiling and beautiful countryside."
From: A STUDY IN SCARLET
"Read it up - you really should. There is nothing new under the sun. It has all been done before."
From: THE SIGN OF FOUR
"How often have I said to you that when you have eliminated the impossible, whatever remains, however improbable, must be the truth?"
From: THE HOUND OF THE BASKERVILLES (Speaking to Watson.)

"I am bound to say that in all the accounts which you have been so good as to give of my own small achievements you have habitually underrated your own abilities. It may be that you not yourself luminous, but you are a conductor of light. Some people without possessing genius have a remarkable power of stimulating it. I confess, my dear fellow, that I am very much in your debt."

From: HIS LAST BOW
"Here is the fruit of my leisured case, the magnum opus of my latter years, PRACTICAL HANDBOOK OF BEE CULTURE, with SOME OBSERVATIONS UPON THE SEGREGATION OF THE QUEEN. Alone I did it. Behold the fruit of pensive nights and laborious days when I watched the little working gangs as once I watched the criminal world of London." 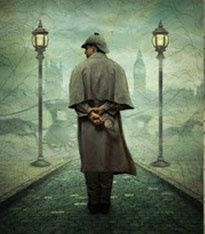