Monday Book Review: ONE OF OUR THURSDAYS IS MISSING by Jasper Fforde 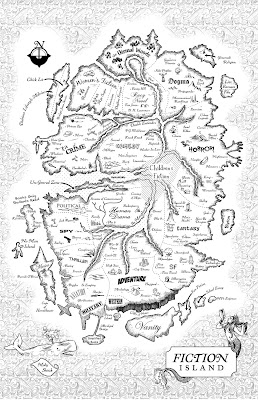 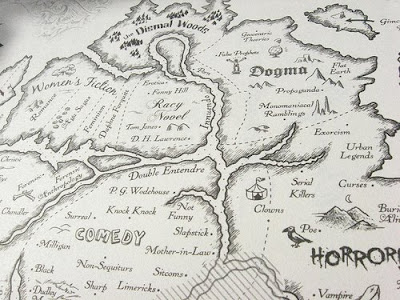 ONE OF OUR THURSDAYS IS MISSING is the sixth entry in the Thursday Next series by the ever witty, ever confounding, ever brilliant Jasper Fforde - a resident of "...the Socialist Republic of Wales..." where it's "...Not Always Raining."
The Thursday Next oeuvre takes place in a kind of alternate universe where familiar things are made unfamiliar at the author's whim. I would say that if you do not have a love of the English language, literature, reading, puns, absurdity and British humor, then these books are probably not for you. Otherwise, read on.

This time out, the 'real' Thursday Next, famed literary detective has gone missing (from the real world) and the book is told from 'the written' Thursday Next's point of view. That is, the Thursday Next who appears in the books we've read so far beginning with THE EYRE AFFAIR - rather than the actual Thursday Next on whom the books are based.

This Thursday Next is one of several on call 24/7 to carry through the scenes in the previous books in case a reader should happen by. Truth be told, the readership of the Thursday books has gone by the wayside and this Thursday is kind of happy to have something to do, i.e. search for the missing Thursday. In the meantime, another Thursday Next - a stand-in named Carmine - has taken over book duties in case, as I said, a reader should happen along.

To explain how BookWorld operates as, say, opposed to the Real World invented by Fforde would take all day, time I've got but wherewithal I haven't. Fforde is better at explaining things and if you really want to know all the details, read the books.

Here's the gist of it: BookWorld (which exists on a different plane than our 'reality') is controlled by the powerful Council of Genres: The Council of Genres is the administrative body that looks after all aspects of BookWorld regulation, from policy decisions in th emain debating chamber to the day-to-day running of ordinary BookWorld affairs, supply of plot devices and even the word supply coming in from the Text Sea. It controls the Book Inspectorate, which governs which books are to be published and which to be demolished, and also manages Text Grand Central and Jurisfiction.

Bradshaw's BookWorld Companion (11th Edition)
The BookWorld is inhabited by every character, every genre, every plot device, every setting, every letter (The Sea of Text), every motivation, every anything you can think of having to do with the creation of books exists for the benefit of the reader who has no notion that the Book World exists at all. The reader (you and me) is never aware of the panoply of moving parts while reading a regular book or e-book.

The reader naturally assumes that the author created the book he or she is holding or viewing off a screen. Little does the reader know that BookWorld uses writers as a sort of conduit.

To avert a potentially devastating genre war, written Thursday Next is called in to search for the missing literary detective who was to serve as an emissary at the scheduled peace talks. But enemies on both sides of the issue do not want her to succeed and written Next must pretend that the 'real' Next isn't missing at all while her search in the BookWorld (with a fast moving side trip to Real World in which she meets the man of her dreams, the real Thursday Next's husband Landen Parke-Laine) takes her from genre to genre with the help of her new-found butler, the endearing mechanical man, Sprockett. They barely survive an attack by 500 mimes when their car is forced off an inter-genre road by another attack by the mysterious Men in Plaid who are frequently after Next currently wanted by the Goliath Corporation (who basically controls the Real World) for a bunch of spurious criminal charges.

Anyway, the peace talks will go on with or without Next, but without, they have little chance of succeeding. An inter-genre war is not a pretty thing to contemplate. The stability of the entire BookWorld is in written Thursday's unsteady hands, especially since she has been manipulated into attending the Peace Talks masquerading as the 'real' Thursday.

Never has the Book World seemed such a daunting place. (See the Map above.)

Rumor had it that undiscovered genres were hidden among the thick vegetation and impenetrable canopy in the far north of the island. Primitive, anarchic, strange and untouched by narrative convention, they were occasionally discovered and inducted into the known BookWorld, where they started off fresh and exciting before ultimately becoming mimicked, overused, tired and then passe. BookWorld naturalists argued strongly that some genres should remain hidden in order to keep the BookWorld from homogenizing, but their voices went unheeded.
Bradshaw's BookWorld Companion (3rd Edition) 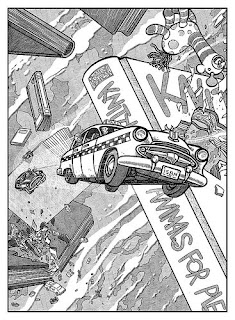 Dark Reading Matter: the hypothetical last resting place of books never published, ideas never penned and poems held only in the heart of poets who died without passing them on. Theoretical bibliologists have proved that the Background Story Radiation was appreciably more than the apparent quantity of STORY in the BookWorld. No one had any idea where it might be or how you could reach it. DRM'S existence remained theoretical, at best.

Did I mention that these books are also accompanied by b/w illustrations? (Though, strangely, there is no illustration credit given in the book. That I can find, anyway.) Well, they are. Also at the end of the book, you'll find some intriguing ads featuring items and places from the book. Fforde's imagination apparently knows no bounds.

I love these books.

For a complete listing of Jasper Fforde's books, please use this link. You might also want to check out Fforde's inventive, highly imaginative and often confusing (part of the charm), website.