Monday Book Review: TOO MANY CLIENTS (1960) by Rex Stout 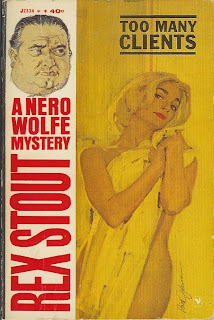 Okay, I have officially embarked on a Nero Wolfe Reading Binge. It happens to me - every few years. I pick one or two of the paperbacks from my collection and begin reading idly, then before you can say, "Satisfactory..." I've gone through a bunch of 'em. Reading other things in between, of course, so I'll be talking about other books as usual. But you'll be seeing a few more Wolfe reviews on the blog. Don't quite know how to handle my reading jags since I've never had one while blogging before, so please bear with me, I'm on a learning curve.

In TOO MANY CLIENTS, Nero Wolfe and Archie Goodwin play fast and loose with the law, tamper with a crime scene, obstruct an investigation AND get away with it. It's risky business, all hell would break loose if Inspector Kramer learned the truth - Wolfe's private eye license would be kaput. But hey, their bank funds are low and all Wolfe and Archie are trying to do is work up a client with a big fee. One can hardly blame them.


When a man shows up at Wolfe's office, identifies himself as Thomas Yeager, executive Vice President of Continental Plastics and hires Archie Goodwin to follow him to a certain NYC address on 82nd Street, to see who, in turn, is following him - Yeager - Goodwin takes on the job just to get out of the office and do something that might be finessed into something bigger.


When later, a man named Thomas Yeager is found shot to death in a Con Ed hole dug in the sidewalk in front of a certain address on 82nd Street. Archie realizes that the man who'd first hired him the day before was an impostor. The dead man is the real Yeager.


Archie being Archie and even though they don't have a paying client, he goes anyway to the 82nd street address and talks his way past Mr. and Mrs. Perez - the super and his wife. On the top floor of the building, he finds a large room, papered in gleaming red, bedecked with erotic paintings and obviously set up as Thomas Yeager, Executive Vice President of Continental Plastics' rather vulgar trysting nook. (Champagne and caviar in the refrigerator.) Archie, ever the clear-thinker, calls in Fred Durkin (one of three operatives he and Wolf work with) and instructs him to make himself at home in the red room - see who turns up - see what fish they can catch. Sure enough, women being popping up to retrieve forgotten items. Fred gets his face scratched and Archie almost gets slapped.


But once Wolfe and Archie finagle a client out of the mess of mixed identities and murder, they continue to keep the existence of the red room to themselves. The cops have not linked anything in the 82nd street address to the dead body in the hole in the sidewalk. Yeager secretly transferred ownership of the building to Mr. and Mrs. Perez, so his name is not on any official papers linking him to the address, after death.


Wolfe has been hired by the client not so much to find a murderer, but to keep the scandal of the red room from exploding all over the front pages and soiling the corporation. Archie has also, theoretically, been hired by Mr. and Mrs. Perez to keep them from being charged with Yeager's murder should the cops learn of the top floor room. (They swear they didn't know they'd inherit ownership of the building upon Yeager's death.)


Archie doesn't believe the Perez family had anything to do with Yeager's death, especially when a second murder occurs - the victim, attempting a spot of blackmail, is shot with the same gun that killed Yeager.


Rex Stout has two intriguing mysteries going on in TOO MANY CLIENTS: who committed the murders AND can Wolfe and Archie skirt the law, keep the red room a secret from the cops and earn a giant fee? You betcha'. The fun is in how the manage to do it.


Although the motive for the initial murder is a bit weak in my opinion, the deception going on is wickedly entertaining and the way that Archie initially finagles his way into the investigation is a joy to read about - what an operator!


There is an incident which may disturb modern day sensibilities near the end of the book when a cheating wife is beat up by her husband (no matter that what she was doing was vile) and this is more-or-less overlooked by the author and by Archie, but I remind you that those were the laws in those days. And it isn't as if Archie thinks it's okay. He doesn't. That was then, this is now.)


Despite that, another terrific book by Rex Stout and even better, I had forgotten who did it. Ha!

Email ThisBlogThis!Share to TwitterShare to FacebookShare to Pinterest
Labels: Review, Rex Stout, TOO MANY CLIENTS, Vintage