NATIONAL TRAIN DAY- Saturday, May 7 - A Week Ahead of Time 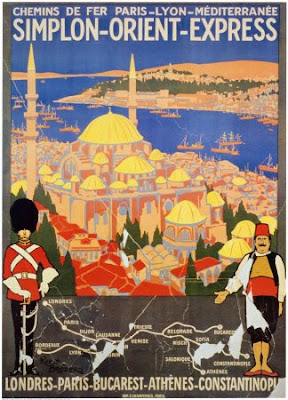 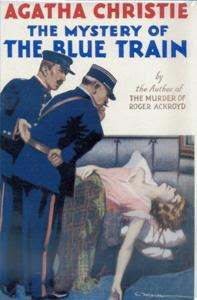 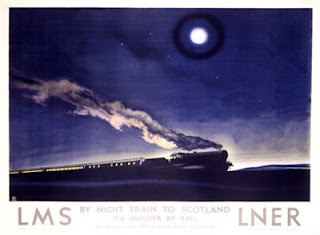 Next Saturday, May 7th is National Train Day but since it's also the day before Mother's Day, I'm posting a week early in order to give trains their full and worthy due. (I have a special Mother's Day post lined up for next Saturday since, ahem, I'll be busy on Sunday with Mother's Day duties. A heaping BIG THANKS to Jacqueline over at Another Old Movie Blog for cluing me in on this greatest of all days - at least for those of us who adore trains and train travel. (I've done very little travel on trains in reality, but in my dreams, ah, my friends, I've been there and back.) Be sure and read Jacqueline's fun train post. 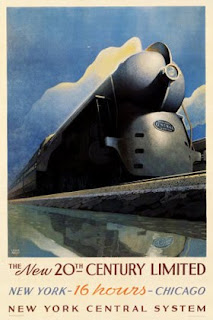 Eleven Films in which Trains are, at least, part of the action: (I realize that there are many more films in which trains are featured but I wanted to stick with films I've actually seen.)
1) MURDER ON THE ORIENT EXPRESS (1974) by Agatha Christie (1934) - The mother of all train films and books, I suppose. The train in the film directed by Sidney Lumet is beautifully and affectionately photographed. The film's music doesn't work, but other than that, it's a terrific film. Even if for you, like me, Finney is not the ideal Poirot.
2) THE MYSTERY OF THE BLUE TRAIN (2006) An excellent PBS Mystery version of a good book by Agatha Christie (1926). Not filled with many sympathetic characters, the mysterious death of a spoiled heiress on board a train is nevertheless, intriguing.
3) NIGHT TRAIN TO MUNICH Starring Rex Harrison and Margaret Lockwood in a film directed by Carol Reed. The title says it all. A terrific Brits against the Nazis spy film. Rex Harrison is young and surprisingly sexy.
4) MINISTRY OF FEAR (1944) Several key scenes in the beginning of this super Ray Milland noir-ish spy thriller take place on a train. One of my favorite films. Review here.

5) THE 39 STEPS(1935) Starring Robert Donat and based on a book by John Buchan (1915). Parts of this superb spy film directed by Alfred Hitchcock take place on a British train as John Hannay (Robert Donat) tries to escape the cordon closing in around him.

7) THE LADY VANISHES (1938) Starring Michael Redgrave and Margaret Lockwood. An early spy thriller from Alfred Hitchcock in which an enigmatic old lady (played by Dame May Whitty) disappears from aboard a train. Next to 39 STEPS, my favorite Hitchcock.

8) UNION STATION (1950) Starring William Holden, Barry Fitzgerald and Nancy Olson. Tense action on board a train, also in and around the famous train station as authorities search for a kidnapped blind girl. Features Lyle Bettger as an odious bad guy - a role he specialized in. Directed by Rudolph Mate.
9) NORTH BY NORTHWEST (1959) Starring Cary Grant and Eva Marie Saint in a film directed by Alfred Hitchcock who is obviously fond of trains. An innocent man on the run, not sure who from, not sure why. Action in more ways than one aboard a train.
10) THE HARVEY GIRLS (1946) Starring Judy Garland, Angela Lansbury and John Hodiak in a musical directed by George Sidney. One of my very favorite Judy Garland films almost done in by Ray Bolger's interminable dance routines. Lansbury plays a 'bad' girl with heart and Garland plays one of the 'Harvey' girls heading west by train - goody girl waitresses hired to work the new Harvey restaurants up and down the line. Features the great number, "Atchison, Topeka and the Santa Fe."
11) TERROR BY NIGHT (1946) Starring Basil Rathbone and Nigel Bruce as Holmes and Watson in a weak story having not much to do with Conan Doyle. But since the action takes place on a train headed to Scotland, there are still elements of interest in the proceedings. Alan Mowbray is properly slimy as Colonel Sebastian Moran. Directed as usual by Ray William Neil. 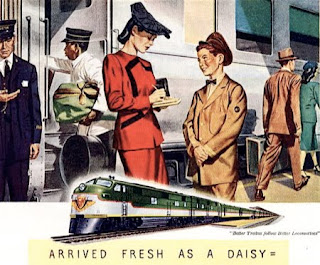