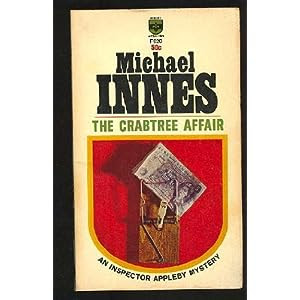 I was actually reading two other books last week (both non-fiction which usually takes me a little longer), but picked up this Michael Innes to read during lunch and never put it down (The book, not the lunch.). I've been bingeing on Innes for awhile as I've discovered (literally) his books: found a bunch of Innes titles in my bookcase I didn't even know I had - twice. Go figure. Maybe I'm being haunted by the ghost of Innes. HA! (Does anyone know if he ever visited New Jersey?)
THE CRABTREE AFFAIR is a nice quiet village murder, the sort of book that's perfect for an afternoon's jaunt into the English countryside where, obviously, there are 'more things in heaven and earth than are dreamt of in our philosophies'.
Seth Crabtree is an old family retainer - well, actually 'an outside man' as opposed to an 'indoor' servant (this is made a big deal of in the book - servant hierarchy being some sort of 'written in stone' type thing) who, after many years working in America (Spokane, Washington) has come back home to England (to the tiny villages of Upper and Lower Scroop), where he'd once been an odd sort of confidant to the late mistress of Scroop House.
Retired Scotland Yard grandee Sir John Appleby and his wife Judith are staying with her uncle, Colonel Raven, over at nearby Pryde Park. On the particular afternoon the book opens, they are on a walking tour and find themselves down by the old canal which bisects the Villages of Upper and Lower. Judith is eager to investigate the old abandoned waterway and the nearby grand house, Scroop, Appleby is reluctant.
Stopping at a pub for refreshment, Appleby and his wife run into Seth Crabtree - sitting at an outside table whittling a small wooden boat - and they strike up a conversation. Judith Appleby is quite taken with the rustic Thomas Hardy-like character and seems willing to be charmed, but Appleby, ever the policeman, is a bit suspicious of Crabtree's demeanor. There was just something 'off' about the whole experience, he muses once they resume their walk.
Within half an hour, Appleby and Judith find Crabtree's body floating face down in the old canal and Appleby's highly astute suspicions seem prescient.
There aren't that many people who could have committed the murder, so the story takes on a kind of 'intimate' tone as Appleby is asked by the local constabulary to take a hand in the investigation. Judith Appleby, at one point, even suspects her 'crazy' uncle whom she says, affectionately, is capable of just about anything.
Seth Crabtree had worked at Scroop House before being 'shipped off' to America (perhaps in disgrace) fifteen years previously or gone abroad on his own for reasons not at all clear. But his sudden return is assumed, by Appleby, to have been the cause of his death. This was not the work of some itinerant tramp he deduces almost immediately.
The list of suspects is not long: Colonel Raven, Judith's eccentric uncle. Mr. and Mrs. Bertram Coulson, the enigmatic and very ill-at-ease new owners of Scroop House. Their gloomy butler Hollywood. (Well, I can't help it, that's the character's name.) Dr. West, the local M.D. whose behavior is oddly suspicious, to say the least. David Channing-Kennedy, the too-hearty publican. Daphne and Peter Binns, a brother-sister combo with prickly attitudes and secrets to hide. And finally, Alfred Binns, former occupant of Scroop House, the mostly missing and rather nervous, father of Daphne and Peter.
The final denouement, revealed in the grand tradition of Golden Age mysteries (though this book was published in 1974) - everyone in the room as the detective names the culprit - is surprising and satisfying as mysteries of this type need to be. It is also slightly daring in that author Innes gives in to the lure of a certain type of cliche. Lovely work.
A perfect book with which to relax for a few hours at this busy time of year.
Posted by Yvette at 10:05 AM