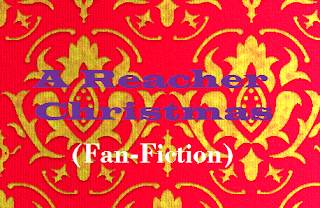 Every year around this time, a few of us bolder 'Reacher Creatures' post our Annual Jack Reacher Christmas Stories (Fan-Fiction) over at Lee Child's Forum. This year, they have a new Forum apparatus which I can't seem to get the hang of - my story just won't make it through the mysterious ether from my file to Lee's forum. So I'm posting my story here and linking to the Forum so that everyone over there can come over here and take a look. Of course, if you're not familiar with Lee Child's Jack Reacher character and his amazing books, this story probably won't mean much to you. Except that I hope it will pique your interest in Jack Reacher and cause you to run right out and get your hands on one of the best series of books by one of the best - if not THE best - thriller writers in the business: Lee Child. (We thank his forbearance in putting up with our stories every year. I liken us to a bunch of little pugs yapping playfully at a big and powerful and awfully tolerant English Bulldog.)