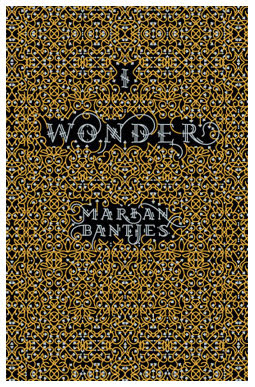 You know how there are fast reads and slow reads? Well, this appears to be something meant to be read and enjoyed s l o w l y - the better to appreciate it's beautiful design mysteries.

I'm just now reading about Marion Bantje's new book, I WONDER in an email from VSL (The Observer's Very Short List). It sounds absolutely fascinating. (Just what I need right now ANOTHER book to get interested in - yes, that's the way it goes around here - too many books is NEVER enough.)

A quote from the VSL email about Bantje's book: It's a deeply personal, absurdly ornate set of illustrated essays and observations on typography and graphic design.
Marion Bantje is a designer and typographic illustrator who lives and works on a small island off the coast of British Columbia. She is fascinated by Middle Eastern mosaics, Pop art, Roman architecture, medieval heraldry, Jewish mysticism and a million other styles, symbologies, and art forms in between. Here is a link to Bantje's website. See more of the book here on Flickr.

Certainly this will go on my Acquisition List for the incoming New Year.