Monday Review: THE MISCHIEF OF THE MISTLETOE by Lauren Willig 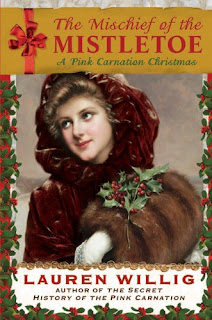 Here's my problem: as much as I love this series of books by Lauren Willig, I can never seem to remember from one book to the other, who is who, what is what and what happened when. I plead the vagaries of old lady memory. Gak! It happens sometimes, with certain series. So, here's my solution: I'll just reread the books at some point. (Something I don't mind doing at all, needless to say.) I do remember enough to know that while I'm reading these books I am loving them. The last one THE BETRAYAL OF THE BLOOD-LILY is my favorite, so far. (At least that I can remember.) One thing I can remember though, is that these books all have the most marvelous, beautifully designed covers.
All this is my roundabout way of saying that my review of the latest book will have little in it about the previous books even though the main male and female characters have appeared previously - he more than she (from untrustworthy memory). I know, I know, MAKE NOTES YVETTE! I forget.
Okay on to today's book: THE MISCHIEF OF THE MISTLETOE, A Pink Carnation Christmas, by Lauren Willig. The term 'Pink Carnation' refers to the clever Scarlet Pimpernel-like English savior of noble Frenchmen and women who, according to this series of books, operated during Le Terror following the French Revolution. There are all kinds of not-so-secret legions, mostly with flowers as code-names who go about intriguing the heck out of 19th century history in these books, and that's part of the fun author Lauren Willig has created.
Arabella Dempsey, our heroine, is an impoverished young English-woman forced by circumstances to take a job teaching at Miss Climpson's Select Seminary for Young Ladies. Though her friend Jane Austen (yes, the Jane Austen - is there another?) advises Arabella against teaching, Arabella is adamant: she cannot continue to live with an aging aunt who has just married a man half her age - moreover a man in whom young Arabella had thought herself in love - so, as she declares at the very beginning of the book: "I am for teaching." The dye is cast.
"At least in a school," she [Arabella] said, as much to convince herself as her companion, "I should feel that I was doing something, something for the good both of my family and the young ladies in my charge. All those shining young faces, eager to learn..."
Jane cast her a sidelong glance. "It is painfully apparent that you never attended a young ladies' academy."
Of course, Jane is correct.
There's lots going on at Miss Climpson's Seminary and very little of it has to do with book-learning. From the very beginning it is obvious that some nefarious spy is lurking either within the confines of the school or as near as makes no difference. When Arabella discovers a plum pudding (it is the Christmas season, after all) whose wrapping appears to contain some sort of spy lingo, the chase (and the fun) is on.
Enter our endearing hero, Mr. Reginald Fitzhugh aka Turnip (as he's known to his close friends), a wealthy dilettante and occasional spy, with a flamboyant taste in clothing and a propensity for tripping over the obvious. Since his young sister Sally attends Miss Climpson's it is not at all odd that Turnip should turn up at the school and bump (literally) into Arabella and the infamous pudding.
From thereon it's a whirlwind Christmas fluff of a book with just enough plot points to keep the reader guessing, smiling and wishfully thinking we could all use a bit of Turnip in our lives.
Vegetables are good for you, don't you know.
This would make a great Christmas present for anyone who loves light-hearted historical mysteries, even if they haven't read any of the other Pink Carnation books. But I'm sure once you've read this, you'll want to go back and check out the rest of the series. Please go to Lauren Willig's excellent website to see the other titles and read more about her books. (And check out the great covers.)
Posted by Yvette at 1:30 PM