A Day That Will Live in Infamy: 69 years ago today, the Japanese attack at Pearl Harbor drew us officially into WWII. Most everything that can be said about this tragic day has already been said, but I thought I'd mention it, late in the day though it is. (I was out most of the day with my daughter doing a bit of Christmas shopping.)
I'd planned on beginning a new series of posts this week titled: A Favorite Film. I already post about My Favorite Reads and A Favorite Painting, so the Film topic will make for a very nice trifecta.
Anyway, since today is the grim anniversary of the attack on Pearl Harbor (read more about it here) I thought I'd begin my new series with the 1970 film: Tora! Tora! Tora!
A slight explanation first: Since I love old films especially, I'd like to make these posts into a once a week series if I can. I'd like to talk about my love for a certain film (whatever it may be), the 'whys and wherefores' of that love, and bolster it with lots of opinionated talk. Since I'm not a film expert - just a fan -I won't delve too much into technical aspects or historical movie minutia. This will just be general film talk about movies I love. Hopefully you will join in this with me and post your favorites as well and we can spend some time 'tawking' movies back and forth.
Tora! Tora! Tora! is not a 'great' film in the way we often think of great films. It is not brilliantly acted nor is it especially brilliantly photographed or directed. But, and this is a BIG BUT, the storyline is set up so we can view the attack from the point of view of the Japanese airmen and officers as well as the Americans - the screenplay is so well-worked that the film appears at times to be a dramatic documentary about the series of blunders which allowed the Japanese to fly undaunted into Pearl Harbor without a single American effort to stop them, until too late. In fact: some of the blunders and the general ineptness make you gasp with dumbstruck horror. That adds to the tension as the film goes along. I mean, you're sitting there shaking your head and thinking, oh no. And yet you know that what must be must be. 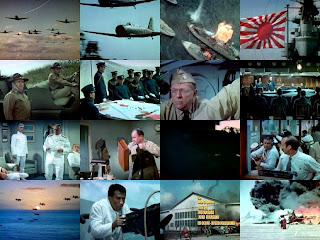 The cast is not filled with big names, mostly B-movie actors doing their competent best. The most famous names I'd say are Jason Robards and Joseph Cotton. The actors involved receive little screen time, they get just enough to push the fast-paced narrative forward in the most effective way possible. See more about the cast here. See the stirring trailer here.

The hours before the attack and then the attack itself take precedent. There are no half-baked love stories or cute sideline interactions featuring cute actors and actresses, the story is relentlessly focused on the coming events. THAT'S what I love most about the film. We see the Japanese planning and then carrying out their plans. We watch them do their work then celebrate over their success. We see the blind pretense in Hawaii, just before the attack, that all is well and things are as they should be. We see a 'sleeping giant' about to be awakened. We note that in the end the Japanese become aware of this as well, despite their initial 'success'. 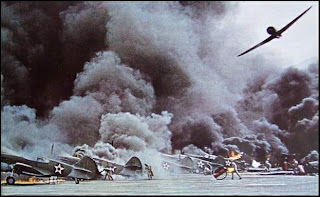 The suspense builds in Tora! Tora! Tora! because WE know what is coming (a build-up, by the way, that is handled very well by the director in charge of the American sequences, Richard Fleischer), but the people at their jobs, the Naval officers, sailors, pilots, diplomats, politicians, the general population on that fateful morning think it's just another sunny day in the neighborhood. (We also get a few scenes taking place in Washington D.C. as telegrams are flashed back and forth and everyone appears to wait to be told what to do.)
The Japanese actors speak in Japanese with English subtitles which adds immensely to the authenticity of their sequences directed by Kinji Fukasaku and Toshio Masuda. The editing splits nicely between the American and Japanese sides in a way that heightens the tension and suspense.
I've watched this film several times over the years and each time it works its earnest spell on me. I still sit there transfixed. I still get tense. I still feel the outrage. I still marvel at the blunders and blindness. I still thrill to the flying sequences and still feel the anger as the bombs find their targets.
Just a terrific, enthralling film. The best one, in my view, to show that day the way it probably was.
Please go here for some very interesting trivia about the film.
So, have any of you ever seen this film? If so, what did you think of it? Do you remember it in the same way I do? Do you have another favorite Pearl Harbor film? Or any favorite film about WWII? There are many, I know.
Posted by Yvette at 6:58 PM