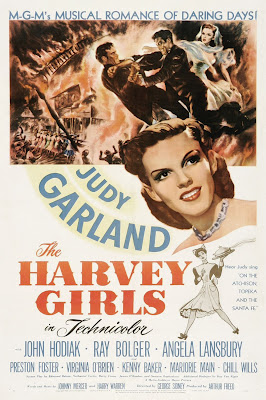 The dreadful poster. Honestly were they TRYING to do the movie in?

Tuesday is Overlooked (or Forgotten) Films Day, a weekly meme hosted by Todd Mason over at his blog, SWEET FREEDOM. Don't forget to check in and see what other overlooked films over bloggers are talking about today.

THE HARVEY GIRLS is a 1946 wild west extravaganza directed by George Sidney, produced by Arthur Freed and featuring songs by Harry Warren and Johnny Mercer.

It is my second favorite Judy Garland movie (after THE PIRATE) and one which I don't think is remembered or talked about much these days and that's too bad. It's a terrific film which, by the way, also features Cyd Charisse in a minor part, her first speaking role, before she hoofed it with Fred Astaire or Gene Kelly and became the dazzling Cyd of our technicolor dreams. 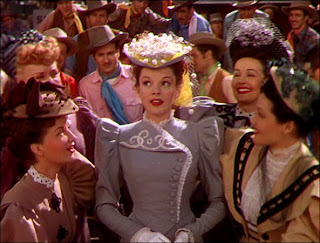 Judy Garland stars as Susan Bradley, an impressionable and very naive young woman on her way west by train, as a mail order bride. On board the Atchison, Topeka and Santa Fe she meets a bunch of other equally young and naive young women heading west to work as Harvey Girls. It's all fun and nonsense as they become acquainted and share their lunch with Susan who, it turns out, is broke and is looking at their yummy sandwiches with longing.

Judy plays this just right. She is simply adorable in these early scenes - you're on her side immediately. 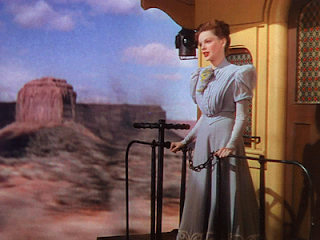 The Harvey House Restaurant chain actually did exist once upon a time when train travel was THE thing. At specified station stops along the line the train would be met by a clanging gong which heralded the Harvey Girls' presence - an honest restaurant where travelers could stop and be refreshed by good food served by ultra respectable young waitresses in starched black and white uniforms. 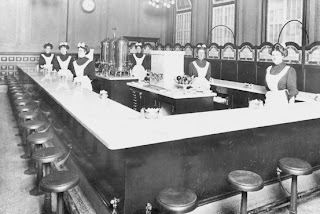 Most of these girls were also looking for husbands, at least according to the film, and this was as good a way as any to meet eligible men out in the wild west. Read about the The Harvey House restaurant and the Harvey Girls here. 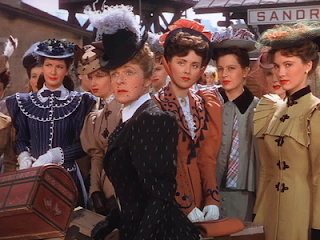 At any rate, once the train with the mail order bride and the group of potential Harveys (watched over by a stern dragon lady who will brook no hanky-panky) arrives at their western stop, Susan (Judy Garland) and the gals and the cowboys and practically the whole town jump into a rousing, show-stopping musical number, The Atchison, Topeka and the Santa Fe. Watch it here. I think this is the only time in movie musical history (that I can remember anyway) in which a train actually takes part in a song and dance routine.

After this fabulous and spirited beginning, Susan and the Harvey girls part ways as they go off to their boarding house and Susan goes off to meet her husband to be. 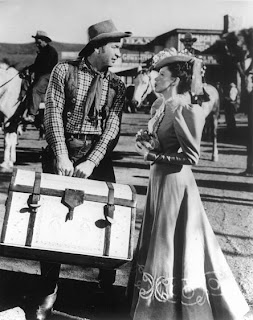 However, he turns out to be a totally inappropriate middle-aged bashful cowboy played by Chill Wills and he and Susan are both relieved when they mutually call the whole thing off.

The unmarried Susan goes off to the restaurant to look for a job as a Harvey Girl. (She is very fetching in uniform.) 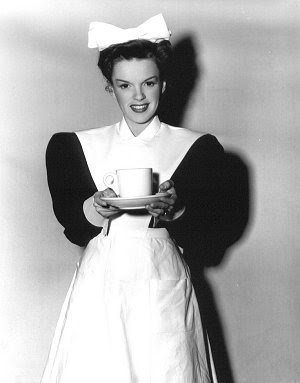 There's always a fly in the ointment however, and the fly in this particular western ointment is the rowdy saloon directly across the way from The Harvey House Restaurant. That's where Ned Trent (John Hodiak), the brooding loner of an owner and his rough henchmen (Preston Foster, Jack Lambert, Stephen McNally and the like) hang out.

Of course, where there's a saloon, there's always a beautiful saloon singer who just happens to be the girl friend of the owner. This time out she's called Em, and she's played by the extraordinarily alluring Angela Lansbury. 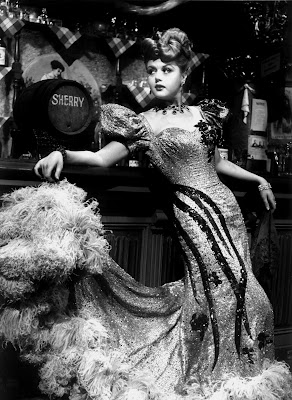 The main conflict in the film is this simplified idea of good girls vs. bad girls and the civilizing influence that good girls supposedly had on the wild, wild west. See, here's the shpiel: after the good girls arrive in town, then comes marriage, family life, churches, civilization!

Say goodbye to the fun of shooting up the town on Saturday nights and drinking, gambling, and carousing with easy women. Say goodbye, in other words, to the lucrative business that Ned Trent and his honchos have worked hard to establish. 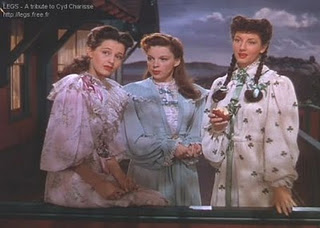 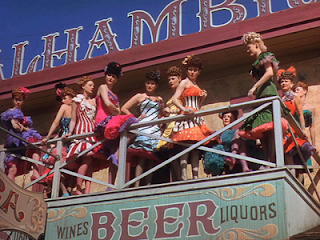 This simple plot device works fairly well as good vs. evil is played out amid songs and dance numbers and the actual falling in love of Susan, the spunky Harvey girl and Ned, the hard-edged owner of the saloon. One would never suspect that no-account cowboys, rugged men of the west, would be afraid of a bunch of uniformed virgins setting up a restaurant, but that's the way it's played out here. And for whatever reason, you buy into it. It's cute. 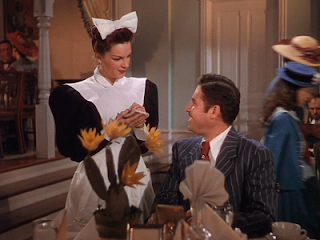 But Ned Trent's men won't go down without a fight, there's too much money to be made in the gambling, cheap liquor and easy women biz. 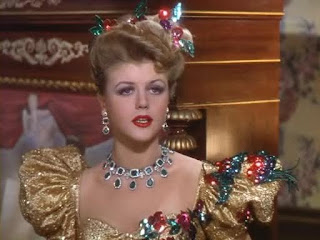 Em, despite the glitter and perfect make-up, is world weary and wise. She's no fool, she sees the sparks flying between Ned and Susan and she doesn't want to lose him to some little nobody, goody-two-shoes in a uniform, for goodness' sake!

One day, Susan stumbles on Ned's 'thinking' place up in the hills. It's where he likes to go to brood and be alone. She is sympathetic, especially once she finds out he reads books! He is intrigued with her charming naivete. 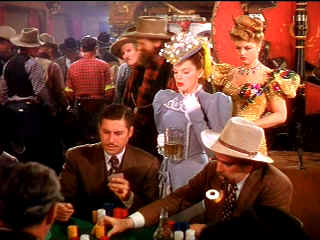 Judy confronts Ned in his lair.

Eventually, the bad guys (in the guise of the cunning Preston Foster) do their worst and do send some Harvey girls scattering for the safety of back home, but then it's all over but the last train out of town for the forces of gambling, cheap liquor and easy women. Goodness wins out. 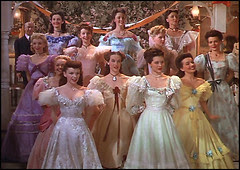 Especially once the cowboys get a load of the 'good girls' out of uniform.

My only quibble (there's always go to be a quibble - right?) with the film is Ray Bolger who is a very definite acquired taste which I never acquired. Except for the part of the Scarecrow in The Wizard of Oz, I was never a big fan of Bolger's work. He has a dance routine in this film which goes on forever and is totally unnecessary. But maybe that's just me.

That's what the fast forward button is for.

If you've never seen THE HARVEY GIRLS, you're in for a treat. Though I can think of several other handsome men whom I'd rather have seen play Ned Trent rather than John Hodiak, I can tolerate him in this. He's fine with Judy. 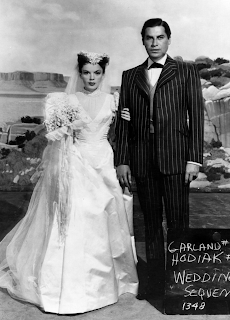 Clark Gable was originally supposed to play Ned Trent. He would have been superb....sigh!

Read more about the film here.
Posted by Yvette at 10:15 AM