Friday is Forgotten Books day around here. This is a weekly meme usually hosted by Patti Abbott at her blog but for today, Todd Mason will be collecting the links at, SWEET FREEDOM.

Don't forget to check in later and see what other forgotten books other bloggers are talking about today. My entry today is TROJAN GOLD by Elizabeth Peters.

The gold of Troy has turned up again. At least that's what someone would have art historian Vicky Bliss believe. She's received a blood stained photo in the mail, a photo of the famed cache of Helen of Troy gold found by archaeologist Heinrich Schleimann in the late 1800's and then rumored lost at the end of WWII.

So of course, off goes Vicky on yet another action packed adventure full of intrigue, confusion and the occasional dead body.

American Vicky Bliss works as a curator at the National Museum in Munich, Germany. She is six feet tall, has blond hair and is stacked, which can often lead to misunderstandings. A bimbo she is not. She'd much rather be short and cuddly like Gerda, her boss's secretary, but life just isn't fair sometimes.

When she isn't curating at the museum and fending off her boss's zealous interest in her non-existent love-life, Vicky is off on some jaunt or other, tracking down some piece of art or other. Where Vicky goes, the very mysterious and devastatingly handsome art thief, John Smythe is sure to turn up and where they go, danger and adventure follow.

Vicky's boss is Herr Doctor Anton Z. Schmidt, the museum's roly-poly director who is a look-alike for Santa Claus. He loves nothing more than dressing up in costume and following Vicky himself. But when you look like Santa it's hard not to be noticed trailing down the street dressed like a peasant woman.

Elizabeth Peters has a wicked sense of humor and it's nowhere more apparent than in this series set in 'contemporary' Europe. Though these books are less well known than Peters' Amelia Peabody series, they are worth looking for, especially if you want a good laugh while dodging bullets, art thieves and other assorted bad guys as you whirl about Europe.

My two favorites are TROJAN GOLD and NIGHT TRAIN TO MEMPHIS. (Memphis, Egypt, that is.)

GOLD should be read first. There are a couple of other books in the series, but these two are the stand-outs, in my view. 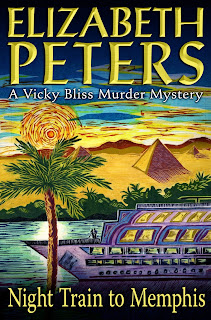