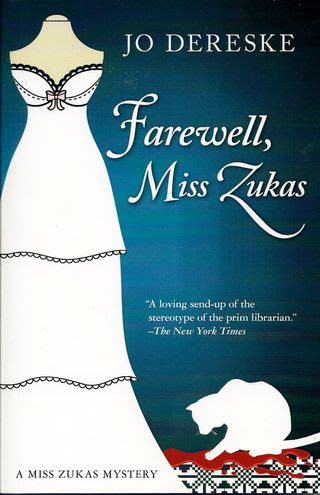 To those of you familiar with Jo Dereske's series featuring Lithuanian/ American librarian Helma Zukas this book comes as a bittersweet surprise. This will be the last of Dereske's books featuring the wonderfully uptight OCD inclined Miss Helma Zukas (short for Wilhelmina). In fact this is the book that rounds things up and gives her fans (me included) the ending we've been wanting for years.

I've been enchanted by Miss Zukas, everyone's dream of an efficient librarian, since the very first book. Though she can be stern and off-putting with her rigid inclination to have everything just so - she has a kind heart and her early loneliness was palpable. Your heart just went out to her.

Plus, at her age, who would have thought back then, that a hunky police detective, recently divorced and fearful of entanglement, would eventually fall for a touchy, reluctant woman, past the first bloom of youth?

Saving the best for last, author Jo Dereske gives us a wedding - Helma has FINALLY said yes! She and Chief of Police, Wayne Gallant, of the Bellehaven, Washington, Police Department are to be married......sigh! (To think how clunkily slow this courtship has commenced, it just made me smile going in to know that the day had finally arrived.) Neither of these two are the sort to make snap judgements or decisions. In fact, if it were up to Helma, the happy event would be a year off.

But first, the usual Miss Zukas complications have to get straightened out.

First of all there's a robbery and death at the senior home where Helma's ancient Aunt Emily and Helma's not-so-ancient mother, Lillian live. Has 90 year old Aunt Em really committed murder? Surely she doesn't have the strength to heave a young robber out a window? Or does she? 'It's the adrenaline,' claims Ruth, Helma's life-long best friend, the razzle dazzle artist (opposite of the OCD Helma in every way) with an eye for tall men.

Then there's the criminal investigation and the fact that some of the stolen items keep getting mailed to Helma at home and at the library. Of course, then, she must take an active interest in who did what at the Senior home. Helma can't help thinking Aunt Em is holding something back.

But the robbery and death are mere stumbling blocks when there's a wedding to be planned. To that end, Helma's mother Lillian is making plans to turn the long-hoped-for-event into a Three Ring Extravaganza - ignoring Helma's more cautious inclinations.

Then in another twist,  Lillian decides she too will have her own happy ending. Enter TNT, the retired Irish gent who lives next door at Helma's apartment complex. He has been Lillian's on again/off again beau for awhile. Now they're permanently on again leaving a very disconcerted Helma to try and tip-toe past his apartment door after her mom has obviously spent the night.

As the investigation continues, Helma is worried that Aunt Em's faulty memory has come in very handy. She's obviously keeping secrets about the dreadful day she got up from a nap and was accosted by a robber who promptly fell (or was he pushed?) out the window. Could there have been a second robber?

In the meantime, Ruth the flamboyant artist, decides to lend a hand with the investigation since she's not painting at the moment having hit another artist's block. (Same as a writer's block.)

In addition, the cop in charge of the investigation, Carter Houston - formally derided by Ruth for his staid, impeccably dull appearance and Helma-like OCD behavior, turns out to have secrets of his own.

At Carter's doorway, Ruth picked up a framed canvas that sat face-in to the wall and turned it to expose an oil painting. It was a sunset, approximately. At least the colors were sunset colors.

"Who did this?" Ruth held the painting at arm's length, critically eyeing it.

"But' is right," Ruth agreed, gazing around Carter's tidy office. "It's nice, but I wouldn't call it your style." She set the painting down face-out and gave the frame a friendly pat. "I used to be a painter. Painted like the wind. Day and night. But then one day - poof - it was gone. All dried up. No more where that came from. I may as well turn my brushes into toothbrushes." She heaved a dramatic sigh. "Now, I collect cat statues."

When it becomes obvious that clues are there for the taking at the local Lithuanian Club, Helma and Ruth show up asking questions.

Meanwhile, back at Bellehaven Library (surely the busiest library in the country), Helma must also deal with a crowd of dissatisfied local authors who are angrily picketing outside.

Finally, there's a mad dash to the airport to stop a plane from taking off with a possible bad guy on board, then a mad dash to an impromptu wedding.

"I had an interesting conversation with your manager," Wayne said. [Chief of Police talking to Helma]

He nodded, a quizzical look on his face. "He seemed to think your cat is a bad influence on his cat. Boy Cat Zukas is neutered, right?"

"He is. I found Moggy [Walter David's Persian] on my balcony, wet and dirty."

"And Boy Cat Zukas was with her?"

"On the railing. He and Moggy had a relationship once, but certainly they wouldn't remember it."

Wayne grinned and glanced over at Boy Cat Zukas who lay curled up in his basket with one eye open in that disturbing manner he had. "Never underestimate a cat."

I loved this book, but I'm saddened that there will be no more adventures in library etiquette and murder from one of my very favorite fiction characters, Miss Wilhelmina Zukas of Belle Haven, Washington. (I may even miss Boy Cat Zukas.)

To view the complete list of Jo Dereske's Miss Zukas series, please use this link.
Posted by Yvette at 3:43 PM