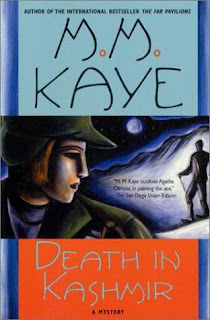 DEATH IN KASHMIR is the first in the wonderful M.M. Kaye's series of 'young woman in danger' books and one of my favorites. I can't remember ever reading this one so it came as a very pleasant surprise to me and not only that, it qualifies as an entry in the VINTAGE READING MYSTERY CHALLENGE hosted by Bev at her blog, MY READER'S BLOCK. (Notice how smoothly I slipped that in.)

Mary Margaret Kaye (1908 - 2004) lived a long and amazing life. She wrote historical novels, mysteries, children's books and non-fiction set in the various countries she and her husband (in the British government service) were posted to.

This year I plan on reading her three volume autobiography which I've been told is quite extraordinary.

DEATH IN KASHMIR is set in colonial India as the rule of the British Raj is coming to an end. Everything in that part of the world is in flux and an incredible plot hatched by nefarious forces behind the scenes is at the heart of the danger our heroine, Sarah Parrish, unexpectedly finds herself in.

Sarah is on a skiing vacation in Gulmarg, a resort in the snowy mountains above the romantically named Vale of Kashmir. It is 1947 and Sarah and a group of other skiers are attending what will probably be the last holiday jaunt of the Ski Club of India.

Beautiful mountain-locked Kashmir was one of India's many semi-independent princely states which, by treaty, were in effect 'protectorates' of the Government of India, ruled over by hereditary Maharajahs, Nawabs, Rajas or Ranas who were 'advised' by a British Resident. And though access to this particular state was not easy, since it was walled in on every side by high mountains, it has been regarded for centuries as an ideal hot-weather retreat from the burning plains - the great Moguls in their day, making the journey on elephants, horses or in palanquins.

The British had followed where the Moguls led, and made it one of their favourite playgrounds.

(Don't worry, there is a handy map enclosed to give you an idea of the depth and breadth of the area.)

While up in the mountains, one of the older women skiers in Sarah's club has been killed in an 'accident'. Shortly thereafter, Janet Rushton, a young friend of the dead woman, confides in Sarah (in a late night whispered meeting in Janet's room) that the death was no accident. She - Rushton - is in the same danger that swept up her friend. At first Sarah doesn't believe the fantastic tale, but the woman is obviously frightened and desperate. Sarah tries to make sense of her story.

The ski group is rather isolated by weather and terrain at the moment, and Janet Rushton needs someone to confide in, instinctively she trusts Sarah. As Janet says, there's no one else to tell and the truth of what she and her friend discovered cannot be allowed to die with her. And who knows, she may survive yet and all this impromptu hugger-mugger may be moot.

What truth? Well, turns out, Janet Rushton is a British spy. One half of an espionage duo headed by her dead colleague. They'd been on the trail of an outrageous rumor which had turned out to be quite true. But their contacts had so far been unable to reach them or relieve them of the info up in the mountains. Janet is desperate to pass on her information to her superiors, she knows she is  likely next on the murderer's list. Hard as it may be to believe, someone in that harmless seeming group of assorted skiers is an enemy agent.

Janet's fear and desperation conveys itself to Sarah. Especially since Sarah knows that someone had been trying to break into Janet's room (that's what had awakened her in the night) AND she spots the footprints in the snow.

Janet must find a way to pass on the important information she and her colleague have stumbled upon. She's recorded the details of the deadly plot and pleads with Sarah -  if worst  should come to worst - to travel down to Janet's houseboat in Peshawar where the message is hidden. But she doesn't tell Sarah what the information actually is (or where on the houseboat it's hidden), of course, since she, Janet, may still pull off the impossible and come out of this whole adventure alive and well.

Well, long story short, Janet is wrong. She is killed just when she thinks she's gone to meet her contact. Sarah doesn't reveal Janet's story to anyone and once back down from the mountains, she plans on traveling to Ceylon and continuing her holiday since really, who can she tell? What can she do? She has no idea who in the British community can be trusted. Besides, it isn't really her business.

Several of the same people who were skiing up in the mountains have now transferred their holiday to Peshawar, along with a new entry in the group, Charles Mallory, a tall, dark and enigmatic man of mystery, the type to cause palpitations in the breast of any young woman.

Mallory catches Sarah's eye, but she is not sure if he be enemy or friend.

The main attraction of DEATH IN KASHMIR is the incredibly romantic and exotic setting. M.M. Kaye's talent as a writer, her gift for making this lost colonial world of the Raj (a world she knew well, having been born in India) come alive is what kept me reading late into the night. She fashions a wonderful tale of espionage and murder in the sort of exotic locale where anything is possible. I couldn't turn the pages fast enough to learn what happens next to Sarah and Charles - oh yes, Sarah changes her mind and cancels the Ceylon part of her trip.

With death and suspicion all around her, can Sarah ferret out the truth and stay alive long enough to decide if Charles is the man for her?

I am a big fan of M.M. Kaye (if you haven't read THE FAR PAVILLIONS, drop everything and do so immediately) and I must say I loved DEATH IN KASHMIR. I can hardly believe it was the first of M.M. Kaye's wonderful stories.

To see the complete list of M.M. Kaye's books, please use this link.

Luckily, there are plenty of copies of Kaye's books still available.
Posted by Yvette at 12:29 PM