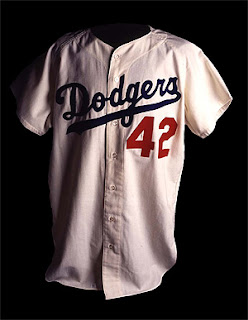 Today is the birth date of the man who courageously broke the color line in modern day major league baseball. It was 1947 when the Dodgers called up Robinson from the minors (where he'd been the first African American to play in  'whites only' minor league games) and caused a furor of controversy. Many ignorant players threatened not to set foot on any field with a 'colored' man.

Robinson was the butt of jokes, threats, insults from the public and other players. He suffered physical assaults from spikes as well as 'accidental' knock-downs on the field. When the team traveled he was not allowed to eat with the white players, especially in the South of that time. In many towns he wasn't allowed to stay in the same hotels as the other Dodger players, sometimes being forced to sleep on the bus.

He took all this with a gentleman's calm grace and patience to rival Job's. The truth of the matter is that he was an extraordinary human being.

Robinson merely knocked the hell out of the ball and played his heart out on the field, becoming one of the greatest baseball players in the history of the game. He eventually won the respect and admiration of other players and the public. 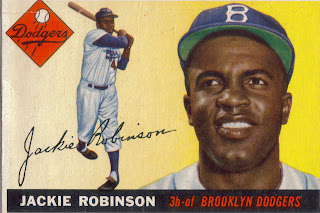 He had been signed to the team by another courageous man, the far-thinking Dodger's club president and general manager, Branch Rickey who'd been scouting the Negro Leagues for possible players and decided to go with Jackie Robinson, keeping the whole thing a secret until the last possible moment. The rest, as they say, is history.

Wonderful poem about Robinson by the poet, Lucille Clifton:

ran against walls
without breaking.
in night games
was not foul
but, brave as a hit
over whitestone fences,
entered the conquering dark.

Thanks to Robin Bates of BETTER LIVING THROUGH BEOWULF, for the tip.

To read about Jackie Robinson's life, please use this link.
Posted by Yvette at 4:30 PM