Friday's Forgotten Books: THE CASE OF THE CONSTANT SUICIDES (1941) by John Dickson Carr 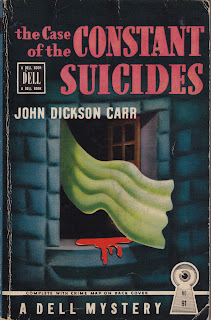 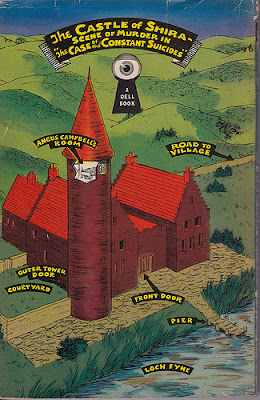 Friday means Forgotten Books, a weekly meme hosted by Patti Abbott at her blog, PATTINASE.  Don't forget to check in to see what other Forgotten Books other bloggers are talking about today.

Since my book was written in 1941, it also qualifies as an entry in Bev's VINTAGE MYSTERY READING CHALLENGE.  As I said last week: two birds with one stone.

In the Highlands of Scotland, near Inveraray, sits the Castle of Shira, the ancestral home of the Campbells - or at least what's left of them. It is a gloomy picturesque pile - the perfect spot for a murder or two. THE CASE OF THE CONSTANT SUICIDES by John Dickson Carr, famed for his locked room expertise, provides a fiendishly fun antidote to the winter blues.

Invited to attend a family counsel after the death of Angus Campbell who tumbled from a tower window and was dashed on the ground below - a likely suicide - are two professors who begin their relationship by bickering over the historical details pertaining to the persona of the Duchess of Cleveland.

The professors are Kathryn Campbell who teaches at a woman's college and Alan Campbell who teaches at a male. Forced to share one compartment because of a name mix-up - the professors have just met for the first time - they are, unfortunately, overheard in the heat of their all night argument by a newspaper reporter in the next compartment. An incident which will have repercussions later in the story.

The London reporter is named Charles Swan. He has been summoned to Shira by Aunt Elspat, an ancient crone who rules the roost. She had been the mistress of the now dead Angus.

Once this troupe of travelers arrive at the castle, they are met by the elderly Colin Campbell, Angus's gregarious, whiskey loving brother as well as the family law agent (Scotlands's term for lawyers) who has come visiting. In the mix that same evening is Walter Chapman, an insurance agent who argues that his company won't pay the premium on a suicide.

So it behooves the family Campbell to prove that Angus was murdered. Angus had one enemy, Alec Forbes, his ex-partner in several preposterous get-rich-quick schemes. Forbes has immediately fallen under suspicion.

When the cranky Aunt Elspat joins the company downstairs she furiously denies having sent for Swan the reporter and has him thrown out. This will not be the first indignity suffered by the hapless, though intrepid Swan. Aunt Elspat is not to be trifled with.

Later, Doctor Gideon Fell joins the group, summoned by Duncan the law agent to try and decide if Angus's death was suicide or murder. The matter is further complicated by the near death of Colin Campbell who falls from the same window as Angus after insisting he will spend the night up in the turret no matter that a ghost with no face was seen at the open window.

Are you with me so far?

The scene of the crime is thus: Angus Campbell fell to his death from a window in his locked bedroom. A locked dog carrier minus a dog is found under his bed. The dog carrier has metal grating at one end to allow for any occupant's breathing. What did Angus OR the killer carry into the room inside a dog carrier?

The family Campbell is in dire straits, financially. If Angus was murdered, then the insurance - a tidy sum - will be enough to keep Colin and Elspat for the rest of their days. But if Angus died by suicide - the family gets zip.

When Colin almost meets the same end as his brother, it most definitely is not an attempted suicide. But who could possibly want to kill Colin?

Join the confusion as master of the locked room mystery, John Dickson Carr pulls the wool over our eyes yet again. Though this time I did catch on to one of the tricks before Doctor Fell. Ta-DA!

But for the rest of the crime solving duties I defer to the rotund lexicographer whose genius cannot be denied. He dashes about, pipe smoking, wild hair flopping and loud voice exclaiming and before you know it, all is made right again.

Even if now and again Fell manages to cheat the law, he catches the culprit, saves the day after yet another suicide(?) occurs and reveals the nasty convoluted truth, thus assuring that Colin and Elspat will spend the rest of their remaining days in comfort.

What more could you want?

Oh, there's also a satisfactory love story with a happy ending.
Posted by Yvette at 10:47 AM