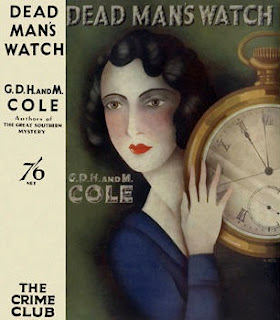 Well it's a brand new year and this my first entry in the 2012 Vintage Mysteries Reading Challenge hosted by the wonderful Bev at her blog, MY READER'S BLOCK. She'll be keeping tabs on our reading lists as the year goes on as we read and report. I've earmarked three categories in this year's Challenge, see my post on Bev's Challenge here.

*******************
I must thank John at PRETTY SINISTER BOOKS for sending me my very own adorable little copy of G.D.H. and Margaret Cole's sinister English countryside mystery, DEAD MAN'S WATCH. It's a particularly snug and handy version (4 1/4 " X 6 1/4"), published by Collins' Clear Type Press of London and Glasgow in 1931. (Not the version shown in the above cover pix.)

Oh, if only all books could be published in this handy, comfortable size. Thank you, John. You're a peach.

This version of DEAD MAN'S WATCH is a clear reminder, to me at least, of the reason why e-books simply cannot compare to the 'real' thing. Once I held this oh-so-attractive little book in my hands I simply couldn't imagine something as unengaged, charmless and static as an e-book ever having the same reading 'oomph'. It's hard to cozy up to something that isn't 'real'.

Frankly, the charm of this copy added to the whole enjoyable reading experience.


******************
DEAD MAN'S WATCH is a fast moving, traditional mystery which is part whodunit and part how-dunit. It's a clever tale of confused identities and murder which begins when a body is found drowned and the police as well as an amateur sleuth, Sir Charles Wylie, a local baronet, suspect murder because of one significant clue: the victim's beard was shaved after death.

The meddling baronet is given short shrift by the local police so he decides to investigate the crime himself with the help of Miss Dolly Daniells, a spunky gal and doting friend of Ronald Bittaford, the rather hysterical young man who's found the body and keeps insisting it's his uncle Percy. Unfortunately for Ronald, everyone else insists that Percy has been dead and buried for six months.

Midway through the book there are several delightful letters exchanged between Dolly and Wylie as they write back and forth trying to make heads or tails of the mystery. Dolly has been sent to keep a comforting eye on Ronald as he, poor dispirited soul, has been squirreled away at the domicile of the dead man's widow.

It's a pretty puzzle for the impetuous Wylie and eventually, the police, especially in the stalwart person of Inspector Wilson of Scotland Yard, when they come around to the idea that things are not what they previously seemed.

I figured out what was actually going on in DEAD MAN'S WATCH about halfway in, but that didn't stop me enjoying this fast-paced old school mystery.

Inspector Wilson, by the way, is a Coles recurring character. I would hope that Dolly Daniells and Charles Wylie would be also, but I have no idea.

I'm not familiar with the authors (I'd never heard of them until John introduced me his blog post), but now that I've read DEAD MAN'S WATCH, I'll be keeping an eye out for more books written by this talented husband and wife team.

Note: According to Wikipedia, the Coles wrote tons of mysteries and the big mystery to me, is why I'd never heard of them before.  Read more about the Coles here.
Posted by Yvette at 10:00 AM