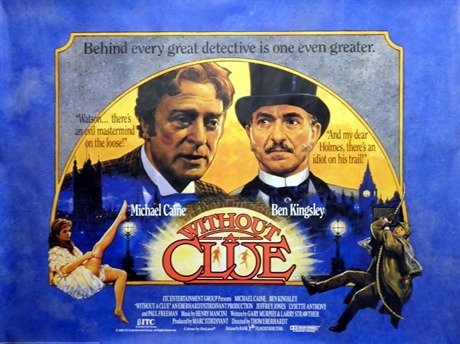 Tuesday is Overlooked (or Forgotten) Film day - a weekly meme hosted by Todd Mason at his blog, SWEET FREEDOM. Don't forget to visit and see what other overlooked films other bloggers are talking about today.

I've talked about WITHOUT A CLUE, a 1988 film directed by Thom Eberhardt, before, when I first began blogging, but I think it's time to talk about it again. Not enough people have heard of this hilarious Holmes and Watson parody starring two British actors better known for their dramatic work.

It's Victorian England at its wacky, murderous best. Ben Kingsley plays a brilliant and very pompous  Dr. John Watson who in this version of Arthur Conan Doyle's tales, is the real brains behind the classic detecting duo. Sherlock Holmes is just an invention of his fertile imagination. But the stories Watson writes are so popular he's forced to produce a real life Holmes.

Readers (as well as the cops) think that Holmes is the actual genius solving the cases Watson chronicles. 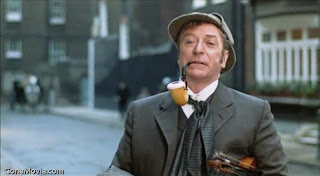 To that end, he hires a drunken, womanizing sot of an actor - Michael Caine at his laughably smarmy best, to play Sherlock Holmes. Caine easily steals the movie with his outrageous portrayal of a nitwit. When I first saw this movie sitting in a nearly empty theater, I laughed until I cried. It was embarrassing.

Unfortunately no one else in the theater found the film as amusing, so I assumed they were grumpy Holmes purists or just a bunch of folks without any redeeming qualities whatsoever. 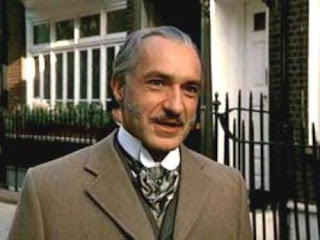 When an indignant Watson fires Holmes for being a total incompetent, not to mention a letch and a lush, Watson then goes to his publisher Conan Doyle and tries to make a different deal for himself - a series of tales based on a crime solving doctor.The publisher scoffs at the idea.

The public wants Holmes. Period. The good doctor is hoisted on his own petard.

The government wants Holmes too. They come calling on a case of national importance (a missing Bank of England 5 pound notes printing press and an engraver), they won't hear of anyone but Holmes taking the case. 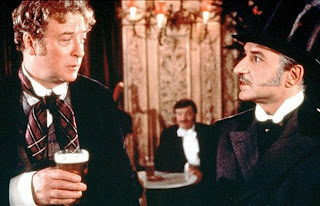 So Watson is forced to rehire Holmes whom he finds drunk and disorderly at a local pub. 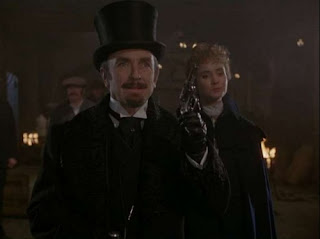 On the trail of the murderous and cunning Professor James Moriarity (an overacting Paul Freeman), Watson drags Holmes along to the Lake District of England to investigate the finding of a dead body related to the Bank of England case. They are met at the train station by half the town and a marching band. 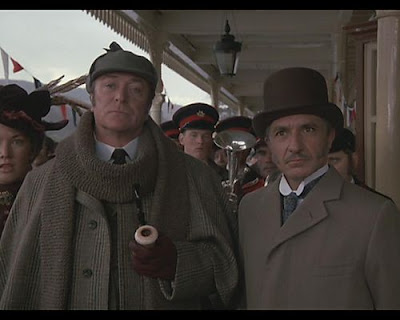 The thing is, wherever they go, Holmes is the detecting rock star. Watson gets shoved into the background literally and figuratively. But it's always Watson deducing and hunting for clues as Holmes basks in the limelight with the cheesiest grin this side of Wisconsin.

Along for the ride are Inspector Lestrade (Jeffrey Jones) who is no smarter than Holmes and worse yet, can't quite figure out that's it's Watson who is the brains of the whole enterprise. 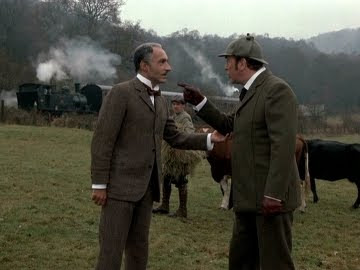 The humor in the film comes from watching Kingsley and Caine do their best to upstage each other while in the midst of attempting to solve a heinous crime. Michael Caine is just superb. Is there nothing this man can't do? He is totally unafraid to look or act the fool. Kingsley in a thankless role, is almost as good though he isn't as self deprecating as Michael Caine. His portrayal is a bit too tightly mannered to be truly funny, but he is wonderful nonetheless.

WITHOUT A CLUE is not all mystery and wackiness and fun (not that there's anything wrong with that), in some strange way it's also a film about friendship and tolerance. At the heart of Michael Caine's lechery and lunacy is a touching glimmer of loneliness. In the end, these two very strange men finally work out a way to solve the case and save their odd partnership.

Unfortunately, the second half of the film doesn't play as well as the first because, foolishly, it all takes a serious turn - things start blowing up and Paul Freeman chews up the scenery with his Snidely Whiplash portrayal of Moriarity. 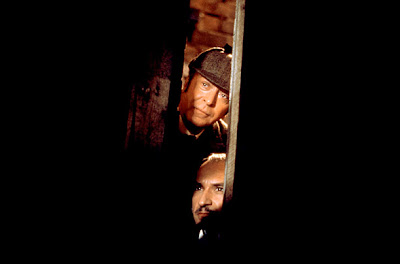 Thankfully though, there's  Caine and Kingsley to save the day and the movie.

If you have affection for Holmes and Watson and you also enjoy British physical humor, slapstick and satire, plus you enjoy laughing out loud, then this is the movie for you.

Look, I'm a Holmes purist of the old school. Except for the books by Laurie R. King, I'm not overly fond of Holmes pastiches and heaven forbid someone make fun of my favorite fiction character in all literature.

WITHOUT A CLUE is pastiche and funny faces and Holmes as fool and yet, I love it.

You can never overestimate the power of an actor's charm.
Posted by Yvette at 9:41 AM