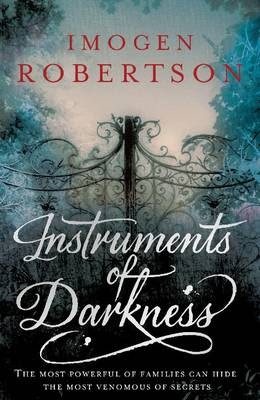 The first FABULOUS book of my reading year is here: INSTRUMENTS OF DARKNESS (2009) the debut novel of British writer, Imogen Robertson.

I've read two amazingly good books so far this year (both happen to be historical mysteries) and I'll be talking about the second in a few days, but today belongs to this incredible novel which had me enthralled almost from the very first page.

I couldn't believe, as I was reading,  that this was a debut. The writing is so self-assured, vivid, historically true (at least to my modern day eyes and ears), and in sections quite lyrically beautiful. The author's sense of scene - 18th century Sussex and London - is superb.

But there are dreadful crimes committed here and Robertson doesn't flinch when the need arises to describe the foul work.  Under the spell of Robertson's writing, I was caught up in the 18th century world of Harriet Westerman, a married gentle-woman left at home in charge of children and Sussex country manor while her husband is off at sea for months at a time.

Harriet is strong, disciplined, intelligent and living within the strictures of an age which wasn't very kind to women.  She is, unfortunately, burdened with a fine mind and the need to use that mind other than on household pursuits and gossip.

When a man is found dead on her husband's land - his throat slashed - Harriet decides to find out the who and the what of it. Especially when a gold ring bearing the crest of the local earl's estate, Thornleigh Hall, is found on the body.

Harriet engages the help of a neighbor, the reclusive and often sullen Gabriel Crowther, an anatomist whom the local townsfolk look upon with unease.

What great pair these two make. There is no romantic entanglement, just a friendship that develops as the first horrible crime leads to a second and Harriet and Gabriel must work together to resolve a deadly series of events.

Harriet has felt the evil emanating from Thornleigh Hall, the country home of a once great but now perishing family headed by a dissipated earl whose beautiful low-life wife and tormented second son - a veteran of the American war for independence - wait for his imminent death.

It is an inescapable truth that the this family's vile secrets are at the heart of the mystery. Author Robertson makes no secret of this. Since the story is really not a 'whodunit' but a 'how and why-dunit', the reader pretty much knows who the villains are about half way through the book. Though there still manages to be a surprise or two in the final denouement.

But knowing doesn't lessen the allure or the intrigue. Terrific writing will win the day every time.

The story switches  viewpoints as we move from the countryside of Sussex to the jam packed and tumultuous streets of London during the Gordon anti-Catholic riots. We learn about the earl's  first born son, his heir, a widower who was cut off from the family name and fortune when he chose to marry for love. What happens to him and his little family when evil from Thornleigh Hall reaches out as far as London, makes for a story which almost instantly captures the imagination.

There  is also a step back into history as we learn about the war time experience of the earl's second son and how this experience impacts the current murderous situation.

The three strands of the story are carefully and expertly woven together by the author until in the end they all come together at breakneck speed. I could not read the last few pages of this atmospheric thriller fast enough.

I've said this before and I'll say it again, I am NOT a fan of varying viewpoints, but when the writing is this good, the talent this great, I forgive all - author Robertson's gift for story-telling carries the day.

I can't wait to read the next two books in the series, THE ANATOMY OF MURDER and ISLAND OF BONES.

P.S. I wish Imogen Robertson had written DEATH COMES TO PEMBERLEY instead of P.D. James. I'm sure she could have made something intriguing and true out of it.
Posted by Yvette at 12:51 PM