The Museum of Lost Wonder - Revisited 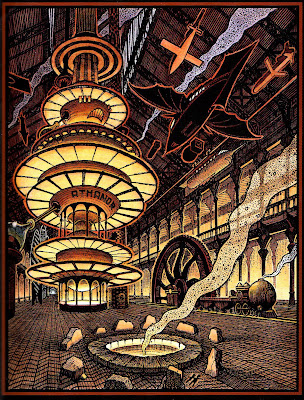 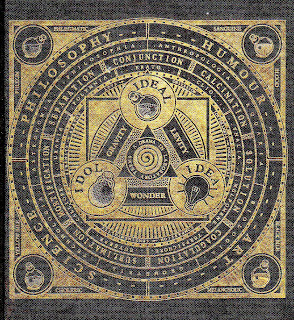 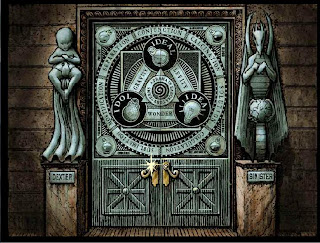 Museum's main doors.
I've blogged about this extraordinary website before and now I'm posting about it again. Why not? Something this special deserves to be looked at and talked about more than once.

The Museum of Lost Wonder is currently only online and in book form.
The 'museum' is manned by Jeff Hoke, an extraordinary artist and visionary who also happens to be an exhibit designer for the Monterey Bay Aquarium (this has to be one of the top dream jobs in the whole world) and an enthusiastic devotee of graphic novels. You'll see that influence in the 'museum'.

I'm not quite sure what the MUSEUM OF LOST WONDER actually is, but the website purports to be a portal into a 'museum' filled with different Halls which appear to be wondrous scientific dreamscapes, beautifully designed and rendered. Each room has its own musical background as well as small sound and movement effects, birds and critters and whatnot. There is an interactive tour which is easy enough to maneuver.
Jeff Hoke's mission as I understand it, is to bring back the true wonder of science - that wonder we felt as children. The sort of wonder we usually lose once we become adults. His creation looks and feels like an emotional time machine designed by Jules Verne's Captain Nemo.

The 'museum' itself is certainly the result of a powerful imagination and the work of a brilliant craftsman. There are elegant Steam Punk elements in Jeff's designs as well as Baroque and Classical and other assorted influences, with touches of Ancient Egyptian mixed in for good measure.

My favorite Halls are: CALCINATIO followed by SOLUTIO and then, COAGULATIO. Though in truth, I am fascinated by them all.

You can take an interactive tour  of the 'museum' at Jeff's website here.

Here's a post I found on Illust Intro which talks about Jeff Hoke's book and his creative vision and explains the designer's incorporation of alchemy precepts into his work. This is very fascinating stuff.