It's 1964 and the Beatles have arrived on our shores - Beatlemania reigns supreme.

I WANNA HOLD YOUR HAND is a funny, exuberant, glad-to-be-a-teenager movie. It defies logic and common sense, but that's exactly what we like about it.

Though not brilliant or classic, it is still worth a second look because of its great cast and because for those of us of a certain age, it brings the 60's back again - with a vengeance.

The film is first time directed by Robert Zemeckis (Stephen Spielberg in his first producer role). They capture the hysteria which grasped New York once upon a rock m' roll time. I was there, believe me, it was real.

In 1964, the Beatles made their official American debut on The Ed Sullivan Show which aired live every Sunday night, showcasing a variety of acts.

The popular show was hosted by Ed Sullivan, a stiff, awkward, kind of gangly guy with an odd way of speaking I always got the impression that he was mostly clueless about the 'talent' which appeared on his stage. But the formula worked for him and his show was watched by millions every Sunday night at 8.

This is such a sweetheart of a movie. An homage to The Beatles whom we never actually see except  on tape during part of a televised performance and from afar, as figures on a TV stage. It's all very well done. We also get a view of booted feet, pants cuffs, hands and backs here or there and hear a few words spoken in their inimitable Liverpool accents.

Of course it's mostly an homage to the adoring zeal of their fans who, for one moment in time, seemed to take over the city. 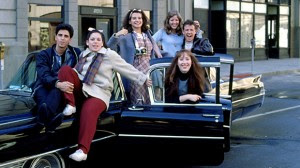 The film stars a cast of unknowns (the stand-out is Wendi Jo Sperber as Rosie Petrofsky) playing a bunch of kids who jump at the chance to get a glimpse of the Fab Four upon the group's first trip to New York. To that end they (and everyone else anywhere near the Plaza Hotel on that day) run amok in their eagerness to sneak past the cops and hotel guards.

That's really the basic plot. It's what happens when these kids get caught up in the frenzy of it all that makes for such an entertaining movie.

I worked in the area in the early 60's and of course, during lunch I walked over to the Plaza to see what I could see. Other than cops and droves of dreamy-eyed girls hanging around the hotel, nothing much. But there was an electricity in the air. I was still young enough to feel it - fun time in the city.

Wendy Jo as she appeared on the TV show, BUSOM BUDDIES which starred Tom Hanks.

The stand-out in the cast is Wendie Jo Sperber as an adorably plump teenager (with a bow in her hair) whose zeal for the Beatles is hilarious to watch. She's given to screaming and running for the nearest phone in a frenzied attempt to win tickets to see her idols. A local radio station is running a Beatles quiz leading right up to the 8 P.M. showtime. Wendie Jo as Rosie Petrofsky steals the movie, far as I'm concerned. She is delightful.

Nancy Allen is Pam Mitchell who, at first, is resistant to driving into the city in a borrowed limousine driven by a sweet looking kid with a learner's permit. She, at least, has a modicum of common sense. But that doesn't stop her going along with the insane plan - though she is supposed to get married the next day. "I hope Eddie doesn't find out..." is her mantra.

It takes the kids seven hours to drive to Manhattan from Maplewood, New Jersey - they take a detour to Philadelphia when Larry Dubois, the driver, a hapless Mark McLure (Jimmy Olsen in SUPERMAN The Movie, which of course, eclipsed this little gem in 1978) mis-reads a highway sign.

It is future journalist, Grace Corrigan's idea (she is played by Theresa Saldana) to drive up  to the hotel in a limo since the cops will not allow taxis full of kids near the Plaza entrance. Her plan is to take a few pictures of the Fab Four and sell them to Life Magazine.

Eventually the limo packed with kids gets past the harried cops and the girls are deposited at the Plaza, separated by circumstance and set loose to find their way to the 12th floor where the Beatles have a suite.

Pam Mitchell has the experience of a lifetime when, hiding in a food cart (covered by hotel linen), she is delivered to the empty suite (the Beatles have left for the studio but then return) and is forced to hide under a bed - just your typical teenage hijinks.

Earlier, alone in the room, Pam has a great time getting up close and personal with the Beatles' guitars, wineglasses, plates, handkerchiefs, not to mention a hair brush with hairs from one of the Fab Four's fabulous mops. She even gets to roll around on one of the beds AND touch the Beatles's clothing. Nancy Allen is very good in these scenes as an adoring fan who hadn't realized she was quite so adoring.

Another stand-out is Eddie Deezen, who is terrific as a geeky, screech-voiced, hopeless nerd (name-changed to Ringo Klaus in honor of his idol) whom Rosie latches onto. He's grabbed an empty room at the hotel and filled it with Beatle-related paraphernalia. Part of his horde is a mound of grass the Beatles stepped on in the park. It is his most treasured possession. This kid is scary.

As showtime approaches, the kids are all over the Plaza, the streets and the TV studio in hopes of outwitting hotel personnel, guards and cops. Rosie Petrofsky is particularly physical in her relentless quest for a glimpse of Paul, John, George or Ringo. At one point, she commandeers a Plaza elevator after first kicking out the operator who lands on an indignant hotel patron.

Ah, kids. They really know how to have fun.

In the end, through various and nefarious ways and means, the girls (and 'Ringo' Klaus) get to attend the Ed Sullivan Show where Rosie promptly faints dead away as the Beatles begin their song.

There is a heck of a funny ending involving the borrowed limo and finally, all's well that ends well for a bunch of kids from Maplewood, New Jersey.
Posted by Yvette at 1:10 PM