Hold on to your hats, another great read! WHAT ALICE KNEW A Most Curious Tale of Henry James & Jack the Ripper by Paula Marantz Cohen 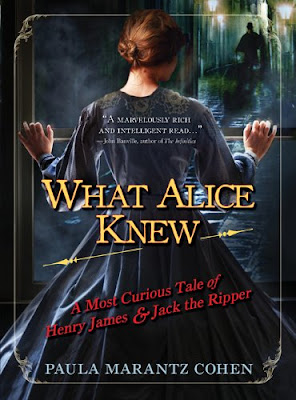 Paula Marantz Cohen is an exceptional writer of fiction and non-fiction. Among her non-fiction works are: SILENT FILM AND THE TRIUMPH OF THE AMERICAN MYTH and ALFRED HITCHCOCK: THE LEGACY OF VICTORIANISM.

The Hitchcock book sounds especially interesting to me. But I'm more familiar with Cohen's humorous fiction:

JANE AUSTEN IN BOCA (Pride and Prejudice among the geriatric set at a senior living complex in Florida) A book that should never have worked but somehow does. I loved it.

JANE AUSTEN IN SCARSDALE, a retooling of PERSUASION among the teaching set at a school in the upstate New York suburb. Another inventive take on a classic in which Marantz Cohen does her own fancy footwork and makes the story her own.

MUCH ADO ABOUT JESSIE KAPLAN, a novel about family turmoil and a grandmother who thinks she was Shakespeare's girlfriend in another life. Hilarious.

But now the author has gone in a totally different direction and written a captivating mystery in which the scholarly American James family, Henry, William and their sister Alice, come up against the pitiless, horrific Victorian bogeyman, Jack the Ripper.

WHAT ALICE KNEW A Most Curious Tale of Henry James & Jack the Ripper is the second historical mystery I've read so far in 2012 and was the book I hinted at when I mentioned, earlier in the week, that I'd read two FABULOUS books already in the new year.

I wasn't kidding. I LOVED this book. I kept putting off reading the last few pages so I wouldn't have to leave the world of Henry James and his brother William and sister Alice. Not to mention their friends, the artist John Singer Sargent, author and playwright Oscar Wilde, painter Walter Sickert and other assorted artistic Victorian wheelers and dealers. The social circle in which the James siblings moved, immediately grabbed my attention.

Victorian England was a very divided world of rigid social classes, with the rich on one end and the abject poor on the other. When a killer strikes in the seamy Whitechapel area of London, violently slashing several prostitutes and earning himself the infamous name of Jack the Ripper, the police are baffled. In fact, to this day, the actual killer has never been satisfactorily identified - no matter what Patricia Cornwell says. (Though I tend to agree with her take. It makes as much sense as any other.)

In Marantz Cohen's book, William James, a professor of English Philosophy and a proponent of the new science of Psychology at Harvard University, receives a letter from Scotland Yard requesting his help in the matter of the Whitechapel murders.

He sets sail for Europe and once in London reunites with his brother, novelist Henry (author of THE GOLDEN BOWL, THE TURN OF THE SCREW, THE AMBASSADORS, THE PORTRAIT OF A LADY, WINGS OF THE DOVE and other classics) and their bed-ridden, invalid sister Alice.

Author Paula Marantz Cohen captures the differing personalities of these three exceptional individuals and immediately draws us into their lives. She's created a place where fiction and reality will overlap as she sets the James family to solving a monstrous series of crimes. Again, with her talent and facility for making the most absurd ideas come to life, Marantz Cohen takes her far fetched notion and makes it work.

Alice is an especially interesting character, a woman who spends most of her days in bed though admittedly there is nothing really wrong with her. She has a propensity for fainting and/or some sort of  physical weakness and that is enough to keep her from venturing forth. She lives a secluded life with a friend, a woman who takes care of her and sees to her comfort.

The details of this long-term relationship are hinted at but never revealed. In fact, of the three siblings, William is the only one who ever married. Henry James was a lifelong bachelor of unresolved sexual identity - a man who could not trust himself to be what his nature probably intended.

Alice insists on knowing all the details of the Ripper case as soon as William reveals he is consulting with Scotland Yard and going about with an Inspector Abberline. She, Henry and William have family counsels in which she makes the point that a bed-ridden woman with a functioning mind is perfectly suited to solving a crime.

The men don't scoff at this as might other Victorian era gentlemen, English or American, which is a gold star in their favor. Henry and William respect their sister and are wise to her gift for noticing details others might overlook.

This is not really a whodunit though Cohen gives us a couple of plausible suspects - one of which is the same person writer Patricia Cornwell is convinced was the actual Ripper. (She claims to have proved it in her book, PORTRAIT OF A KILLER.)

Marantz Cohen details dark events and hairbreadth escapes, an almost love affair and sinister doings enough to keep the attention. But for me, the great attraction of this book are the vivid characters driving the story. They are what kept me reading late into the night.

The author also uses multiple viewpoints effectively. We move from Henry's point of view, to William's, to Alice's in a very smooth and orderly fashion. We learn about the murders and are repulsed. We become aware of Henry's fears and insecurities, his weakness for alcohol and good food, his devotion to his writing, we learn of William's earlier nervous breakdown, his fear of becoming weak again, his attraction to a beautiful Jewish woman from a wealthy family.

We learn that Alice  has an active mind and loves gossip and the visits of good friends such as Sargent and his sister. We learn she is not indifferent to flattery. We worry that she will fall prey to the evil lurking in the streets of the city.

We attend dinners, listen to gossip, move about the city and wish we could linger with the James family indefinitely. I never wanted this book to end. I admit it. I was caught up in this Victorian world.

Soon as I could I reserved Colm Toibin's book about Henry James, THE MASTER and picked it up today at the library. I also found a copy of James' THE GOLDEN BOWL on my shelf and added it to my definite TBR pile. I would love to find a good biography of John Singer Sargent.

I am also anxiously waiting to see what Paula Marantz Cohen writes next.

Many thanks to Bev at her blog, MY READER'S BLOCK for calling this book to my attention.
Posted by Yvette at 12:31 PM