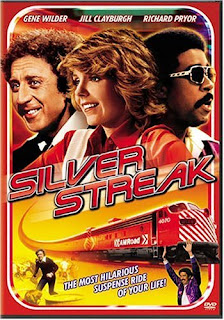 Let me just say right off the bat that I have a really hard time with Gene Wilder in the role of romantic leading man. (And no, YOUNG FRANKENSTEIN doesn't count. He was the leading man, yes, but it was hardly a romantic lead. He fit right in because Mel Brooks' ode to Frankenstein was a madhouse. Wilder is great with that sort of thing.)

I fast forward through the love scenes in SILVER STREAK because, between you and me, Wilder and Jill Clayburgh together in bed give me the heebie-jeebies. I mean, it's so wrong. Not only is he not good looking enough to hold the screen with her, but that fuzzy hair!!! And those clothes! He's wearing pants with no belt!

It's like watching Harpo Marx playing a dashing romantic figure. Now, I adore Harpo, but picture him as the lead in NORTH BY NORTHWEST...See what I mean?

Plus Jill Clayburgh behaves as if she's sleep-walking through the part. None of the Eva Marie Saint sophisticated vitality as in NORTH BY NORTHWEST. Jill Clayburgh is woefully miscast.

Now don't get me wrong, I love Gene Wilder. He was wonderful in THE PRODUCERS with Zero Mostel. (A fabulous film!) But here's the thing, Gene is a born second banana. As second banana he is perfection. Not so much as leading man in a romantic thriller with love scenes and goopy music. He's also a very talented physical comedy and general silliness specialist. Dashing and heroic he is not.

Here he plays George Caldwell who has something to do with publishing. He's taking a a trip on the Silver Streak from L.A. to Chicago so he can enjoy the rest and relaxation of train travel. (That's what the screenplay says.)

While on the train he finds love, gets saddled with a murder mystery and shoots a bad guy with a spear gun.

SILVER STREAK, a 1976 film, is directed by Arthur Hiller - who if you ever saw him act, you know he's not exactly a bundle of laughs to begin with - in a very perfunctory, TV movie-of-the-week, sort of way. There were so many scenes that could have been MUCH better with a snip here and there. A slightly different camera angle. Many scenes that just went on too long.

However, there's a good running gag throughout the film with George being thrown or having to jump off the train and then finding ways to get back on. But it's all handled in a rather heavy-handed manner. To think what Billy Wilder might have made of this.

Another thing: the move can't make up its mind if it's a thriller or a comedy, there is NO sophistication or wit to tie the thing together. The killings are bloody and make you cringe, and yet later, we have hilarious comedy.

Yet I found myself watching it again. Why? Because I'd remembered how hilarious Richard Pryor had been. He steals the movie as Grover  T. Muldoon, whom we first meet sitting in the back of a police car wearing handcuffs. What a talent that man was. But what a foolish human being he turned out to be.

Well at least we have his film performances to remember him by. SILVER STREAK being one of his best.

His scenes with Wilder are worth any price of admission. There was always something oddly touching about Richard Pryor on film. At his manic best, he still had the most charming, self-effacing smile. Just a wonderful screen presence.

Wilder and the sheriff are pretty funny too as he tries to explain what the heck has been going on on the train - three murders and counting. Of course the sheriff doesn't believe him and turns the tables on Wilder.

"You need to figure out who killed Rembrandt!"

An aside: The 70's were not a good decade for men's fashions. (Pants with NO belts!?) Not for women's fashions either, come to think of it. I mean, the clothes were dreadful! So, if you weren't extremely good looking it was hard to carry it off. Even Patrick McGoohan who is reasonably attractive, can't carry off the clothes and hair - here as the bad guy. He plays a high society art dealer run amok.

There's a scene in which he burns some papers signed by Rembrandt which, more than the blood-letting, gave me the chills. Of course nobody mentions that the letters would have been written in Dutch, not English. But that's a minor detail.

The scenes in the Kansas City train station when George pretends to be black are laugh out loud hilarious and not one bit insulting to anyone, except maybe to human beings in general. I laughed until I cried. I mean, this is Wilder's genius - he can get into lunacy quicker than anyone AND make it seem perfectly normal. He just needs a bit of encouragement. Richard Pryor gives him that encouragement.

The odd thing is that there don't seem to be any African American passengers on the Silver Streak. All the black people on board are train workers, waiters, conductors and the like. The 70's were not all about enlightenment.

Near the end of the film, there's a preposterous gun battle between the Feds and the bad guys with a panicking group of passengers in the middle. The train passengers had been asked to leave the train because of some sort of government investigation. Very far-fetched.

But then comes the runaway train ending which is quite thrilling and fun to watch.

And in addition: I noticed that there seems to have been a previous SILVER STREAK film done in the 1930's. I'd never heard of it, but I stumbled across some fabulous movie posters. Take a look: 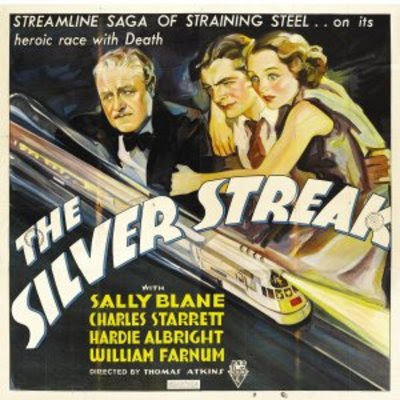 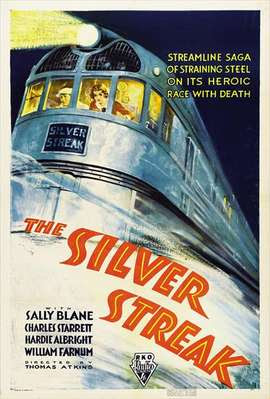 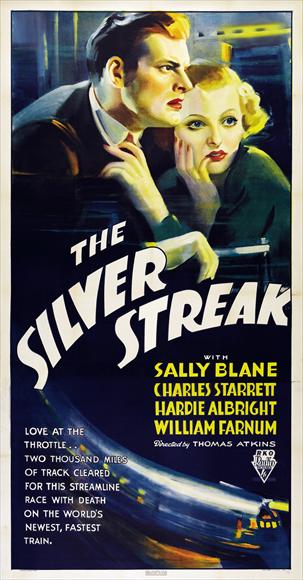 Watch the trailer for the 1976 SILVER STREAK movie here.
Posted by Yvette at 2:10 PM