Tuesday is Overlooked (or Forgotten) Film Day around here, so don't forget to check in with Command Central over at Todd Mason's blog, SWEET FREEDOM, for the full list of participating bloggers.

Today I'm talking about a film that few have seen and even fewer have heard of. Sometimes it happens that way to a really good movie - no rhyme or reason to it.

HEIGHTS is a 2005 film directed by Chris Terrio and starring the wonderful Glenn Close. It is a Merchant Ivory production though the setting is modern day Manhattan. A city portrayed as every bit a character in this compellingly told story of a 24 hour period in the unravelling lives of five New Yorkers. 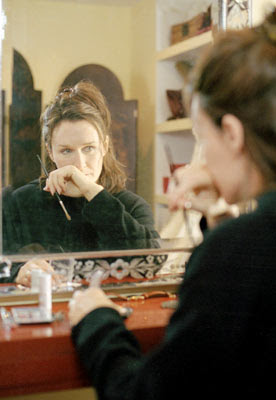 Glenn Close plays Diana, a famed Broadway actress currently rehearsing for a play and teaching an acting class at Julliard. She lives a typically high profile NYC life which includes, that very evening, a cocktail party at her apartment - a place which will be crowded with the usual creative wheeler dealers amongst which various characters will interact.

The rather hard-boiled Diana pretends to a sophistication which is slowly crumbling as she realizes that her husband is cheating on her yet again. Open marriages are obviously not all they are cracked up to be.

Diana's daughter Isabel (Elizabeth Banks), a photographer, is having second thoughts about her upcoming marriage to Jonathan (James Marsden), the lawyer she lives with. Jonathan has secrets -deep secrets that have him behaving a bit out of sorts, especially since he's found out about a certain photo exhibition being assembled by a European photographer he once knew.


The lives of these characters will intersect with Alec (Jesse Bradford), a sensitive young actor looking for his big break and Peter (John Light) a driven journalist. Later that day, Isabel will be charmed by Ian (Andrew Howard), an insouciant Welshman unimpressed with the artsy literary and Broadway crowd at the party.

Despite these high maintenance implications, HEIGHTS remains a low-key, intriguing study of a 24 hour period in the lives of several flawed characters in search of their own particular happiness.  An elusive search amid the compression of a fast moving, pressure cooker city. A city which, by the way, has never looked better. New York is captured beautifully by cinematographer Jim Denault. He makes Manhattan look like the series of vibrant neighborhoods it really is.

From differing viewpoints in this day-in -the life-of, we see how difficult it is for human beings to really connect, to reveal something of their true selves, especially when pretense is the easy way out.

The wonderful thing about the screenplay is that each character is allowed to play out his or her own insecurities and fears without a lot of dramatic hoopla, though that's not to say that dramatic things don't happen. They do, indeed.

Several surprises are to be revealed in an almost haphazard manner as happens often in life. Each character's storyline will intersect or brush by the other until in the end, a day which began in its own defined, familiar way, will end quite differently.

I'm usually not a fan of stories of 'young moderns' dealing with their angst, but here it's all handled with finesse and with Glenn Close in command of a group of excellent younger actors, it works splendidly.

HEIGHTS is a film that got lost somewhere in the shuffle, I suppose. Possibly the title didn't do it any favors. But it's a film that definitely deserves to be seen.