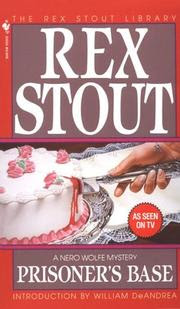 The Vintage Mystery Reading Challenge is hosted by Bev at her blog, MY READER'S BLOCK. I'm nearing the end of my category - Take 'Em To Trial (16 + books) and since I read vintage all year round, I'll just continue reading and listing as we go along. Please check here to see who else is participating and what books they've been reading.
PRISONER'S BASE is a re-read for me, since I am currently in a Nero Wolfe Reading Binge mood, so I'm actually killing two birds with one stone - more or less. This is one of the Wolfe books with several cold-hearted murders and I admit, I like it when there are multiples - though I understand they can't ALL be multiples or I'd soon grow tired of the blood letting. But in this one the killer is particularly cruel and hard-hearted and Archie Goodwin feels a tug on his conscience.

It's kind of hard to like Wolfe in this one, especially in the first third of the book when because of his truculence and stubborn misogynist inclinations, a woman is murdered. He excuses it and his conscience and you might agree with his sophistry and feel differently about it, but I don't. I blame both Wolfe and Archie for being so self-indulgent that they can't spot real trouble when it shows up in the form of a young heiress needing to spend the night at the brownstone. Okay, so Priscilla Eads is a rich gadabout and makes certain imperious assumptions because she is used to getting her own way, but it's obvious that something is in the works and sending her back out into the street late at night is not the way to handle her.

Priscillia is on the eve of her 25th birthday and a Big Payoff - a huge inheritance from her father. But his will states that if she dies before that birthday, the money goes back into the Softdown Corporation (founded by Eads) to be divided up by the board of directors.

Once she's murdered, strangled that very same night, in her apartment by a killer who was waiting for her return, Archie feels that tug on his conscience. Wolfe doesn't. In fact, he refuses to help Archie in his quest to find Priscilla's killer primarily because there's no money in it for him. Hey, a man's gotta' live.

But when Archie is picked up downtown by his arch enemy, Detective Rowcliff, for impersonating a police officer (strictly speaking, he didn't), pursuing the investigation on his own, Wolfe steps in. He has been picked up at the townhouse, by Rowcliff barreling his way past Fritz at the front door, daring to clomp his way up the stairs to Wolfe's plant room. Wolfe's outrage knows no bounds and he informs the police that Archie is now his client. Archie overhears all this through a slightly opened door while down at police headquarters wandering about looking for a phone.

"This whole performance," Nero Wolfe was saying, "is based on an idiotic assumption, which was natural and indeed inevitable since Mr. Rowcliff is your champion ass - the assumption that Mr. Goodwin and I are both cretins. I do not deny that at times in the past I have been less than candid with you - I will acknowledge, to humor you, that I have humbugged and hoodwinked to serve my purpose - but I still have my license, and you know what that means. It means that on balance I have helped you more than I have hurt you - not the community, which is another matter, by you, Mr. Cramer, and you, Mr. Bowen, and of course you others too."


So the DA himself was in the audience.

"It means also that I have known where to stop, and Mr. Goodwin has too. That is our unbroken record, and you know it. But what happens today? Following my customary routine, at four o'clock this afternoon I go up to my plant rooms for two hours of relaxation. I had been there but a short time when I hear a commotion and go to investigate. It is Mr. Rowcliff. He has taken advantage of the absence of Mr. Goodwin, whom he fears and petulantly envies, and has entered my house by force and - "

"Shut up!" Wolfe roared...In a moment he went on, not roaring but not whispering either, "As you all know a, a policeman has no more right to enter a man's home than anyone else, except under adequately defined circumstances. But such a right is often usurped, as today when my cook and housekeeper unlatched the door and Mr. Rowcliff pushed it open against resistance, entered, brushed my employee aside, and ignored all protests while he was illegally mounting three flights of stairs, erupting into my plant rooms, and invading my privacy."

I leaned against the jamb and got comfortable.

"He was ass enough to suppose I would speak with him. Naturally I ordered him out. He insisted I must answer questions. When I persisted in my refusal and turned to leave him, he intercepted me, displayed a warrant for my arrest as a material witness in a murder case, and put a hand on me." The voice suddenly went lower and much colder. "I will not have a hand put on me, gentlemen. I like no man's hand on me...I had assumed, charitably, that some major misapprehension, possibly even excusable, had driven Mr. Rowcliff to this frenzied zeal. But I learned from you, Mr. Bowen, that is was merely an insane fit of nincompoopery...

"I didn't have a client this morning, or even an hour ago, but now I have. Mr. Rowcliff's ferocious spasms, countenanced by you gentlemen, have made the challenge ineluctable. When Mr. Goodwin said that I was not concerned in this matter and that he was acting solely in his own personal interest, he was telling the truth. As you may know, he is not indifferent to those attributes of young women that constitute the chief reliance of our race in our gallant struggle against the menace of insects.

He is especially vulnerable to young women who possess not only those more obvious charms but also have a knack of stimulating his love of chivalry and adventure and his preoccupation with the picturesque and the passionate. Priscilla Eads was such a woman. She spent some time with Mr. Goodwin yesterday...Within three hours of her eviction by him at my behest, she was brutally murdered. I will not say that the effect on him amounted to derangement, but it was considerable. He bounded out of my house like a man obsessed, after telling me that he was going single-handedly after a murderer.....It was pathetic, but it was also humane, romantic, and thoroughly admirable, and your callous and churlish treatment of him leaves me with no alternative. I am at his service. He is my client."

...The dry cutting voice of Bowen, the DA, put in, "All that rigamarole was leading up to that?"

I pushed the door open and stepped in.

After that wonderful tirade, I forgave Wolfe his initial bad behavior and read on. The murderer isn't finished yet. It will take a great deal of work on the part of Wolfe, Archie and the rest of the guys, to finally flush a daring, cold-blooded and very nasty killer out into the open.