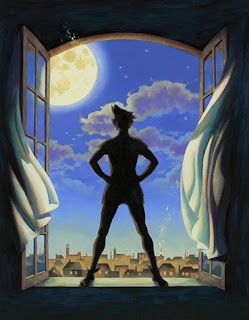 Today is the birthday of the man who wrote the immortal words: "All children, except one, grow up." J.M. Barrie (1860 - 1937), of course, created PETER PAN, of all his work, the most famous and most enduring. Read more about Barrie at this link.

Kind of a rambling post coming up, but I promise it all has something or other to do with Peter Pan, Barrie's magnum opus.

The one and only Broadway show my dear mother ever saw in her lifetime was PETER PAN. We took her one year for her birthday or maybe, Mother's Day. I can't remember who was starring as Peter at the time - I think it was Sandy Duncan. But I do remember that the absolutely wonderful Christopher Hewett played Captain Hook. And I also remember embarrassing myself by laughing out loud (I have one of those laughs you can hear a mile away.) just BEFORE he began one of his songs - couldn't help it, his body movements were just hilarious - and having Hewett look askance into the audience in my direction. HA! But he laughed and went on with the song. (Hewett played the over-the-top B'way director, Roger DeBris, in the original version of Mel Brook's THE PRODUCERS with Zero Mostel.) I also remember my mother's amazement when Peter 'flew' over the audience. I think it frightened her a little, but it also thrilled her. 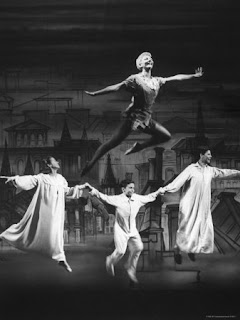 Of course, I do also remember Mary Martin's Peter Pan which used to show up regularly on 1950's television, in black and white. For many of us growing up at that time, Martin WAS Peter Pan - she owned the part.

To this day, I still have the Disney version of PETER PAN. Nothing can beat the beginning of the film when the Darling children are first visited by Peter - he wanting to hear more of Wendy's stories to her younger brothers. Nothing can beat that gorgeous townhouse they lived in. Or Hans Conreid as Mr. Darling - he was the voice of Captain Hook, too. Though I love the Disney visualizations of Hook and Smee and the crocodile, I'm not so happy with the second half of the film because it just goes on too long, what with the unfortunate Indian scenes and all. But I don't hate it. I just prefer to watch the first half. 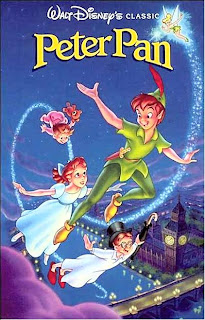 The flight by the children over London is so beautifully rendered by the Disney animators. I still thrill to it and the wonderful accompanying music. I could watch this scene over and over. And I always regret that Nana, the St. Bernard, who was tethered outside, couldn't go with them on their adventure.