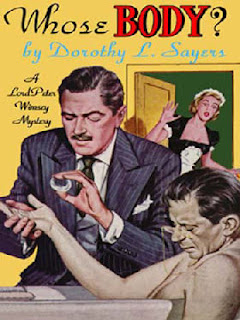 Okay, my blog is acting screwy again. This post has suddenly moved ahead to today. It was actually posted a few days ago. I have no clue how this happened. But here we are. It must be a new hop, skip and jump thingy. Surprise! Stay tuned to see what other new and exciting moments Google Blogger has in store for us.

The Vintage Mysteries Reading Challenge is run by Bev at her blog, MY READER'S BLOCK. Even though I've already complied with challenge requirements for my level, I'm going to continue posting any and all vintage books (written before 1960) that I happen to read. If it's okay with Bev, it's okay with me.

WHOSE BODY? by Dorothy Sayers is a book I don't remember ever reading though I'm thinking I must have, way back one upon a time. But nothing about it seems familiar, so it's possible that somehow I skipped it. Anyway, I want to give Bev a hug and a thanks for sending me a copy upon my Challenge completion. I read it almost immediately in one fell swoop.

This is a book very much of its time with stereotypical racial comments which annoyed me but given the year the book was written in, did not surprise me. It's enlightening how a few writers managed to avoid this sort of thing, but many writers didn't. If I ceased reading every book from that era because of stereotypes, I'd hardly read any vintage at all. The comments in WHOSE BODY? are in bad taste, but not overly egregious. Wimsey and his coterie were who they were.

The dead body of a man has been discovered (by a naturally agitated tenant who lives in the flat with his deaf mother) in a stranger's bath tub, naked except for a pair of golden prince-nez glasses fastened to his nose. When called in, Wimsey almost immediately surmises that he is not the well-to-do man the killer would have us believe - the corpse's hair is freshly cut, styled and perfumed, his fingernails manicured and he's recently been shaved. But Wimsey notices some physical incongruities which lead him to believe the man is probably an indigent tramp.

At the same time, across town, a very wealthy Jewish man has gone missing from his home. Reuben Levy is a well-liked financier, married to a woman from an old and established English family. He was seen coming home late one night - by a servant - and up to his room. But sometime during the next few hours, he appears to have left the house, minus his clothing and simply disappeared into the night.

The cops think the body in the bathtub is the missing financier. Wimsey suspects otherwise. With the help of his incredibly efficient man-servant, Bunter, and his detective friend Parker, he is soon on the hunt for the missing Reuben Levy and the true identity of the man in the bathtub. Whose body? Indeed.

This being the first of the Peter Wimsey books, there are all sorts of tics and clunky bits - most especially while Sayer is establishing Wimsey's idiosyncrasies and manner. Some of his eccentric flights of fancy are not only distracting, but really, rather off-putting. But this sort of thing was ironed out a bit in future books, so it all balances out eventually.

I did love the use of Wimsey's mother, the Dowager Duchess of Denver in some key moments - she is a woman given to rattling on in a charming sort of way. There's even a scene near the end when Wimsey has a momentary set back - he is still suffering from post traumatic stress disorder after the horror of WWI - when his mother steps in and bundles him off to his brother's county seat. Wimsey's elder brother is the current and excruciatingly straitlaced Duke of Denver, don't you know.

But once recovered from the attack brought on by the stress of the case, Wimsey is back on the job hunting down a clever and conscience-less killer. And I must say that although I suspected who the murderer was almost from the beginning I still enjoyed reading the book and seeing how Wimsey and Parker and, of course, Bunter, would wind it all up. It's very interesting too that Wimsey's link-to-link analysis of how a killer is most often fastened to his crime, is exactly what made me recognize the killer early on.

A terrific, if anachronistic read. If you've ever thought of reading the Peter Wimsey books, this is the place to start. Although, in truth, if you wanted to, you could jump right in with any of them. One thing: I've never for one moment believed that Wimsey, in the later books, had any real interest in Harriet Vane. (Never believed he was all that fond of women, if you want the truth.) I never bought the love story. And why Sayers decided to marry him off is anyone's guess. But maybe that's just me.

Still, the books are Golden Age of Mystery Classics and very well worth looking into.

Note: Though the copy I received from Bev was a nice one, it did not have the cover I'm showing above.
Posted by Yvette at 9:39 AM

Email ThisBlogThis!Share to TwitterShare to FacebookShare to Pinterest
Labels: Vintage