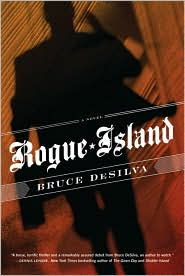 This is the debut that just won the Edgar Award (on Thursday) for Best First Novel and deservedly so. ROGUE ISLAND is one of those rare books that actually lives up to it's hype. I admit I was reluctant to read it precisely because of all the hype - I'm contrary like that. But I threw caution to the winds, and dived in - read it in one night. Yes, the book is THAT good.

But only if you like crisply worded, fast-paced, funny, cynical, crime thrillers with heart and a jaded protagonist whose wise-guy p.o.v. is often wincingly on target.

Who knew that Rhode Island was this nose- deep in crime and political chicanery? I mean, how often, really, do you even think about the tiny state? Perhaps that's why, according to DeSilva, the people of R.I. struggle with the burden of an enormous inferiority complex - a complex that apparently lingers at the heart of all of the 'Island's' woes. I admit I learned quite a bit about Rhode Island reading Bruce DeSilva's book. Not necessarily because I wanted to, but because I enjoy a well-written story peopled with terrific 3-D characters and there just happened to be enough stuff about the state to make the geography thing interesting.

Liam Mulligan (LOVE that name!) is the hard-nosed crime beat reporter for a Providence paper, another in a long line of American newspapers dealing with fiscal decay in the age of on-line instant news - the world it is a'changing. The cynical Mulligan, in his forties, is an old time hand at reporting whatever dark, dank and dirty stuff the politicos and the local crime bosses are up to. He knows everyone and is not above a little shoving, pushing and quid-pro-quo-ing, to get the job done. Mulligan is currently snagged in the dying throes of a nasty divorce from the foul-mouthed, jealously deranged, Dorcas. You have to laugh as she calls him daily, screeching imprecations at him - always with the same opening gambit. In the meantime, he is attempting to begin a romance with the paper's court reporter, the beautiful and ambitious, Veronica Tang.

What I liked most about Bruce DeSilva's writing (besides his obvious talent) is the devil-may-care attitude and authority of style he displays. The novel has the feel of a seasoned writer just going along, telling a great fluid story with ease and dexterity - he makes it look easy - the best kind of writing. He also doesn't wrap everything up with a nice big bow at the end. There's no tidy denouement. He leaves plenty open and scary, maybe for the next time. I admit, I am one who actually likes a good, tidy ending. But sometimes, as in this book, the opposite works out best. I try to keep an open mind.

Serial fires seem to be burning down Mulligan's old Providence neighborhood. Mount Hope is where Mulligan grew up and it bothers him that all his old haunts, his good memories, are going up in smoke. Places he knew as a kid growing up in the blue collar ramshackle neighborhood, are being turned into cinders, lives are being lost. Mulligan and his childhood friend Rosie the fire chief see too much of each other lately at blackened crime scenes of dead children and injured firemen. Mulligan knows that the two cops in charge of the arson investigation are just not up to the job:

From the outside, the drab government building looked like randomly stacked cardboard boxes. Inside, the halls were grimy and shit green. The johns, when they weren't padlocked to save civil servants from drowning, were fragrant and toxic. The elevators rattled and wheezed like a geezer chasing a taxi. I played it safe and climbed the gritty steel stairs to the third floor, then navigated four narrow hallways before I spied a sign "Chief Arson Investigator, City of Providence" painted in black on a the opaque glass window of a battered oak door. I shoved it open without knocking and stepped inside.

"Get the fuck out of my office," Ernie Polecki said.
"Good to see you too," I said, and slumped into a wobbly wooden chair across from his army-green steel desk.
Polecki lit a cheap black stogie with a disposable lighter, leaned back in his oak office chair, and thunked his weary wingtips on a green blotter scarred with tobacco burns. The chair groaned under the weight he'd packed on since the wife left and Kentucky Fried wasn't just for breakfast anymore. His assistant, a bum named Roselli, who got the job because he was first cousin to the mayor, sat stiffly on a gray metal chair under a cracked window skimmed over with ice on the inside.
"So it's arson again," I said.
"Either that or somebody thought it was a good idea to burn trash in the basement," Polecki said. "With all the junk they had piled up down there, that dump was begging for a fire anyway."
"Could have told you that on this on the phone, Mulligan," Roselli said.
"Yeah," Polecki said.
"But I couldn't have looked this over by phone," I said, and stretched for the case file on the desk.
Polecki raised his right hand and slammed it down so hard that the desk bonged like a cracked bell, then looked startled when he saw that the file wasn't under his fat knuckles. It wasn't anywhere else on the desk either. He glared at me. I shrugged. Then we both looked at Roselli, back in his seat now and clutching the file to his bony chest. He'd moved so fast I'd almost missed it.
"Investigative file," Roselli said. "Not open to reporters or assholes, and you're both."
"Sure," I said, "but how about to a First Amendment watchdog from the Fourth Estate?"
"Not to one of them either," Polecki said.
"Any connection to the other fires?"
"None," Polecki said.
"Ain't nothin," Roselli said.
"Any pattern to who owned the buildings?" I asked.
...Polecki's stogie had gone out. He relit it, blew the exhaust at me, and grinned like he'd accomplished something. Then he took a few more puffs and flicked hot ash into his red dollar-store wastebasket.
"So Mount Hope is just having a run of bad luck?" I asked.
"Luck of the Irish," Polecki said.
"Worse kind," Roselli said.
...A wisp of smoke rose from the wastebasket, where the cigar ash smoldered in a greasy fried-chicken bucket.
"Look, asshole," Polecki said, "I told you before, we got no comment on an ongoing investigation."
"Which this is," Roselli said. "Why don't you go cover a traffic accident? Better yet, have one."
As much as I enjoyed Roselli's sense of humor, I decided not to stick around for another punchline. The wastebasket was smoking like Polecki's stogie now and not smelling much better, so it seemed an excellent time to go. I pulled the fire alarm in the hallway on my way out. Who knew the damned thing would actually work?
If this kind of writing doesn't convince you to read ROGUE ISLAND, then Bruce DeSilva isn't speaking to your sensibilities. On the other hand, he is speaking to me and I loved the book. I can't wait for the next installment in the grungy, gritty life of Liam Mulligan, ace reporter for a Rhode Island daily metropolitan newspaper.