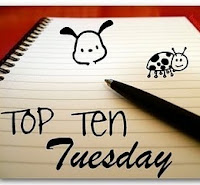 If you're familiar at all with Top Ten Tuesday, you know that it's a weekly meme hosted by the gals at THE BROKE AND THE BOOKISH - it's also a lot of fun. Each week we're handed a different Top Ten theme and then turned loose. This week it's Top Ten Minor Book Characters. Not as easy as it sounds. Some minor characters play very important parts, some are just window dressing, some are just plain too good or too much fun to be forgotten. Lots to choose from.

Here's my list this week, as usual, in no particular order:

1) The White Rabbit in ALICE IN WONDERLAND.
Okay, so he's the smartly dressed little fuzzy guy who gets the ball rolling, but really, short of showing up here and there and leading Alice on a merry chase, he really doesn't have much else to do. He's always disappearing just when Alice catches a glimpse of him. But without him, there is no story. I like his little vest.

2) Mycroft Holmes in the SHERLOCK HOLMES stories by Conan Doyle and also in the Holmes and Russell series by Laurie R. King, most especially in THE BEEKEEPER'S APPRENTICE. A character who is described as being even more brilliant than his brother. Someone I think of as being stolidly enigmatic. A mover behind the scenes - but only from his home to his club and vice versa. A man almost as important to the operation of government as the Prime Minister and yet few know of his existence. Mycroft and Sherlock - what were their parents thinking?

3) Saul Panzer from the NERO WOLFE books by Rex Stout. If I remember correctly, he shows up in quite a few of them. Saul is described by Archie Goodwin - Wolfe's right hand man - as a little insignificant guy with big ears, an over-sized nose and a cloth cap he wears winter and summer. Yet, outside of Archie and Wolfe, Saul is the best operative in NYC, instrumental in many of the cases but never front and center. His acute observations, his photographic memory, his cleverness and integrity are valued highly by Wolfe and Archie.

4) Fritz Brenner from the NERO WOLFE books by Rex Stout. Fritz is the brownstone's chief cook and bottle washer. He reigns supreme in the Manhattan gourmet kitchen of  private detective Nero Wolfe. Swiss by nationality, and European in outlook and training, he and Wolfe often tussle over what ingredients to add to what French dishes Fritz will cook and Wolfe will or won't eat. Both Wolfe and Fritz take food VERY seriously. In fact, Wolfe will rarely eat any bread that has NOT been baked by Fritz. Devoted to his work and to Wolfe , Fritz is a quiet, solitary figure, who lives in his own rooms in the brownstone's basement - he appears to thrive on routine and his main focus in life is l'haute cuisine as applied to Wolfe's digestion.

5) Dwayne, the philosophical auto mechanic from the EMMA GRAHAM books by Martha Grimes. Dwayne is the guy that 12 year old Emma goes to when she wants to talk about mysterious doings or when she just needs to get something straight in her mind. He's a great guy to bounce things off and he treats her like a grown-up. Usually he's working under a car, so Emma has to sit or lie down to talk until he rolls himself out from under. He appears to have some affection and concern for Emma and I wonder if Martha Grimes has future plans for them when Emma gets older. I think he would be perfect for her and might ease some of the inchoate loneliness and melancholy Emma suffers from.

6) Will and Mill from the EMMA GRAHAM books by Martha Grimes. Will is Emma's inventive brother and Brownmiller (known as Mill) is his friend and cohort. These two seem to have no life outside of the Big Garage, an abandoned building on the Hotel Paradise property which has been turned into a make-shift theater by the two would-be impresarios. They spend all their time in absurdly secret preparations, writing, creating sets and putting on plays like, MEDEA, The Musical. You can't help but smile when they make their appearances in the books. They appear to be just a few years older than 12 year old Emma and I have my suspicions about them. They DO spend an awful lot of their time together. Eccentric, focused and charming, Will and Mill are two of my very favorite creations by the prolific Martha Grimes.

7) Mrs. Plaut, the elderly, canny, persistently deaf and annoyingly endearing landlady to Toby Peters, Private Detective, in the series by the wonderful Stuart Kaminsky. The 'Toby' series is made up of books based in the Hollywood milieu of the 1940's. As WWII rages in Europe, Toby Peters (aka Tobias Pevsner) solves murders and catches crooks in L.A. His clients are usually Hollywood actors or personalities of the times, i.e. Joan Crawford, Judy Garland, Cary Cooper, John Wayne, Eleanor Roosevelt, Albert Einstein, Mae West, etc. The books, though definite mysteries, are often hysterically funny. Mrs. Plaut is one of the reasons. (She persists in thinking that Toby's last name is Peelers and addresses him as Mr. Peelers in every book. He has given up trying to correct her. She also thinks that Toby makes his living as kind of combo book editor and bug exterminator. He has given up trying to disabuse her of that notion as well. I love Mrs. Plaut.)

8) Mrs. Bennett in PRIDE AND PREJUDICE. She is the often hysterical mother of Elizabeth Bennett and four other daughters and thorn in the side to Mr. Bennett. No one seems to love poor Mrs. Bennett - she is such a trial to her family. She is incredibly dense, prone to nerves and outbursts, pushy, uncouth and yet PRIDE AND PREJUDICE would be much less entertaining without her and her absurd machinations. (I most especially liked the way she was portrayed Alison Steadman in the Colin Firth version of PRIDE AND PREJUDICE.)

9) Pickwick the Dodo in the Thursday Next Books by Jasper Fforde. Pickwick is Thursday's oh-so-patient pet, one of the last remaining dodos in existence. (The books are set in a very clever alternate universe where literature plays a HUGE role.) He shows up infrequently and can now and then be heard making a gentle fluttery noise. Pickwick generally doesn't intrude into the storyline in any way, he is just there, a familiar mainstay, waiting at home for whenever Thursday decides to drop in - she leads a very busy life as a Literary Detective. Thursday is very fond of him. I am too.

10) Lord Caterham in THE SECRET OF CHIMNEYS by Agatha Christie. Caterham is a bit more than a minor character (but only slightly), he is my favorite in the large cast created by Christie for one of her best and one of my favorite fun mysteries. Caterham is the titled owner of the imposing British country house known as Chimneys - the main scene of the action in the book. He is intelligent, eccentric, imperious, strictly upper class and yet eminently likable, probably because he possesses a quick wit and an endearing put-upon nature. If all peers were like Caterham, the world would be a better place. (Spoken like a true Anglophile, Yvette.)

To read the Top Ten Tuesday lists posted by the other meme participants, please use the link in the first paragraph. It will gladly take you over to THE BROKE AND THE BOOKISH's Top Tuesday page.