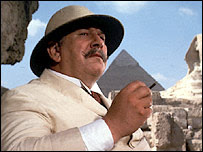 The Crime Fiction Alphabet is a weekly meme hosted by Kerrie at her bloc, MYSTERIES IN PARADISE. This week's letter is P. Don't forget to check this link to see who is participating this week and what books or topics they've chosen.

For me, the letter P means Hercule Poirot, none other. Poirot was first introduced to us in Agatha Christie's debut, THE MYSTERIOUS AFFAIR AT STYLES. He was then a Belgian refugee, a retired policeman, who runs into his friend Captain Hastings and helps solve an 'unsolvable' crime.

From then on there was no stopping Poirot. If there was a celebrated crime usually among the British upper crust, then Poirot was on the job. His French...uh, Belgian, mannerisms duly noted by his often amused patrons who looked at his fussy dressing, his patent leather shoes, his egg-shaped head, and most of all, his waxed mustaches, with some derision. Derision which turned to respect when Poirot gathered everyone in a room and named the murderer.

Poirot's reliance on his 'little grey cells' and his belief in his own infallibility grew wearisome at times, but mostly he delivered the goods and who can quarrel with success? I loved the character even if Christie herself got tired of him and bemoaned the day she thought him up with all his little quirks and peculiarities AND Belgian, to boot. She made fun of him in several books, through her character Ariadne Oliver - fictional mystery writer - and her eccentric Norwegian detective.

But Poirot became a fixture, at least in my world. I found him strangely attractive and sympathetic, even with his out-sized ego and odd appearance. I've always admired brains in men, even men who wore patent leather shoes in all sorts of weather.

My favorite Hercule Poirot books, then and now:

CAT AMONG THE PIGEONS
CARDS ON THE TABLE
HALLOWE'EN MURDER
MURDER IN MESOPOTAMIA
DEATH IN THE CLOUDS
ONE, TWO, BUCKLE MY SHOE
DEATH ON THE NILE
MURDER ON THE ORIENT EXPRESS
MRS. McGINTY'S DEAD
The best portrayer of Poirot in films? In my opinion, David Suchet, without a single doubt. Suchet was born to play Poirot. He 'gets' him perfectly. Suchet uses his eyes as all great actors on film, do, to express thought, intelligence and sympathy.

On the other hand, Peter Ustinov, despite playing him in three films (EVIL UNDER THE SUN, APPOINTMENT WITH DEATH and DEATH ON THE NILE), was just physically TOO BIG and generally too unsympathetic, more a bon-vivant than a detective. Although I did enjoy the unexpected view of Ustinov in a bathing suit and matching cap in EVIL UNDER THE SUN, a fun film with Maggie Smith, Diana Rigg, Jane Birkin and Sylvia Miles - all wonderful. What I remember best about that film are the beautiful opening credits featuring gorgeous watercolors, the Cole Porter music and the terrific cinematography - filmed in Majorca, how could they go wrong? A better screenplay would have helped, but hey, you can't have everything.

Albert Finney as Poirot in MURDER ON THE ORIENT EXPRESS didn't do it for me either. He was just too, too...I don't know, TOO something or other. Too unlikable, I think. Also that hair net - did we really need to see that? But with a great rest-of-the-cast and director - Sidney Lumet - the film is still a very good one. Okay, I admit it, I'm not a fan of Albert Finney in anything, so sue me. He was horrible in the last Bourne film, but that's another story for another day.