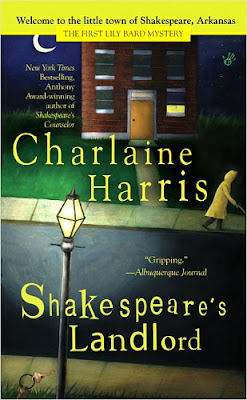 Friday's Forgotten Books is a weekly meme hosted by Patti Abbott at her blog, PATTINASE. Each week, participants in the meme pick a book they view as 'too good to be forgotten' and talk about it. That's it. Go here to see what other books are being talked about today.

Before there was the razzle-dazzle of the 'Girl With the Dragon Tattoo' there was Lily Bard. Or at least that's how I like to think of it. Charlaine Harris is now more into vampires and the undead then anything else (at least in her books), but once upon a time, she wrote a terrific series featuring Lily Bard, a young woman with a dark secret and an attitude. Lily is someone who has totally reinvented herself, a woman who has settled a score, but is having trouble dealing with the aftermath. To survive, she has turned her back on her previous life and moved on.

SHAKESPEARE'S LANDLORD is the first in the Lily Bard books of which there are only five so far and boy do I wish there were more. But this appears to be an unheralded sort of series kind of lost in the shuffle of the vicissitudes of publishing. Harris is more well known now for her Big Time vampire Sookie Stackhouse books - which, by the way, I am not fond of. (I'm in the minority I know.)

Lily Bard first comes to the small town of Shakespeare, Arkansas running from her past, looking for a fresh start. All she wants is to live under the radar, cleaning houses for a living, attending the gym - honing her body and her defensive skills, trying to mind her own business. But when her landlord is murdered and Lily comes under suspicion, she realizes she must look into the small town's secrets to solve the crime. Since she cleans houses, she has access to many of Shakespeare's homes as she quietly goes about her work. Despite her inclinations, reluctantly, she begins to get involved in life once again. While at the same time, a killer begins to focus his dark intentions on Lily.

SHAKESPEARE'S LANDLORD is centered mostly on Lily's secretive life and as you get to know her, you begin to root for her to find a way out of her self-imposed isolation. Lily is one tough cookie, but even she cannot do it all alone. These books have a 'noir' feel to them - a hard edge. Very different I think, from Charlaine Harris's other work. I like Lily, I like Shakespeare, Arkansas and I recommend the books.To see the other titles in the Shakespeare series, use this link.