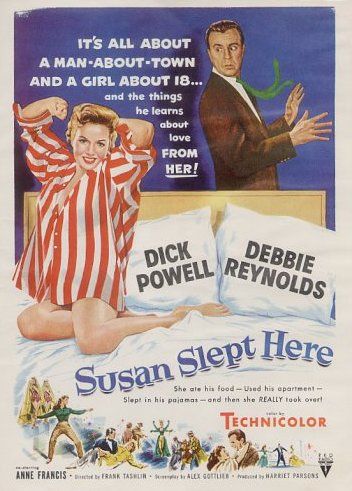 Tuesday's Overlooked Films is the weekly meme hosted by Todd Mason as his blog, SWEET FREEDOM. Don't forget to go take a look at the other overlooked films other bloggers are talking about today. Link. 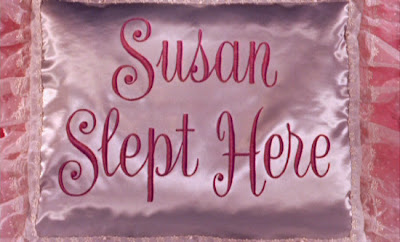 I first saw SUSAN SLEPT HERE with my mother at the Tribune Theater on the lower east side. (One main reason why I remember it so affectionately.) The Tribune was within easy walking distance of were we lived which made it our most often theater of choice. Can't remember what else was playing with it, in those days it was always a double-feature and depending on the time of day, + ten cartoons.

The film is available on DVD, though Netflix doesn't have it. 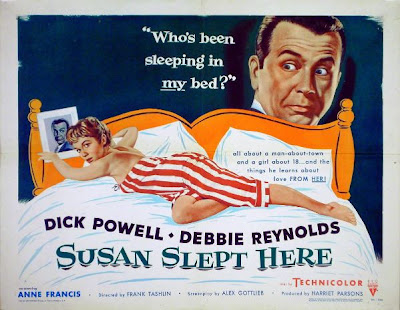 SUSAN SLEPT HERE , directed by Frank Tashlin, is one of those 50's films full of sexual innuendo under the guise of good hearty - but innocent - fun. It's harmless enough in a wink/wink sort of way. I was 12 when I saw it and it wasn't until later that I 'got' some of the implications. 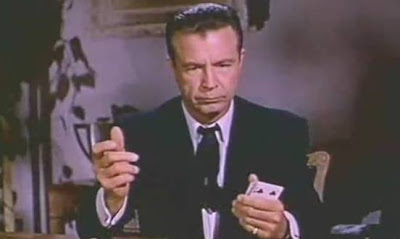 Dick Powell as Los Angeles screenwriter, Mark Christopher, is too old to be playing this particular character, he's supposed to be in his mid-thirties if I remember correctly -  but he looks in his late forties. Still, he's likable enough and he never pushes the leering quotient when it comes to his leading lady, the very young Debby Reynolds. In fact, for most of the movie he's annoyed with her insistent and vivacious presence. A presence that has unexpectedly intruded into his bachelor life.

Mark is an  Academy Award winning writer with a heavy-duty case of writer's block who is desperately trying to finish a screenplay dealing with juvenile delinquency. 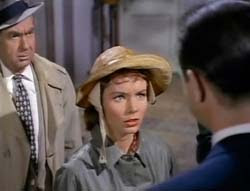 Debby Reynolds is at her spunky best as the Susan of the title. She's a tiny little lightweight thing in yellow floppy rain hat when we first meet her. She is supposed to be a  17 year old juvenile delinquent'. She can pass for 17 easily,  but as any juvenile delinquent you or I might ever meet - not so much. Still, we must suspend disbelief. Besides, the movie is loaded with fabulous secondary character actors who, in the 1950's (and earlier), made movie watching such a joy. 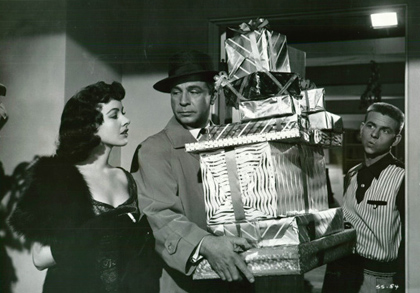 Mara Lane as the vampy next door neighbor.

It's Christmas Eve and the cops - Sgt. Sam Hanlon (Herb Vigran) and Sgt. Monty Maizel (Horace McMahon) - both born to play movie-cops - have picked up Susan Landis for vagrancy after she's abandoned by her mother. 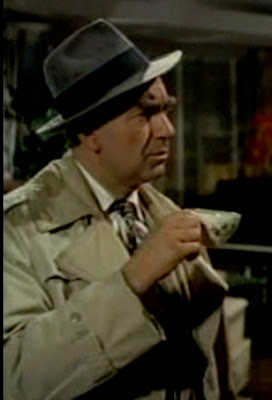 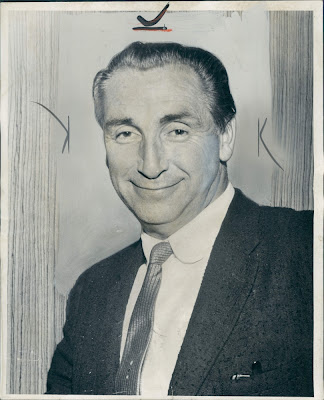 But the vice cops are the good-hearted sort and instead of arraigning her, they decide to drop her off at Mark's luxurious apartment. One of the cops knows that Mark is working on a juvenile delinquency theme for his new screenplay. (Makes no sense, I know, but hey, it's a feel-good movie.)

Susan doesn't want to be a charity case (I told you she was spunky) and she makes a big production out of not wanting to be left in an apartment with strangers - well, you can't blame her. - but eventually she relents. Better than spending Christmas in jail.

Not that Mark wants her there either, but eventually he relents out of the goodness of his jaded heart. It IS Christmas Eve after all, as everyone keeps harping. The kid needs help.

Mark lives the successful L.A. bachelor life but with additions. He has a wise-cracking secretary, Maude Snodgrass, played by the wonderful Glenda Farrell and an assistant, cynical friend and general dogsbody, Virgil, played by the perpetually pickle-pussed Alvy Moore and a maid, Georgette, played by the cheerful but doubtful Maidie Norman and a worried lawyer, Harvey Butterworth, played by another favorite of mine, Les Tremayne.  Tremayne was born to play worried fathers and lawyers, and occasionally a General, as in WAR OF THE WORLDS. 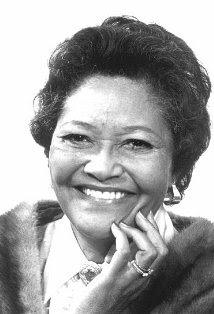 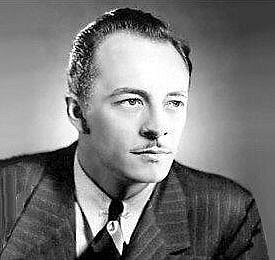 Susan develops an instant crush on Mark though he is literally old enough to be her father. (Remember, it's a movie.) But he has the maturity and the wit to realize that he could be in a whole hell of a lot of trouble if he even IMPLIES he's interested in her - which he isn't. He feels fatherly towards her - at first.

Susan worms her way into the household by dint of her keen observant eye and her accurate assessment of the undercurrents festering among the three main characters. She is someone who's never had any luxuries or known people like Mark and his friends so she takes a dim view while trying not to be too impressed. She is the single-minded sort though, so when, improbably, she decides that Mark is the man for her, she goes all out to convince him of her sincerity AND maturity. 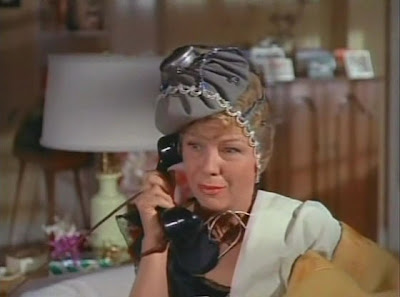 Glenda Farrell as Maude after a bit too much Christmas celebrating. 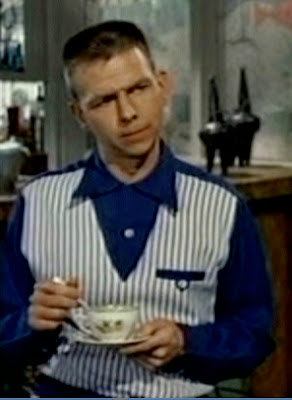 Alvy Moore as the sneering Virgil.

None of them are not sure what to make of her. Virgil resents her sudden prominence in their lives, he, cynically sees Susan as a gold-digging opportunist and though eventually she makes Maude an ally, Virgil is never completely won over. 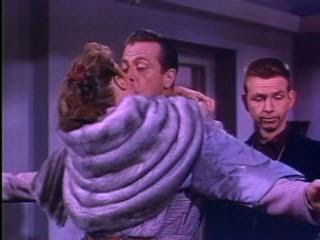 Mark has bought a mink coat for his girl friend, but Susan thinks it's for her.

When Mark finds out that Susan is facing some months in juvenile detention he does what anyone in his shoes would do -he takes Susan to Las Vegas and marries her. Though he does the gentlemanly thing and on their wedding night he makes sure that Susan is too tired (he takes her dancing all night) to honeymoon. 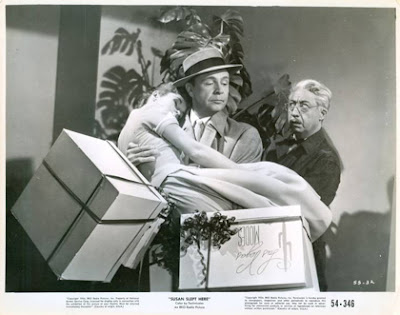 Then he drives her back to L.A. and leaves her with his pals as he runs off to his mountain cabin to finish his screenplay. The writing fire has been re-kindled and he suddenly feels the need for solitude. Who can blame him?

Ah, but here's the rub: Mark has an on-again/off-again girlfriend, Isabella Alexander, played by the beautiful and uber-sophisticated Anne Francis. She steals the movie as a dragon-lady who frightens men and small children. In her slinky black dress and turban hat, her eyes narrowed with suspicion, she is wonderful. She wants Mark back and she wants him NOW! Nobody can tap her high-heeled toes like Anne Francis. She makes a heck of an entrance. 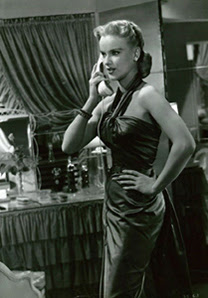 When Isabella finds out about Susan, the fur flies. It's scary. Ha! 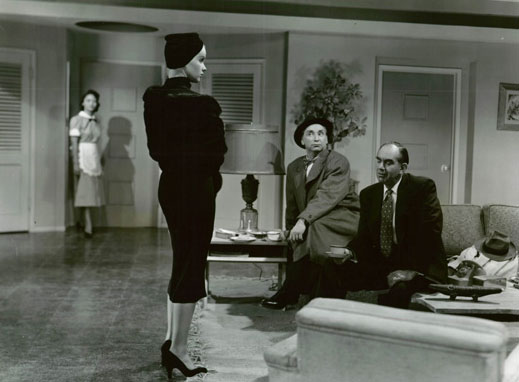 Eventually the cops take a stand when she won't take 'no' for an answer.

SUSAN SLEPT HERE is a pleasant way to spend a couple of hours, maybe around the Christmas holidays if you're a purist. It's harmless fun and even though I was never a big Dick Powell fan, I liked him in this bit of fluff. Oh, and there are a couple of totally unnecessary musical numbers though I don't remember anyone singing. 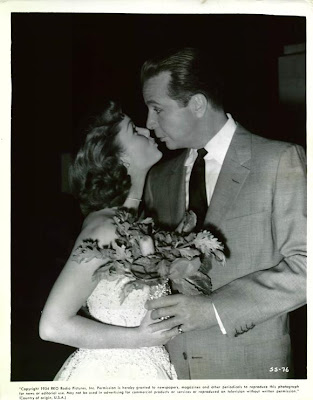 In the end, it all works out as Susan reaches her 18th birthday before Mark returns with his completed manuscript. Single-minded Susan convinces Mark they should stay married and they live happily ever after. 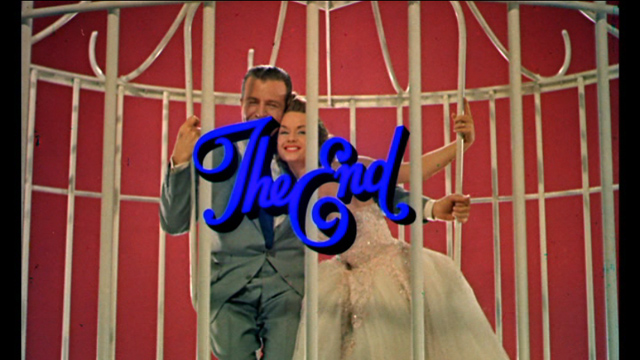 Two happily ever after love-birds. 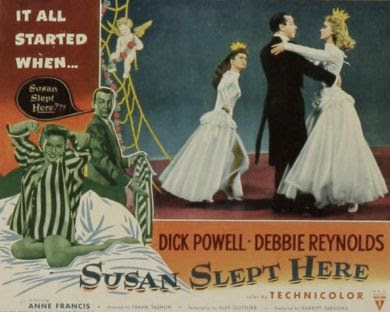