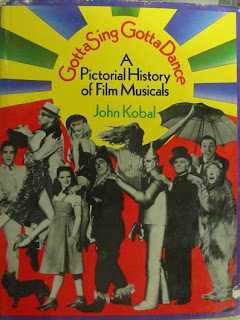 I've had this book for years - it was published in 1971 - and I still love it though it's looking bruised around the edges and the paper is beginning to yellow a bit. My only quibble with it is that all the photos are in black and white, I would have welcomed a few color spreads here and there. But then I rememebered that most of the photos taken in those days WERE in black and white.

I don't even mind the book's ancient publishing date since my feeling is that after the seventies there really weren't many (if any) good wow-za-palooza musicals to be had.

GOTTA SING GOTTA DANCE is divided into 6 chapters, after an introduction:

The Great Escape - The Hollywood Musical in the Thirties

The Golden Years - The Hollywood Musical in the Forties

Bring on the Girls

Each chapter is loaded with tons of info and wonderful photos (even if they are b/w), some of them eye-poppingly gorgeous. If you love musicals as much as I do, each photo will be an instant reminder of some fabulous dance number in some fabulous musical seen long ago . Of course the book makes you want to watch all these movies yet again. Leafing through GOTTA SING GOTTA DANCE, puts you in a self-induced haze of recollection, amazement and affection for the wonderful work done by so many incredibly talented and beautiful people.

Among the photos is a two page spread showing the MGM back lot set - the gorgeous mansard-roofed house used in the Judy Garland fillm, MEET ME IN ST. LOUIS. We see a scene being filmed - extras walking down the street in costume, the camera apparatus on a track and the crew. The whole block of several houses coast 100,000 dollars to build way back then. Imagine what it would cost today.

One of my favorite photos is one of Lucille Ball in feathered head dress and sequined gown, brandishing a whip at a bunch of glamour 'cats' - girls in  black sequined cat gowns and masks. Incredible. The scene is from the movie, BRING ON THE BEAUTIFUL GIRLS.

There's a bit of info on the casting of Jack Buchanan (who was splendid - practically stealing the movie from under the nose of Fred Astaire) in THE BAND WAGON. Originally Clifton Webb had been thought of for the role of the Broadway genius/renaissance man Jeff Cordova, producer Arthur Freed remembers , but '...he thought the character wasn't sarcastic enough, and suggested I take Buchanan." A fortuitous choice. 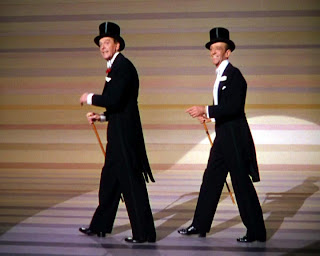 Jack Buchanan and Fred Astaire in THE BAND WAGON.
A snippet of Kobal talking about the popularity of two film types after the end of WWII:

The musical and the film noir were two sides of the same coin....With war villains gone, their abnormal psychology was grafted onto the gangrenous elements of American society, bringing a monstrous new life that was to flower through the decade.

Simultaneously, the musical reached its glory. The contrast could not have been more marked.

Whereas the 'film noir' mouldered in the shadows, the musical thrived in sunshine. Manifestations of the effect of family, and especially mothers, in these two types are amusing in comparison. In the musicals, the love of one's mother - especially at Metro - was the sign of a good American, in the other a sick one.

In musicals was the America of the public's dreams - healthy, happy, pumpkin pies and turkey; the psychological thriller was its dawning nightmare. In the musicals, it was not dark guilts that kept boy and girl apart, but a career on the stage or a little love tiff.....Both approaches offered unreality, escape, and both were essentially American film types. 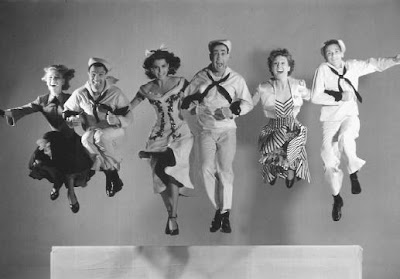 Vera-Ellen, Gene Kelly, Ann Miller, Jules Munshin, Betty Garrett and Frank Sinatra in ON THE TOWN (1949), an MGM musical filmed on location in NYC.
GOTTA SING GOTTA DANCE is a gold mine of information about Busby Berkeley, Fred Astaire, Ginger Rogers, Rita Hayworth, Gene Kelly, Judy Garland, and just about anyone and everyone who had anything to do with movie musicals from the 'silents' on.

Author John Kobal (1940 - 1991) had an extraordinary wealth of movie knowledge and over the years wrote many books filled with dazzling movie lore. If you'd like to know about him and his life, please use this link to the John Kobal Foundation.
Posted by Yvette at 2:36 PM