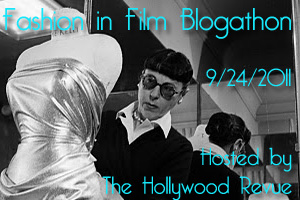 Today is Fashion in Film Day, a Blogathon hosted by Angela, at her fabulous HOLLYWOOD REVUE blog.

It's a day for us movie mavens to celebrate all the very talented people who created the costumes we swooned/swoon over at the movies. Let's face it, many a gorgeous outfit has saved a movie or two, so a film's costume designer is a very important personage. (And to think that in the early days, sometimes a costume designer went uncredited. Sacrilege!)

Don't forget check in at Angela's HOLLYWOOD REVUE and see what fashions and films other bloggers are featuring today. It's an extravaganza of film fashion!

Since nothing succeeds like excess, I've done two posts for today's Blogathon.

This first post features the dazzling costumes designed by American designer Travis Banton for one of the most fashionable women in films, Claudette Colbert as she appeared in Cecil B. DeMille's 1934 version of CLEOPATRA.

(1934 was a bumper crop year for great films. CLEOPATRA and THE THIN MAN were nominated for Best Film. The eventual winner was the wonderful screwball comedy, IT HAPPENED ONE NIGHT starring Claudette Colbert and Clark Gable who also won Best Actor and Actress Oscars.) 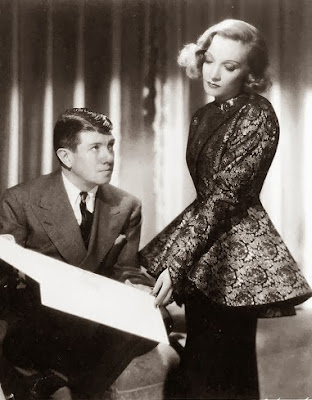 Travis Banton (1894 - 1958) was one of the more talented and important fashion designers of the 30's and 40's. He worked with, among many others, brilliant film director Josef von Sternberg, designing for style icon, Marlene Dietrich in three Sternberg films.


Banton was born in Waco, Texas, but the family moved to NYC when he was a child. He was schooled there - later studying art and fashion design and apprenticing with a society dressmaker. His work was noticed by Mary Pickford who chose one of his designs for her wedding dress.

Banton began designing costumes for the famed Ziegfield Follies on Broadway and soon moved on to Hollywood. His first film was, THE DRESSMAKER FROM PARIS, in 1924.  (Though it appears he might have worked as an assistant on an early silent film, POPPY, in 1917.) His last film job was designing the costumes for Rosalind Russell in AUNTIE MAME in 1958, the year of his death.

As well as Marlene Dietrich and Claudette Colbert, Banton's fashions styled many movie icons of the times, such as Pola Negri, Clara Bow, Mae West, Carole Lombard, Rita Hayworth, Betty Grable, Linda Darnell and even Carmen Miranda. Famed for his work's elegance and sensuality, Banton was chief designer at Paramount and was responsible for 'the Paramount look' created for the studio's stars. Later he also worked at 20th Century Fox and ran his own private fashion business.

Banton's assistant for twelve of those Paramount years was Edith Head who would go on to become the more famous, easily recognizable (for her bangs and dark glasses) multi-Oscar winner.

To learn more about Travis Banton and his work, please go to the following links: Film Reference, Travis Banton.  And here: Films of the Golden Age. To see more of Banton's costume work, please check Banton's Flicker page and google. 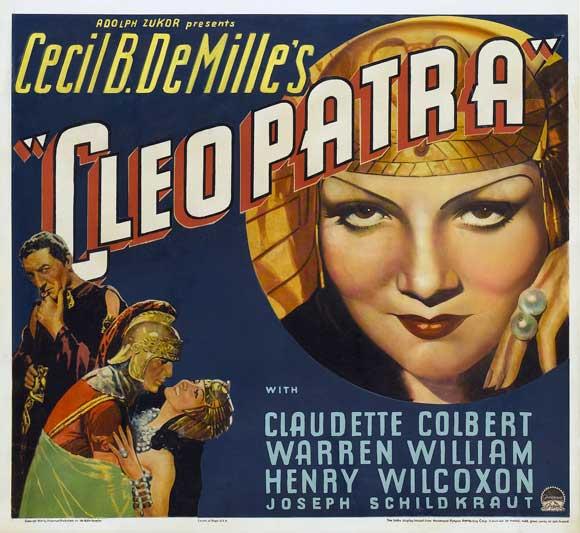 Though sequins, lame and chiffon would not have been invented in 29 (or so) B.C. that didn't stop Travis Banton from using same in his costume designs. Since when have pesky facts stopped the march of Hollywood glamor? 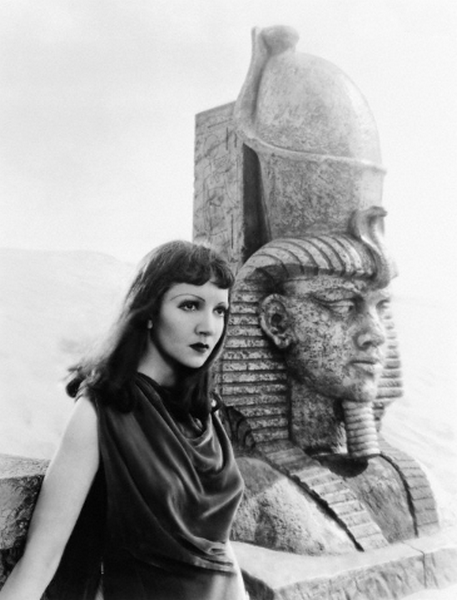 Cleo ousted from her throne by opponents and dumped in the desert to flee or die. Basic black is tasteful in any emergency. 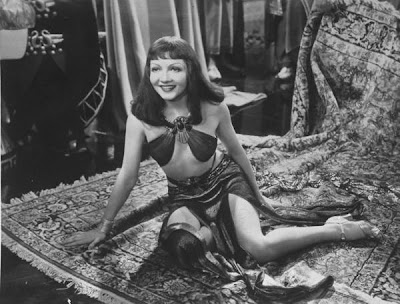 Cleo, smuggled into Caesar's presence rolled in a rug - revealed in all her skimpy glory. Note the saucy high heels. You think Cleo wore heels in life? Perhaps. It's not only diamonds that have always been a girl's best friend. 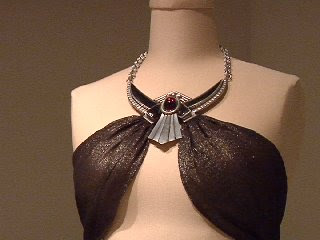 The actual halter top. This is my favorite of all the ensembles worn by Colbert in CLEOPATRA. She looked simply fabulous in this amazing top. 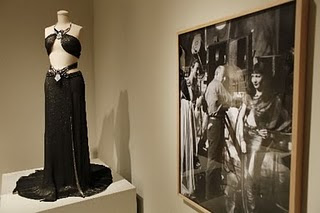 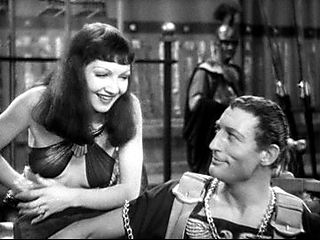 Cleo vamping Julius Caesar (Warren Williams) in her flashy halter. Williams' chiseled profile is pretty flashy in itself. Note the buckles on his shoulders. I don't think the Romans had these sorts of buckles then. But, maybe... 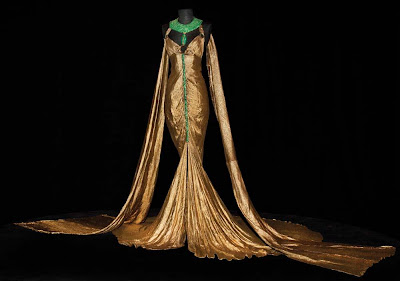 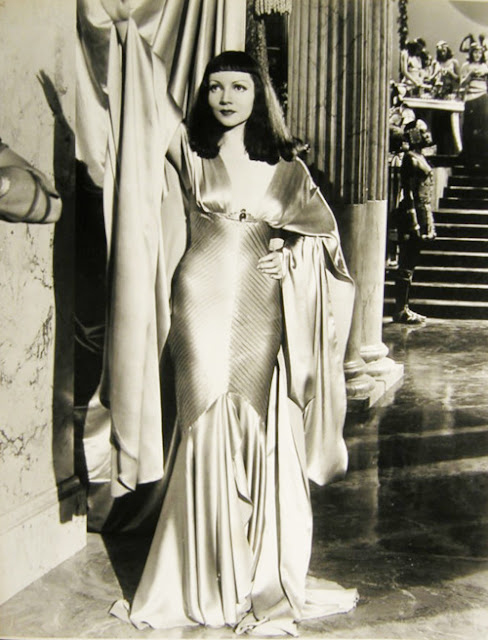 Gold, gold and more gold. Too much is never enough for Cleo. 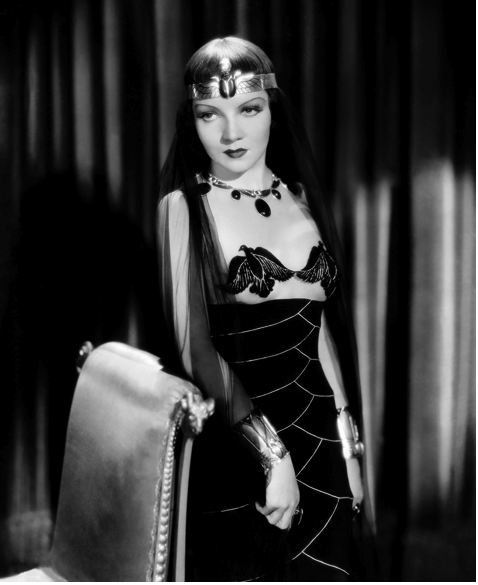 For a change of pace: Chiffon and pasties. Just the ticket for puttering about the palace. 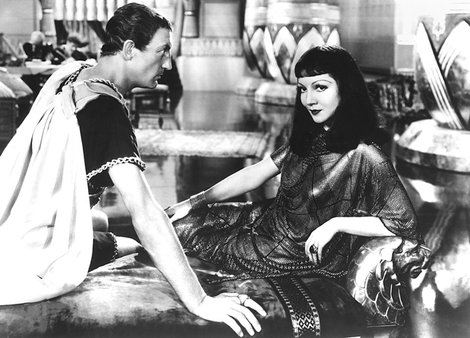 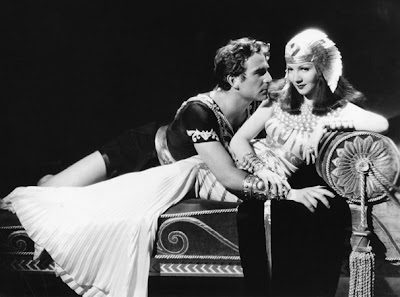 Neither did Marc Anthony (Henry Wilcoxon). You think the Egyptians invented pleats? I always thought it was Mariano Fortuny. 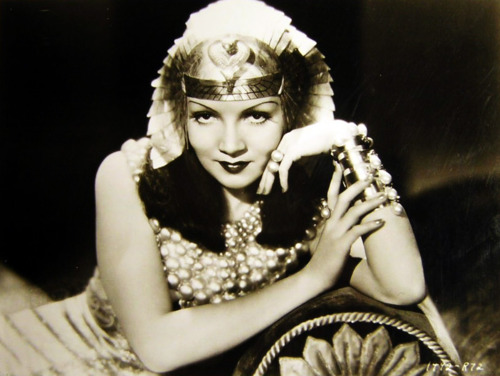 It's good to be the Queen. 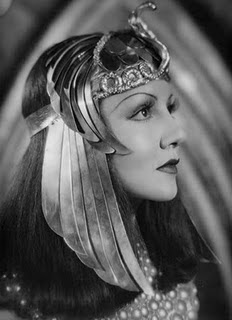 Besides gorgeous gowns, Cleo also wore these amazing headpieces all done in 1930's art deco style. A rare left profile shot of Colbert (unless they flipped the negative) who preferred her right. 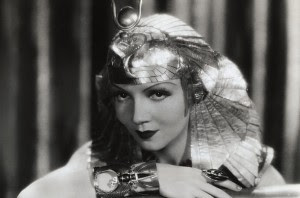 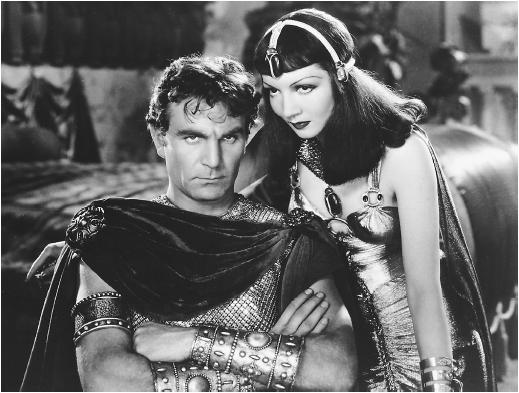 Despite Cleo's ravishing gowns and crowns, Marc Anthony still got down in the dumps. Men. 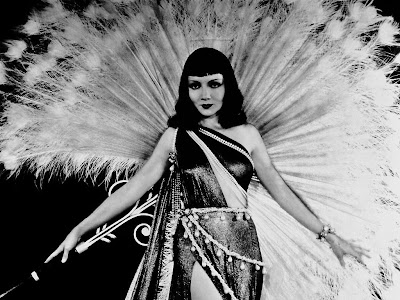 That's why the lady is a vamp. 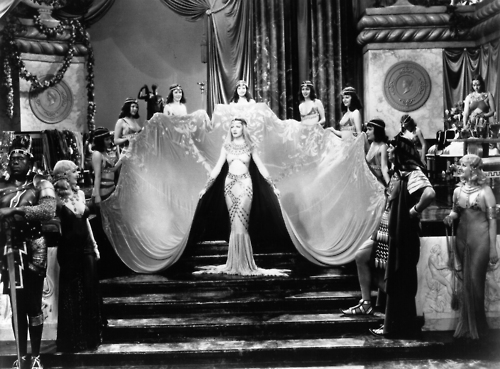 Just a little something I threw on at the last minute. 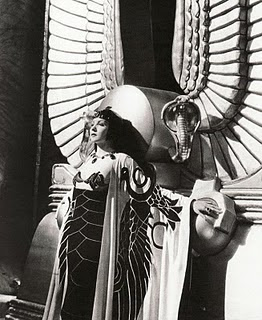 When will this torment end? 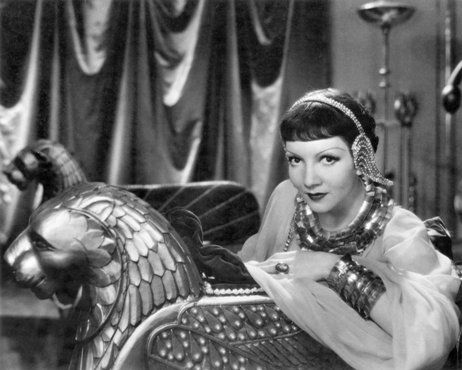 My kingdom for an asp. 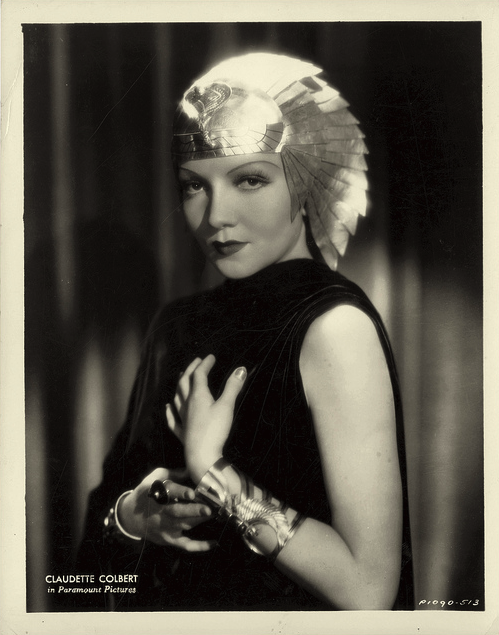 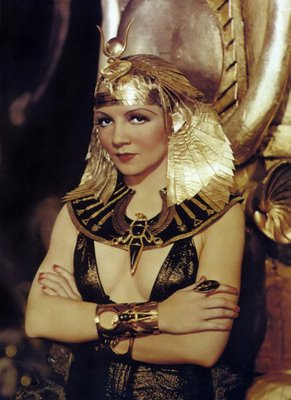 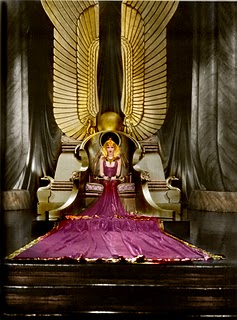