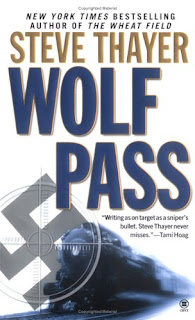 Friday again and that means, Forgotten Books, the weekly meme hosted by Patti at her blog, PATTINASE. Don't forget to take a look at the complete list of participants at this link.

I loved WOLF PASS when I read it a few years ago, though, for whatever reason I never liked the first in the series, the more well-known, THE WHEATFIELD. This happens sometimes. But it's hard for me to fathom exactly why.

Anyway, WOLF PASS is a thriller set in the midwest of 1962. Sheriff P.A. (Pliny) Pennington of Kickapoo County, Wisconsin is back. He is a former Army sniper called upon to solve a double murder in which he, himself, is the prime suspect. One of the victims is an ex-lover of Pennington's, she and her husband were shot at far range, sniper-style.

The actual killer is someone from Pennington's past, SS Officer Wolfgang Stangl, the Nazi who operated the prison camp from which Pennington once escaped. During the war, the two had played a deadly cat and mouse game. The trick is, Stangl has changed his appearance. He could be any man of a certain age living in or traveling through the county.

Pennington believes (though no one else does) that Stangl has somehow devised a lethal vengeance involving his ex-prisoner and what's more, it appears the former SS man is after President John F. Kennedy.

When a  beautiful Scotland Yard Inspector mysteriously shows up in small town America to help Pennington, the fast-paced plot speeds towards a stunning denouement.

This is one of those books that you dare not put down for a moment - it is THAT exciting. Author Steve Thayer has written several books, but this remains my very favorite. I wish he'd written more about Pennington.

To learn about Steve Thayer and read about his other books, please check his website.
Posted by Yvette at 9:30 AM