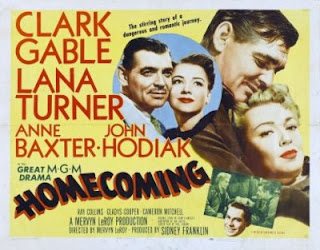 Tuesday is Overlooked Movie day around here as well as at Todd Mason's blog SWEET FREEDOM. There you'll find the list of links to other bloggers participating in this weekly meme for overlooked films and other audio/visual material.﻿
My choice this week is HOMECOMING, a romantic drama told in flashbacks that shift from home-front to WWII battlefield operations. A film very well directed by Mervyn LeRoy.

HOMECOMING contains one of my favorite Lana Turner performances. She is Lt. Jane 'Snapshot' McCall, an Army nurse, played as close to natural as Lana was probably capable of. She is actually likable in this film, her character is someone you'd want to know, someone not  trapped in the clutches of a heinous blackmailer or plotting to kill her husband or tearing her hair out over her daughter's peccadilloes. In other words, a 'regular' person. Well, as 'regular' as someone who looks like Lana Turner can be. She is really quite wonderful. 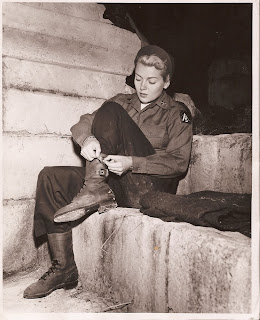 In Army fatigues and combat boots, her dazzling blond hair covered with a cap or helmet, Lana is as de-glamorized as a beautiful woman can be. The appearance of her character is a million miles away from the bored femme fatale draped in white in THE POSTMAN ALWAYS RINGS TWICE.

Clark Gable is no slouch either. This is one of my favorite of his many wonderful performances. He plays Col. Ulysses 'Lee' Johnson, a self-absorbed, over confident surgeon who joins the Army for no other reason than it's expected - not a doctor with an overly caring bedside manner. As the story progresses, his cynicism and steely composure are shaken as he finds himself grimly doing his best to save lives on the WWII front. 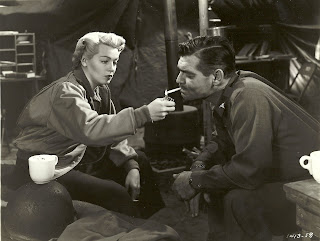 On a transport ship, he meets nurse Jane 'Snapshot' McCall. The do not immediately hit it off. She is everything he is not; caring, easy-to-like and devoted to her work. She is someone who will not put up with Lee's stiff-necked nonsense, even if he does outrank her. At first Lee doesn't know what to make of her, she is so obviously very different from the women at home. 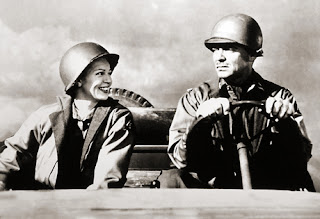 As the war progresses, Lee has his eyes opened by the devastating injuries he and his staff confront on a daily basis. He is grudgingly won over by Snapshot's gumption and selfless concern for her patients. They grow closer while he dutifully writes to his wife Penny (played by Anne Baxter) back home about his new found friend's expert nursing skills. When his letters contain one too many references to Snapshot (whom his wife at first took for a male colleague) she begins to suspect that Lee may be having an affair. 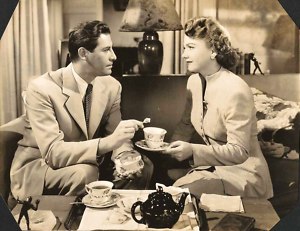 Her confidant is Dr. Robert Sunday (John Hodiak who was Baxter's real life husband at the time), a colleague of Lee's who'd locked horns with him over his methods, more than once.

There is no affair at the moment, but Lee is slowly getting emotionally entangled with Snapshot - their war experiences drawing them together as Lee also comes to realize what a self-centered failure he'd been in civilian life. And how his impervious-to-criticism medical methods might have actually harmed patients. 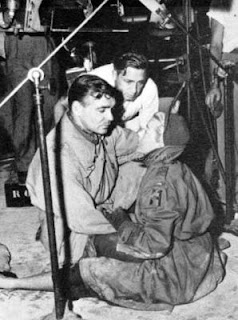 Gable and Turner taking direction.
Gable is very good in these developing scenes as Lee begins to change and grow as a human being. Then we see the guilt he feels as he realizes he's fallen in love with Snapshot and she with him.

In juxtaposition, the differences between women serving at the front and women back home is made apparent. The basic surface differences - at least - between the scruffy, ready for anything Snapshot and the manicured and patient Penny who can do nothing but wait at home are obvious. 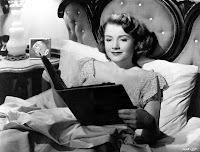 It's a lop-sided imbalance of course, because it's to be expected that being a doctor or nurse on the battlefront can't help but change a person. These are experiences that Penny will never really know anything about. In that she is at a major disadvantage. 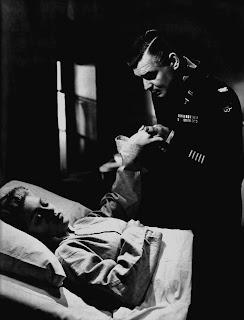 When Snapshot is gravely wounded at Anzio, Lee must suffer through it alone.

He returns home a broken man in need of understanding and comfort. In these last moments, Gable manages to look so deeply wounded in heart and spirit that he takes your breath away. It makes for a very powerful scene. Over the years I've watched this movie several times and it never fails to move me.

If you haven't seen HOMECOMING, I recommend it as one of Gable and Turner's better pairings. 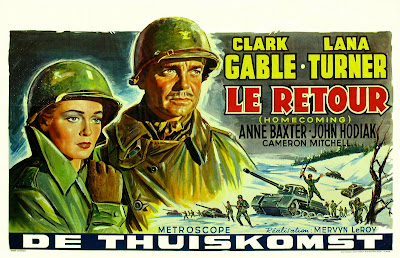 This is by far the best of the HOMECOMING posters showing the two leads as they actually appear in the film.
Posted by Yvette at 9:30 AM