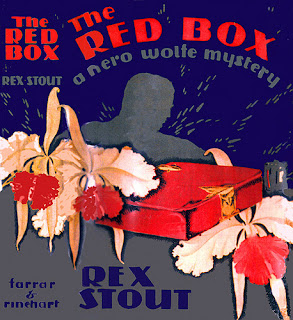 I hadn't meant to review this re-read, but loved reading THE RED BOX again so much that I feel like reviewing it just because it's such a damn good mystery. Don't know if you know this but Rex Stout's Nero Wolfe books make for great lunch time (or any meal time) reading. Why this should be so, I'm not exactly sure, but so it is. I've been re-reading them for awhile this way and have decided that Wolfe and Archie are especially good company at mealtimes. Try it sometime, you might like it.

THE RED BOX is one of the best of an excellent bunch. It concerns a young woman about to come into her inheritance and you know what trouble that usually brings. If people who wrote wills and left fortunes to offspring knew the kind of trouble their wishes usually stirred up....well, what is a rich person to do with all that money left lying around?

At any rate, Boyden McNair (back in the day, people had names like this), a Scottish ex-pat, runs a highly successful garment business in NYC. He is an overworked, troubled man and appears to be on the verge of some kind of breakdown when one of his models, Molly Lauck, is poisoned. She literally drops dead after eating a chocolate from a box she'd playfully filched off someone's desk. The police find cyanide in several of the chocolates.

Nero Wolfe gets involved when Llewellyn Frost (what did I say about names?) hires him to investigate since one of the young women in the room when Molly met her fate was his ortho-cousin (his words, not mine) Helen Frost and she might be in danger too. The police are stumped.

Wolfe breaks one of his cardinal rules because of a certain letter Llewellyn Frost produces and actually ventures out of the office, risking life and limb, and goes cross town to the garment district to McNair's place of business. Once there he endures all sorts of personal discomfort as he interviews recalcitrant people who don't want to be interviewed even if a defenseless young woman has suddenly died in their midst.

Wolfe perseveres even when his client has second and third thoughts about the unforeseen trouble a detective investigation has stirred up in his family. Especially when a second murder occurs - this time in Wolfe's office, right under the miffed noses of Archie and Wolfe just after Wolfe had finished telling the person that he was perfectly safe. Is such an indignity to be borne? I think not.

There's another, especially ruthless murder which occurs on a New York city street before the single-minded culprit is brought to light and the truth revealed at the usual group assemblage in Wolfe's office with Police Inspector Cramer in attendance.

Wolfe is called upon in this case, to lecture some young people who are being especially dense and does a good job of  reminding them of the realities of life. He is wonderful when it's necessary to hit people upside the head - metaphorically speaking that is. We also get to meet one of Rex Stout's more comically annoying creations in Dudley Frost, the garrulous father of Llewellyn, a man whose torrent of words can only be checked by waving a glass of good whiskey in front of his nose - the opposite of waving a red flag in front of a bull. 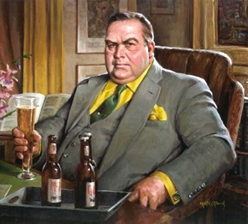 In many of the Wolfe books, Wolfe spends time reading and we're usually made aware of the book (or books) he is currently immersed in. This time out it's T.E. Lawrence's SEVEN PILLARS OF WISDOM (a book Wolfe has already read twice - so he's a re-reader too) and we get the following fascinating revelations from Archie on Wolfe's opinion (I'm assuming it is Rex Stout's opinion also) of Lawrence of Arabia:

He read until dinnertime, but even SEVEN PILLARS OF WISDOM did not restrain his promptness in responding to Fritz's summons to table. During the meal he kindly explained to me the chief reason for Lawrence's amazing success in keeping the Arabian tribes together for the great revolt. It was because Lawrence's personal attitude toward women was the same as the classic and traditional Arabian attitude.

The central fact about any man, in respect to his activities as a social animal, is his attitude toward women; hence the Arabs felt that essentially Lawrence was one of them, and so accepted him. His native ability for leadership and finesse did the rest. A romantic they would not have understood, a puritan they'd have rudely ignored, a sentimentalist they would have laughed at, but the contemptuous realist Lawrence, with his false humility and his fierce secret pride, they took to their bosoms. The goulash was as good as any Fritz had ever made. 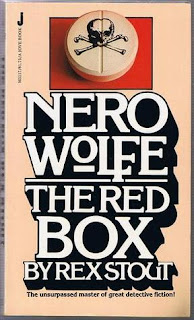