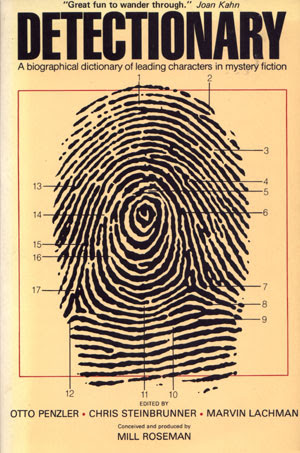 Friday's Forgotten Books is the weekly meme hosted by Patti Abbott at her blog PATTINASE.  Don't forget to check in to see what other forgotten books other bloggers are talking about today.

DETECTIONARY: a biographical dictionary of leading characters in detective and mystery fiction, including famous and little-known sleuths, their helpers, rogues both heroic and sinister, and some of their memorable adventures, as recounted in novels, short stories, and films.

What I like best about this book is the wealth of vintage information. The info is listed in short, concise paragraphs which make the book fun to dip into whenever the mood strikes.

Some of the books (and characters) listed that have always intrigued me, though I haven't yet had a chance to read them:

WARRANT FOR X (1938) by Philip MacDonald

American playwright Sheldon Garrett, wandering through the damp fog of a typical London day, stops at a a small tea shop for a warm drink. He overhears two whisperers plotting a crime. He knows neither the plotters nor their victim, only that a horrible crime will take place unless he can prevent it. He goes to Scotland Yard, but the police do not take him seriously. Fortunately, Colonel Anthony Gethryn hears his story and believes him. The monumental problem is finding the potential murderers. English title: The Nursemaid Who Disappeared.

MacDonald is also the author of THE LIST OF ADRIAN MESSENGER, made into a film which we talked about the other day here on the blog.

HEADS YOU LOSE (1941) by Christianna Brand

The aristocratic Miss Morland said, "Do you call that a hat? I don't call that a hat at all. Good heavens, I wouldn't be seen dead in a ditch in a thing like that." The next morning, Miss Morland was found lying by a ditch, the absurd hat perched grotesquely on her severed head. Detective: Inspector Cockrill.

DEATH OF A BUSYBODY (1943) by George Bellairs

Genial Inspector Littlejohn of Scotland Yard goes to the village of Hilary Magna to discover how the local voyeur drowned in the vicar's cesspool. A vivid picture of an English country hamlet in wartime enhances the proceedings.

Just a few of the titles listed in DETECTIONARY that I mean to read at some point. If I live long enough. Ha!

Okay, all together now: So many books, so little time!
Posted by Yvette at 9:15 AM