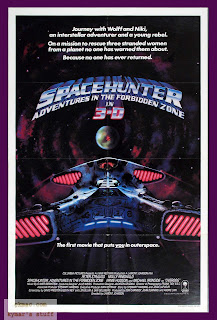 Tuesday's Overlooked Films is the weekly meme hosted by Todd Mason at SWEET FREEDOM. Don't forget to check out Todd's blog to see what other films and/or audio/visual entries, other bloggers are talking about today. 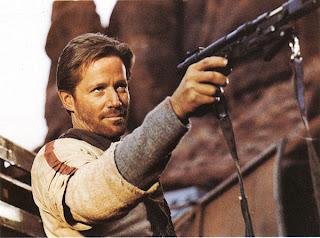 Peter Strauss is an odd duck. He had such a relaxed screen presence that it's always surprised me he never became a Big Movie Star. In SPACEHUNTER, he was the perfect action hero; confident, engaging, good looking and as I said, very relaxed on screen. He also had a gleam of intelligence in his eyes.(What good is a dumb hero?) Who doesn't love that combo in a leading man? In my opinion, Strauss should have had a similar career to Harrison Ford.

But stardom is a funny, chancy thing. There's no accounting for the combination that will catch fire onscreen. Maybe Strauss didn't have the 'everyman' quality that Ford did/does. Who knows?

SPACEHUNTER, directed by Lamont Johnson, is definitely not a great movie (though it appears to be a cult favorite). Surprisingly, it has an Elmer Bernstein score, but a decidedly lackluster one. I saw the movie in theater many years ago and just recently watched it again and thought, hey, it's not so bad. (It does have six writing credits. Two for story and four for screenplay. Not usually a good omen.) Or maybe it's that it's so bad it's good - that sort of thing. I know I've definitely seen worse. 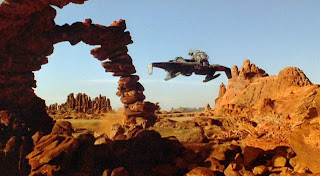 If you're in the mood for a space/western that doesn't need to make too much sense and has some interesting sets, aliens and costumes and you like Strauss's screen presence and don't mind Molly Ringwald's teenager in outer space routine, then you shouldn't mind spending some 90 minutes or so watching SPACEHUNTER. It really does hold up considering it was made in the ancient days of 1983 and released in flat as well as 3-D. The story:
Three space bimbos crash land on a planet that looks like Arizona desert and are instantly taken captive by some decrepit looking aliens. 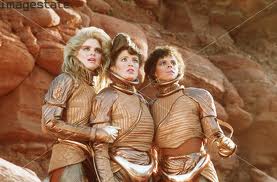 Later it appears they've been handed over to other aliens and soon after that they'll be kidnapped by still other aliens flying about in some wind-gliding type contraptions. But I'm getting ahead of myself. There are a lot of conflicting sorts on this planet  (mostly looking like humans) and I had trouble telling who was who and why and what. 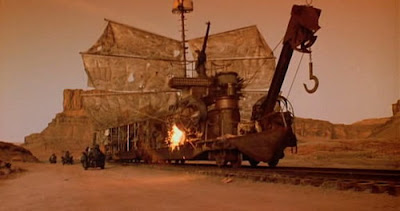 A reward is offered for the girls' return (sorry, young women) and a space message sent out to nearby ships. Peter Strauss as Wolff, a kind of space soldier of fortune picks up the message and lands on the planet along with his shapely android, Chalmers, played by Andrea Marcovicci. (She doesn't have much screen time, since she's zapped during a fracas and her body melts down before our very eyes early in the film.) 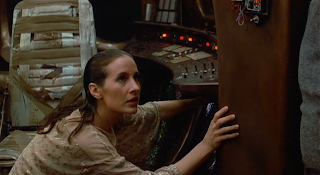 Anyway, Wolff is soon involved in said fracas between some aliens on a conveyance that looks like a sailing clipper ship but runs on tracks along the rocky ground, and a bunch of other aliens including some wind surfing types who scoop down and grab the three bimbos and sail off to their leader's hideout. The leader is an ugly space creep called Overdog- a humanoid/metallica man attached to some ominous looking black machinery. 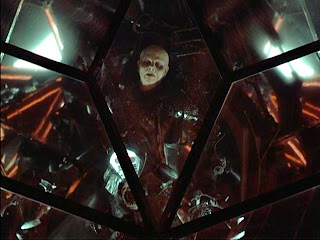 This is a white faced guy (played by Michael Ironside) who loves looking at pretty girls and does a lot of heavy breathing while doing the looking. Yuk! (He has a machine which enables him to inhale energy from the bodies of unwilling humans or 'earthers' as they're called in the movie - but that comes later.) He also runs an obstacle maze which no one can traverse without being stabbed, burned, plunged into a vat of acid or ground up like chopped meat by cleavers and other assorted spiked machinery. Since Overdog and his shouting minions don't appear to have television, this is their daily source of entertainment. Far as I can tell, at any rate. But again, I'm getting way ahead of myself. 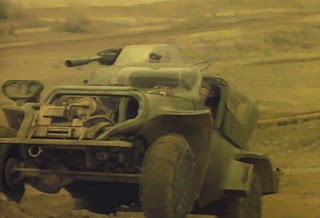 Just as soon as Wolff and his rough and tumble desert vehicle leave the one group of aliens behind, he stumbles onto another. Then for no reason that I can figure, up pops Molly Ringwald as Nikki, all dirty and scuzzy. She claims she can lead Wolff to Overdog central. Wolff grudgingly takes her along, though soon her stench forces him to take a detour. He gives her a bath, dunking her in a convenient desert pool. "Why you're just a kid," he says. 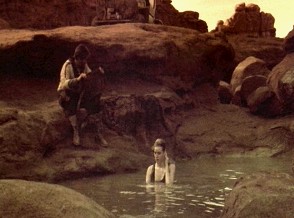 Okay, night time. Wolff and Nikki look for shelter in a cave and are soon on the run from some chubby pupa looking aliens (kind of like icky Michelin tire men) who plunge out of hanging chrysalis and holes in the roof of the cave. THEN Wolff and Nikki fall into a craggy cave pool which is soon populated by Amazons from the deep (with spears and sexy costumes) and THEN an ugly sea monster shows up. It's so hard to get a good night's sleep in outer space. 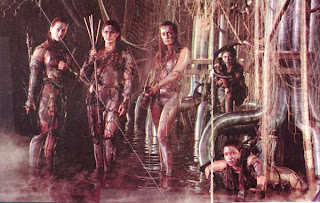 Oh, meant to mention, that at some point, Wolff runs into an old friend/adversary/fellow soldier of fortune named Washington (played by Ernie Hudson) who arrives on the scene in giant bucket of bolts vehicle with a front that looks like an earth mover/snow plow combo. They have a falling out but later join together to share the reward money should they find and rescue the three bimbos. 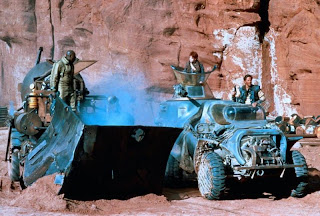 Okay, those are the basics. 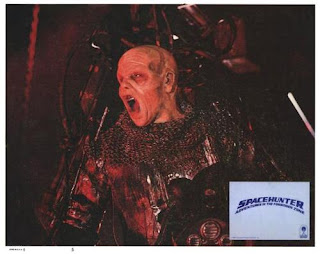 Of course, there's all kinds of zapping and fighting and rescuing and maze traversing (by Nikki) and overthrowing of Overdog who is attempting to drain Nikki of her energy/life force - the usual.
Lots of stuff blows up and for some reason, the three bimbos survive all this and in the end they are all saved and brought back up to Wolff's ship which, somehow, remained unmolested somewhere on the planet or - it's not made clear - up in space. 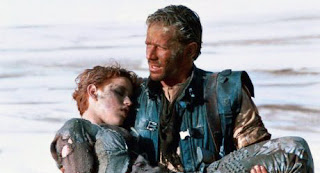 All along, as we clearly were meant to suspect, Nikki and Wolff have grown closer - he does save her life after all - and though he is very grudgingly drawn to her throughout the movie, he makes no moves except for a hug. He still considers her a kid. In the end they take off on his ship, for parts unknown. How long she'll remain a kid, who can tell.