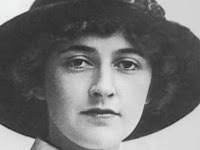 I specialize in murders of quiet, domestic interest.
Today is the birth date of the doyenne of crime writers, Agatha Christie. Where on earth would we all be without her prolific output of wonderful books, I don't care to think - over the years these same books have just given us so much pleasure. I graduated from Nancy Drew straight to Christie and thus began my life long love of the whodunit, not to mention all things British.

The Golden Age of Mysteries would not have been nearly as golden without Christie. She was an incomparable. So I say, thank goodness for  Dame Agatha and a very Happy Birthday to her. Wherever she may be, I'm sure she's still spinning mysteries.

Today's post will link up with Kerrie Smith's blog, MYSTERIES IN PARADISE since she hosts the monthly Agatha Christie Carnival AND the Agatha Christie Reading Challenge. Be sure and take a look to see what other Christie fans are posting today in celebration of The Birthday.

Be sure and check out the fun Agatha Christie Quiz at CONFESSIONS OF A MYSTERY NOVELIST. I did and I only got a 90. Missed one question. Shame on me.

To read more about Agatha Christie, her life and work, please go here. 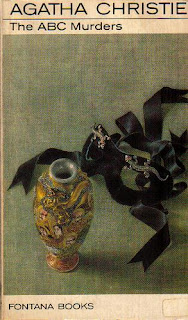 Who'd ever think of committing one murder and hiding it within several assorted murders to avoid being the immediate suspect?

Agatha Christie that's who. She was the first, far as I know, to come up with this devious plot device. Consequently this sort of murder is now referred to as an ABC. Ingenious.

When Poirot receives an anonymous letter taunting his prowess and stating that a murder will be committed soon, he worries that the letter may not, in fact, be from a mad man. He is right. The first murder is just the beginning of a curious, confounding case.

Poirot's old cohort in arms, Hastings, is visiting from South America and they're soon working together again to catch a cold-blooded killer. 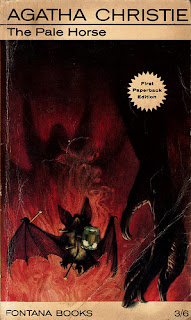 A terrific standalone minus Poirot or Miss Marple, this strange tale of murder for hire disguised as murder by witchcraft is one of Christie's best and weirdest plots. This time out it's police surgeon Jim Corrigan's turn to solve the crime when he finds a list of names in the personal effects of a brutally murdered priest.

This investigation leads him to a criminal conspiracy which defies belief, but Christie makes it all work. THE PALE HORSE reveals the conspirators early on, but the final brilliant stroke is left for the unveiling of the master criminal and the how to of the actual crimes which have stumped the police. Beware of red herrings! 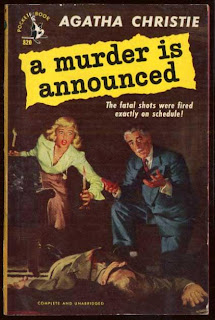 In the village of Chipping Cleghorn, everyone turns to the personal ads at the back of the Gazette to keep abreast of who is doing what in the small community. Imagine the surprise when a murder is announced in advance. Of course, the curious turn up at the home of Letitia Blacklock, at the intended hour, ready for a murder game of some sort - sherry and biscuits on the side.

However, Miss Blacklock denies any knowledge of the ad and can't imagine who would play such a terrible joke.

When a young masked man intent on burglary shows up and is promptly shot dead, Miss Marple and the very handsome Detective Inspector Craddock are soon on the case. This is only the first of several nasty murders which will keep you guessing until the very last moment. Christie takes into account the nature of village life and how, by 1950 it had all begun to change dramatically - one of the reasons the killer is able to commit the crimes. 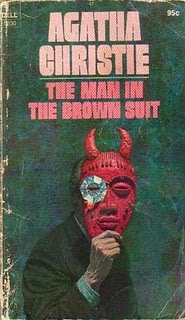 Another wonderful stand alone, though the enigmatic Colonel Race shows up (for the first time) in the middle of the book as a passenger on a ship bound for Capetown, South Africa.

When Anne Beddingfeld, an inventive and imaginative young woman, fixates on the idea of disentangling the mystery behind the man in the brown suit - after she's been a witness to the death of another man in an underground train station - she sets off on the grandest and most dangerous adventure of her life. This is one of Christie's fastest-paced mysteries. It is filled with derring-do, shipboard hi-jinks, romance, and a whole cast of intriguing characters.

None more so than Sir Eustace Pedlar, whose diary advances the plot as we switch viewpoints from Anne to Pedlar and back again.

I've lost track of how many times I've read this. It's one of several books I reach for when I'm feeling weary or ill or just out of sorts. THE MAN IN THE BROWN SUIT will soon set me to rights again. 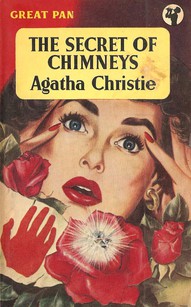 Another book I reach for time and again because it always cheers me up, most especially when a gloomy winter day comes along.

Chinmeys is one of those enormous English Country Houses where (in books, at least) weekend parties usually consist of shooting harmless birds or small mammals, drinking plenty of whiskey, AND murder. The house in this instance belongs to the inimitable Lord Caterham (one of Christie's most memorable creations) an aristocratic elder with too much charm and probably too much time on his hands. He is one of my favorite characters in the Christie canon.

A whole host of other characters show up for a weekend in the country, despite Caterham's protestations and dislike of politics. The list includes - besides family - a member of Parliament, foreign dignitaries, an American millionaire, a jewel thief, a contingent from a Balkan country whose representative is promptly murdered, and last, but certainly not least, a beautiful woman and a long missing adventurer whose last known gig was as a tour guide in South Africa. When murder is discovered, Superintendent Battle of Scotland Yard also joins the ensemble.

Before you can say Herzoslovakia, a murderer is caught, a jewel discovered and a King is placed on his rightful throne. 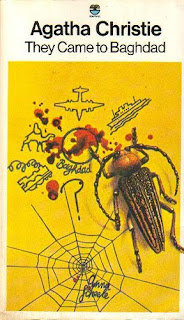 An escapist adventure set during the time when English tourists still travelled to Baghdad and the Middle East in general. A not-so-secret peace summit (which the Prime Minister as well as the President of the USA will attend) is scheduled to take place in Baghdad and all sorts of mysterious factions convene on Iraq to either make sure the meeting goes without incident or to disrupt the meeting by any means necessary.

In the meantime, a young woman back in England, recently fired from her job, has taken one look at a handsome young man in the park and is instantly smitten. He, unfortunately, is on his way out of the country, headed to Baghdad to work for some sort of peace through Shakespeare mission.  Once he leaves, clutching a photo of Victoria to his bosom, she decides  - on the spur of the moment - that since she has to get a new job anyway, she might as well work in Iraq. Makes sense to me.

How Victoria, the handsome young man, an enigmatic American secretary, an archaeologist, a government agent who is a master of disguises, other spies and various scheming characters all wind up in Baghdad followed by murder, kidnapping and other assorted crimes, is the greatest fun to discover.

Will the peace summit ever take place? Will Victoria get her man? I can guess. Can you? 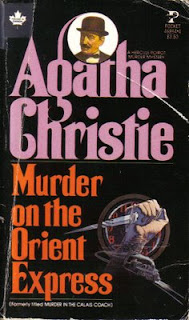 An ingenious plot, a wretch of a victim deserving of murder and more and a train full of suspects stranded in the snow - the Orient Express of the title.

When a sinister American industrialist is murdered in his train compartment, stabbed several times, Hercule Poirot - a fellow passenger - is entreated to help solve the crime, by a harried train official. He would prefer that when the tracks are finally cleared and the train continues on its way, the murderer be handed over to the authorities - a fait accompli -  thereby limiting the bad publicity.

How Poirot unravels this one is a wonder to behold. Another ingenious mystery which takes place in a controlled environment and yet the killer is not readily apparent. 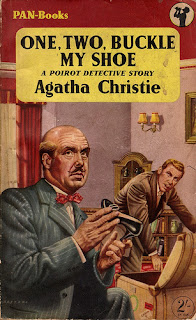 When Hercule Poirot's London dentist is murdered soon after treating Poirot, the Belgian detective must, of course investigate. Poirot's keen observational skills take notice of a certain shoe buckle which will later help solve a particularly wicked case of  multiple murder. The plot involves a charismatic government official, a long-held secret, a beneficial marriage and a murderer who delights in camouflage. 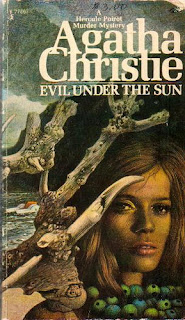 Hercule Poirot is on holiday on Smuggler's Island, off the English coast, when he is asked to help solve the murder of flamboyant actress Arlena Marshall. Marshall had been vacationing with her hapless husband and estranged young step daughter while at the same time, dallying with a married man who'd traveled to the island with his drudge of a wife, seemingly at Arlena's urging. So all kinds of swirling undercurrents had followed these characters (and several others) to the fun-in-the-sun resort.

Murder, Poirot deduced, could not be far behind.

A Miss Marple mystery which introduces us to the wonderful Lucy Eylesbarrow, one of Christie's more imaginative creations. Lucy is an incredibly proficient and intelligent young woman who'd attended Oxford and graduated at the top of her class, but had decided to go into domestic service rather than follow a more typical career.

An overnight success, Lucy become the darling of rich mamas who doted on her organizational skills with their children, their houses and their lives. She charged the highest fees, could pick and choose who to work for, and never took a contract that would keep her in the same place for more than a few months.

When Miss Marple's friend Mrs. McGillicuddy sees a murder from her train window she goes unbelieved (no body is found on the train or the tracks) by everyone BUT Miss Marple. The elderly spinster/detective realizes she's too old to go snooping about the countryside trying to find a hidden body and more, importantly, a ruthless murderer. So Miss Marple hires Lucy Eylesbarrow to investigate while working as a housekeeper at Crackenthorpe Hall.

The Hall is a large, old fashioned estate directly on the train line Miss McGillicuddy had travelled. Miss Marple brilliantly deduces it is the perfect place to dump a body from a passing train.

Again, we get an eccentric family - the Crackenthorpes - plenty of suspects and several more murders before the egocentric killer is revealed by a Miss Marple ruse.

To see a complete list of all Agatha Christie books, please use this link.

And what else to have today in celebration? Why a Hercule Poirot cake, of course.

(Cake created and posted originally at Cake Central by Shawnag)