5 Best Books is the weekly meme hosted by Cassandra at INDIE READER HOUSTON. Each week there's a new topic and 5 book picks to talk about. This week it's books set in, around or having anything to do with Academia. Okay, here we go. 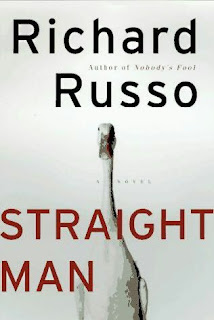 I can't do any better than the description used on Russo's fantastic fiction website page, so here it is:

During one tortuous week, Hank Devereaux, head of the English department at the state university in Railton, Pennsylvania, has his nose slashed by a feminist poet, finds his secretary is a better writer than he is, suspects his wife is having an affair, threatens wild fowl, and confronts his father.

A funny book. I am a major fan of Richard Russo. STRAIGHT MAN is one of the reasons why. 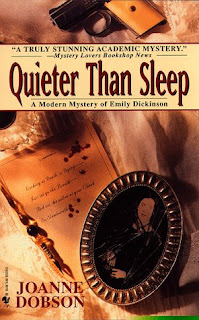 The first entry in a mystery series set at a small private college in New England. Assistant English professor Karen Pellietier confronts academic mayhem when the dead body of a another professor falls out of a closet and into her arms. This is certainly no way to earn tenure. Somehow she is soon caught up in helping the police when the poetry of Emily Dickinson appears to have something to do with the murder. A terrific series which makes the most of academic chicanery. Check this link to see the list of other books in the Karen Pelletier series. 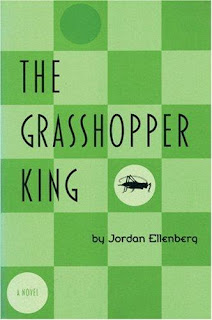 3)  THE GRASSHOPPER KING by Jordan Ellenberg

Yes, I know, I talk about this book every chance I get. But here, I have no choice but to bring it up again since most of the book takes place at or near Chandler State University a center for mediocre intellectualism. Chandler's one claim to fame is its Department of Gravinics dedicated to the study of the language, mythology and history of a small all but forgotten country set in the Carpathian foothills. That country's claim to fame is a dead (?) English expatriate poet named Henderson. Professor Stanley Higgs who heads the Department of Gravinics, is a world renown expert on Hendersons obscure poetry since he'd discovered a stash of Henderson's work (in the garbage) while traveling in Berlin.

Unfortunately, academic super star Higgs hasn't spoken in 13 years, which makes his lectures somewhat difficult. When Samuel Grapearbor joins Chandler's Ph.D. program, he is put in charge of Progessor Higgs. Samuel, while working on the difficult translations of Henderson's poetry,  must check in at the Higgs house every day and spend hours observing, waiting for the checker-playing Professor to make any kind of utterance. To that end Higg's entire house is rigged with tape recorders - just in case.

For my money, THE GRASSHOPPER KING is a brilliant satire of academia, marriage, the rewards of eccentricity, bad poetry and the general quirkiness of life.. The book is chock full of wry observation and absurd situations (often deadpan hilarious) as well as some pretty gorgeous writing. 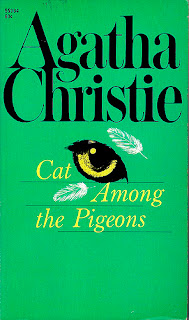 4)  CAT AMONG THE PIGEONS by Agatha Christie

Maybe the first murder at Meadowbanks, the prestigious and very exclusive boarding school for girls from the finest families in Europe, doesn't mean the end of the school, but the second and third murders certainly do. Or do they? Can the resourceful Meadowbank staff save the day? Will Hercule Poirot catch a ruthless killer in time? What do you think? One of my very favorite Christie books. 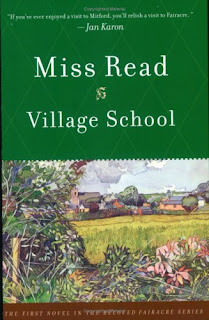 A gentle, affecting story - the first in a series (sort of, they can each be read as separate books also), set in the English country village of Fairacre. This is perfect reading anytime, but especially for when life has frazzled you. Written in the 1950's, Miss Read has the ability to make the most mundane things seem interesting. I guarantee that the day to day existence of this charming village and its small school will take you away to a time when life seemed very much simpler and people lived very different lives.
Posted by Yvette at 2:00 PM