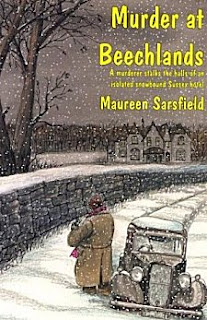 Lane Parry looks bigger than his car on this cover. I assure you, he isn't.
The second and last mystery (far as we know) ever written by author Maureen Sarsfield. This one features the usually self-possessed Scotland Yard Inspector Lane Parry as well. I reviewed the first book a few weeks ago and now here's the second and last. You know from that review that Sarsfield very mysteriously disappeared from literary history after writing MURDER AT BEECHLANDS and no one knows what happened to her.

This very talented writer either retired from writing or passed away or, perhaps, continued writing under another name. (I added that last one.) But I must admit that over the years I've never read any other book written in quite the same style as Sarsfield's. Can't even think who she reminds me of. I wonder if anyone's ever done a style search for more of Sarsfield's work?

Might be a good subject for a term paper or thesis.

At any rate, MURDER AT BEECHLANDS is written in the same wonderfully lush, heavy with atmosphere style as MURDER AT SHOTS HALL.  It made for some mighty fine late at night reading.

Inspector Parry's car gets caught in a snowdrift in the middle of a rampaging snowstorm in the wilds of Sussex. Lucky for him, he spies lights in the distance. The Beechlands Hotel is just a mile or so up the road from his abandoned car.

True, when he first arrives, snow-coated and exhausted, he thinks he's stumbled upon a lunatic asylum - the inmates outside having a snowball fight - but soon enough he realizes that it's just a hotel full of everyday assorted eccentrics. Made more so, by the almost immediate discovery of one of the guests, Wing Commander Lawton Lawrence, aka 'Lawty' lying battered and dead in the snow - having plunged from his upper floor window. Suicide?

Of course not. The womanizing Wing Commander was hit over the head by an ice hammer (what ever that is) then shoved over the window sill and sent flying into the cold night air.

What happens then - over one long, winter night - is Sarsfield's nightmare version of the charming country house weekend spent in the beautiful English countryside. A second murder occurs and the snow continues to fall, the phone lines having obligingly been cut - Parry and the rest are trapped in the isolated hotel with a murderer on the loose.

The guests had originally gathered at Beechlands to celebrate Wing Commander Lawton's home-coming. The hotel's owner Annabel Adams (a stately woman with an imposing bosom and a secret), had also planned to schmooze one of the guests into investing some necessary cash in her failing enterprise.

Beechlands is a money-losing rococo monstrosity full of red velvet flocking, golden gilding, flickering lights, dark halls, secret staircases, shadowy corners and a couple of dead bodies draped with sheets, lying in the dining room until daylight. Parry, annoyed by the imposition of it all, is determined to find the murderer before he or she does anymore damage.

When the killer makes an attempt on Parry's life and nearly succeeds, the Inspector is saved by the hotel's only waiter, the sneaky Gaston Leroux - a man known to Parry as Albert, a London thief released from prison and now, improbably, on the staff at Beechlands.

Parry quickly eliminates the three addled maids, while keeping an eye on Gaston/Albert and the faux French chef, but it's the list of overwrought guests who keep behaving as if at any moment they're about to be slaughtered which worry Parry most. This belief of impending doom is intensified by the copious amounts of liquor they're all consuming as the hours drag on.

Trapped at the hotel with the ever more grizzled and grumbling Parry are:

Marigold Trent, a gold- digging platinum blond vamp with a penchant for men and see-through clothing.

Christie Layne, a fade into the woodwork type called a 'braown maouse' by everyone thought Parry immediately notices that it's all a guise.

Cintra Norton: A very oddly behaving film star (well, odder than most) approaching middle age, whose life appears to be in determined chaos.

Paul Livingston: A potential investor who's come from London but keeps denigrating the hotel, to Annabel's dismay.

Julian Frake: Marigold's sugar daddy who is not above giving her 'paste' jewelry. He too is seen by Annabel as a potential investor.

Jim Bridges: An embittered architect with war scars and a reclusive nature. Wing Commander Lawton had broken up his marriage.

Sir Eric Hammerton: A hard drinking baronet who arrives late and leaves in the nick of time.

The night goes from bad to worse as the generator stops working, the lights go out and the jumpy guests bump about in the dark.

A terrific second book in this very short-lived series and the ending gives no clue that this would be Parry's last adventure. It's all very confounding.

Again, I thank the Rue Morgue Press for reprinting these two lost classics. Check their catalogue for these and other oldies but goodies.
Posted by Yvette at 12:21 PM