5 Best Books is the Weekly Meme hosted by Cassandra at her blog, INDIE READER HOUSTON.

Each week a different topic, a different list of interesting and intriguing books to ponder. Don't forget to check in with INDIEREADERHOUSTON to see what books other bloggers are posting as their 5 Best. (Once you finish reading mine, of course.)

This week's topic: 5 Best Books To Win A Prize.

One assumes when a book wins some sort of prize that it must be pretty good - goes almost without saying. But of course we know that a prize does NOT guarantee a great book. (There are no guarantees in reading.) Occasionally a prize will only set you up for major reading disappointment and even self-doubt. Been there. Done that.

At any rate, if you haven't read the latest Pulitzer or Booker or Edgar winning writer, then the subject is moot. I tend not to read a lot of 'literary' type books, so I miss most of the staggering, super-duper prize-winners. Still, I do all right. The following list is made up of  books I've read. 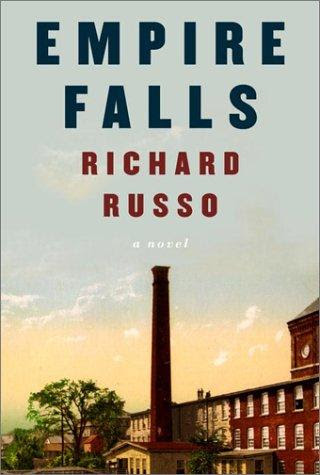 One of the few Pulitzer winning books I've ever read twice and will probably read thrice one of these days. (Though I read it the first time before it won the Prize.)

Richard Russo is one of only a handful of contemporary literary types whose work I read. Most of his books are set in the ragged and dusty, deteriorating small towns of upstate New York or New England. He has a fluid, easily distinguised writing style filled with wry, dead-pan humor.

Though his characters are recognizable, they never act predictably nor do they always give us what we want or expect. Russo's towns and villages and their inhabitants are often plagued with the detritus of disappointment yet he still manages to make day to day life in these lackluster locales riveting.

EMPIRE FALLS is set in a Maine town on the cusp of major change. Francine Whiting, aging widow and last of the once powerful Whiting family, a family that in the past  had been the largest mill owner, employer and polluter, especially of the Knox River, once the life and breadth of the area . Whiting has sold her assets to a multinational corporation. At the Empire Grill in the center of town, Miles Roby, a sweet, likable loser whose wife has run off with a customer and who longs for the unattainable woman of his dreams - still slings hash and harbors hopes of someday owning the Grill and setting his life to rights. The great charm of Roby lies in his self-deprecating humor which does little to hide a broken heart.

In between these two major characters, flows the life and times of the town and its citizens. Characters who will keep you engaged until the shocking climax which, in retrospect, is inevitable.

Won't say too much about this since I've got a review coming down the pike for later in the month.
(I did review the first half a while back and then had to return the book - unfinished - to the library because my skills at organized reading are totally under-developed.)

I will say that this book has gone on my list of Best Books ever read by yours truly. For me it is a powerhouse, one of those books that makes you realize, yet again, why you love reading in the first place.

THE AMAZING ADVENTURES OF KAVALIER AND CLAY is the story of two young Jewish men, Joe Kavalier - prodigy, magician's assistant, artist and refugee (after a hair-raising escape) from Hitler's Czechoslovakia and Sammy Clay, his Brooklyn born cousin. Bound together first, by events not entirely of their own making, then by talent and friendship, they manage to create a wondrous super-hero and a comic book empire based on nothing less than their dreams and fantasies of good triumphing over evil in a world often determined to prove otherwise.

A brilliantly executed book (Forsyth was a reporter for Reuters, the news agency and knew details of several failed attempts on Charles DeGaulle's life), set in the early 1960's, which tells two main stories: 1) the hunt by the French police and security forces for a hired killer known as 'the Jackal', a man whose identity we never do know and 2) the killer's side of it as he works coldly, competently and single mindedly to complete his assignment: the assassination of General Charles DeGaulle, President of France.

The main thing is, of course, that DeGaulle was NEVER killed. So we know the outcome from the beginning and still Forsyth's mastery of the plot line is such that we don't care that we know. We're caught up in the suspense, in the skillful way the story evolves as two sides work relentlessly towards their eventual and fateful meeting. This is the kind of taut, breathless, steel-nerved story telling that the word 'thriller' was invented for.

DAY OF THE JACKAL was turned into a superb film in 1973 starring the calm, cool and collected Edward Fox, perfect in the role of the pitiless  Jackal'.

The second Sid Halley novel by Francis who also won an Edgar for COME TO GRIEF the third Sid Halley.(All told, Francis won 3 Edgars.) Halley is an ex-jockey who has lost his left hand as a result of a track accident and later, a terrible beating by thugs. He has become a private eye and in this prize-winner, he is beset on all sides by various cases, one of which involves his ex-wife and another which involves the racing authorities. Halley, as always, is his own man, tough, pragmatic and capable, though no unrealistic super man. For me, it is the enigmatic personality of Halley which makes this book so engrossing.

This is only one of two books, by the way, to win both the Crime Writers' Association Gold Dagger AND the Edgar. The other being, THE SPY WHO CAME IN FROM THE COLD by John le Carre.

There was never anyone quite like Robert McCloskey, illustrator and story teller, and there never will be again. His black, white and tone, representational style pencil illustrations are instantly recognizable. (And yet he won another Caldecott for TIME OF WONDER in 1958, a book which featured paintings done in color.)

MAKE WAY FOR DUCKLINGS is a story that was probably read to every fortunate American child since it was written. (Along with BLUEBERRIES FOR SAL and ONE MORNING IN MAINE, my two other favorite titles. Though you can't go wrong with any McCloskey book.) Almost all of his books are still in print. Still in circulation. Still wonderful. 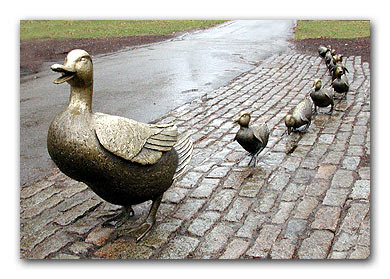 Read about the sculpture by Schon, installed in the Boston Public Gardens to commemorate Robert McCloskey's classic book, MAKE WAY FOR DUCKLINGS.

Read about the Pulitzer Prize named in honor of Joseph Pulitzer, HERE.

Read about the Caldecott Medal named in honor of Randolph Caldecott, HERE.

Read about the CWA Gold Dagger Awards, HERE.
Posted by Yvette at 10:38 AM