Dedicated to the one I love....But, not always. 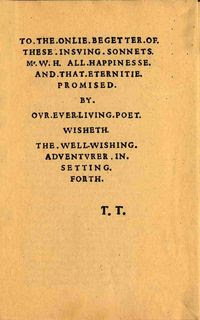 Shakespeare's Sonnets - Dedication page.﻿
Book Dedications. How many of us take the time to notice? While it's true that most of them are of the cut and dried 'To: so and so" variety, some can be touching or intriguing or even downright confounding. I always view the dedication as a peek through a keyhole into the life of the author.

I've rounded up some assorted dedications I've found in my own books - didn't go online to look for any. (Except  for the Shakespearean Sonnets page.) The following is a list of a few of my favorites either because they gave me cause for speculation or their very simplicity touched me or they made me smile.

What do you think? Do you notice these ordinarily brief one or two lines (with exceptions) to be found before the main title page in most books? You must, I'm sure. Do you have any favorites?

For David Parker and Daniel Parker,
with the respect and admiration of their father
who grew up with them.

From: EARLY AUTUMN by Robert B. Parker


To Warwick Downing, who got me started again, and
to the Denver antiquarian book trade:
the good, the bad, and the ugly

From: BOOKED TO DIE by Cliff Janeway

Welcoming you to the undeniably enjoyable and generally underrated sense of being known as existence.
From: SHADES OF GREY by Jasper Fforde

For my friend Harlan Ellison, whose work, more than any other, brought me to this place.

From: THE FIRST RULE by Robert Crais

For my father.
From THE AMAZING ADVENTURES OF KAVALIER AND CLAY by Michael Chabon
For my mother
From: THE RETURN OF TARZAN by Edgar Rice Burroughs
In memory of my father
Leigh Browne
also a banker
From: EYE OF THE ABYSS by Marshall Browne
To Mark Bould
Comrade-in-tentacles.
From: KRAKEN by China Mieville
To Sophie who has a quarter of a million pounds.
From THE PIRATES! In an adventure with SCIENTISTS by Gideon DeFoe
TO YOU
From DADDY LONG LEGS by Jean Webster
Thanks to everyone, human and equine, named in this book, which is dedicated to Casey, Sterling, Amber, and Fallon, who always have to take a backseat.
From: A YEAR AT THE RACES by Jane Smiley
To our grandchildren
Couriers of the Unexpected
From CLEOPATRA'S NOSE Essays on the Unexpected by Daniel J. Boorstin
In token of my of my admiration for his genius
This book is inscribed to Nathaniel Hawthorne
From: MOBY DICK by Herman Melville
To Julia Nelson and Fred Terry whose genius created the roles of Sir Percy and Lady Blakeney on the stage, this book is affectionately dedicated.
From: THE SCARLET PIMPERNEL by Baroness Orczy
To Beatrice -
darling, dearest, dead.
From: THE BAD BEGINNING Book the First - A Series of Unfortunate Events by Lemony Snicket
Once again to Zelda
From: THE GREAT GATSBY by F. Scott Fitzgerald


To Van,
who was there


To Jennie, as always, and to the friends and partners in research who have been so generous in so many ways: Michel from Chateauneuf, Michel from Fabrieres, Henriette and Faustin, Alain the truffle hunter, Christoper, Catherine, and Bernard. Mille mercis.

From: TOUJOURS PROVENCE by Peter Mayle


To Bryan Waller Procter;
From one of his younger brethren in literature, who sincerely values his friendship, and who gratefully remembers many happy hours spent in his house.

From: THE WOMAN IN WHITE by Wilkie Collins


'To my friends pictured within'

From: HOWARDS END IS ON THE LANDING by Susan Hill


One of my own favorite dedications is this heart-felt and lengthy one by T.E. Lawrence from SEVEN PILLARS OF WISDOM - A Triumph.

To S.A.
I loved you, so I drew these tides of men into my hands
and wrote my will across the sky in stars
To earn you Freedom, the seven pillared worthy house,
that your eyes might be shining for me
When we came.

Death seemed my servant on the road, till we were near
and saw you waiting:
When you smiled, and in sorrowful envy he outran me
and took you apart:
Into his quietness.

Love, the way-wary, groped to your body, our brief wage
ours for the moment
Before earth's soft hand explored your shape, and the blind
worms grew fat upon
Your substance.

Men prayed me that I set our work, the inviolate house,
as a memory of  you.
But for fit monument I shattered it, unfinished: and now
The little things creep out to patch themselves hovels
in the marred shadow
Of your gift.
Posted by Yvette at 2:07 PM