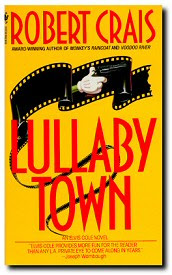 This is my entry in the Friday Forgotten or Overlooked Books Weekly Meme hosted by Patti over at her blog, PATTINASE. Don't forget to check out the other bloggers' Forgotten Books choices. There are always several intriguing titles in the mix. Link here.

LULLABY TOWN was the fourth in the Elvis Cole and Joe Pike series by the irrepressible Robert Crais, thriller writer extraordinaire. The books are normally set in Los Angeles and this one begins there, but then takes Elvis and Joe east to a new clime combo: NY and the Connecticut countryside.

When Elvis Cole is called in to track down Karen Shipley, the long lost ex-wife and son by the latest Hollywood phenom director, Peter Alan Nelsen (based loosely on a Steven Spielberg type), he  is leery at first. Nelsen is the kind of Hollywood local Elvis usually avoids; a man/child with over-the-top power and money and no emotional restraints - a 'Peter Pan' run amok. The first time Elvis meets Nelsen at the studio, the director is literally having a temper tantrum atop a table in his office. Uh-oh.

But, after all, Elvis is the 'world's greatest detective', at least by his own estimation, so he takes the case anyway. What he doesn't foresee is that he and Joe will eventually have to come up against a very deadly NY crime family. Things are different in New York.

I called Joe Pike at seven-thirty that night, L.A. time.

"It's me. I'm in New York on this thing, and it's heating up. Looks like the Mafia is involved."

"You got his number?"

Pike gave me a phone number. "Where are you staying?"

"Wait ten, then call Rollie. Try to survive until I get there."

He hung up. That Pike. Some partner, huh?

Part of the fun of the book is seeing how Elvis and then, Joe, survive on the tough streets of the city and in the Connecticut suburbs as they search for Karen Shipley (now Lloyd) and her son by Nelsen when he was then just another drop-out film student.

Finding Karen is no big deal for the relentless Elvis, but the case is complicated by the fact that Karen has gotten herself improbably involved in a Mafia scheme from which she cannot break free AND she no longer wants to have anything to do with Peter Alan Nelsen or his new found fame and fortune. She is not impressed that after years of ignoring him, Peter has suddenly decided he wants to be a father to their son Toby.

Events are made even more complex when Peter Alan Nelsen, tired of waiting in Los Angeles, shows up in Connecticut with his entourage thinking his fame carries weight anywhere he goes, thinking he can buy off anyone who gets in his way, including the Mafia. Uh-oh.

This is another very well done yet less well-known early entry in the continuing saga of friendship between two men, which to my mind is the basis of the entire series. The strength of that friendship is the glue that holds it all together.

A couple of things I love most about LULLABY TOWN:

One - The usual banter between Elvis and Joe and Elvis and everyone else. The scene when Joe shows up out of the blue and in the nick of time in a Manhattan back alley just as Elvis is cornered by some Mafia hoods and Elvis's reaction is the very cool, "What kept you?" - is worth the price of the book alone. If you're not wide-eyed and grinning at the end of this scene, put the book down, it's not for you.

Two - I like the secondary storyline which is basically about a man forced to grow up in a hurry. About how tragedy, caused mostly by a total lack of understanding how the 'real' world works, changes a character forever. Elvis and Joe, in cohort, are shown to be examples of  how 'real' men, competent men, behave in crisis. Extreme dramatic crisis, it's true, but Crais uses the guise of a mystery/thriller to get the point across. It's a good point to make any time.

Something else: There are two concurrent 'parenting' story lines going on in LULLABY TOWN, you pick up the dichotomy of it as you go along. A bit of 'sins of the father' type influence. One kid who is saved at an impressionable age, one man who was not. One kid who matures almost too late, one who never does. But maybe I'm stretching the point. For me, this was evident beneath the surface.

There is also my very favorite action sequence in almost any book EVER, near the end of LULLABY TOWN. When all appears to be over, happy ending in sight, and suddenly it isn't. When the bad guys show up unexpectedly in the middle of a quiet Connecticut evening, intent on murder. When Elvis and Joe must not only stand up to overwhelming force to save themselves, but also to save the lives of a man, a woman and their child. I re-read this sequence occasionally just to remind myself what terrific, spell-binding, pulse-pounding, thriller writing is all about.

When it comes to this sort of thing, there is absolutely no one better than Robert Crais.

Here, by the way, is a link to an interview done recently with R.C. for Venice, a California magazine.

Robert Crais
Posted by Yvette at 9:40 AM